Where were you 15 years ago today? I can tell you exactly where I was … picking up my Dreamcast.

9/9/99 was the U.S. launch date of Sega’s most forward-thinking chunk of hardware. Unlike today, where consoles struggle to monopolize the living room’s multimedia experience, the late ’90s and early 2000s were the sunset of an era where console hardware was rigidly focused on doing one thing very well: deliver better gaming content than the competition.

Sega knew that in order for a console to dominate the competition, it had to have a strong library. The developer pulled together an amazing Dreamcast lineup with one of the better, if not best, ratios of good vs. bad titles to date. A big part of this was the console’s strong support from key third-party publishers who were hot at the time, like Capcom (the Resident Evil series) and Namco (SoulCalibur). Even more impressive, however, was the console’s first-party support.

Above: Rez received a high-definition re-release on Xbox Live Arcade in 2008.

Sega bankrolled incredibly risky and highly creative endeavors within its development teams. These games may not have pulled the Dreamcast out of its doomed financial situation, but they bought the company decades worth of clout. Games like Shenmue, Phantasy Star Online, Rez, Jet Set Radio, Chu Chu Rocket, Space Channel 5, Sonic Adventure, Crazy Taxi, and Seaman all introduced amazing innovations in gameplay and visual design and they continue to influence today’s industry. Shenmue, for example, was an early example of an open-world game that came out two years before Grand Theft Auto III blew the genre wide open. And Seaman predicted Microsoft’s Kinect voice controls by making talking to your TV a gameplay mechanic instead of just crazy, suspect behavior.

And experimentation didn’t stop at the software. Sega’s console also introduced features that have become standard. For example, the broadband functionality and SegaNet were early steps toward today’s console online gaming and marketplace solutions. And the Visual Memory Unit (VMU) was an early attempt to convince developers that their interactive experiences didn’t have to begin and end at the console.

It’s safe to say that I think the Sega Dreamcast is an incredible footnote in our industry’s history, and luckily, some of my GamesBeat colleagues agree with me. To celebrate, I’m handing out some Sonic party plates, cutting up a gigantic imaginary cake shaped like Hidekazu Yukawa (then-senior managing director of Sega and system spokesperson), and asking everyone to share their fondest memories of one of the most beloved consoles of all time.

You can partake in the reminiscing party as well. GamesBeat would love to hear about your favorite Dreamcast moments in the comments section below. If you need more incentive join in on our red-swirled lovefest, we’ll be picking one of your heartfelt stories at random, and the chosen commenter will receive a free code for a downloadable game from our collection.

Falling in love with SoulCalibur

Above: “Please … come back.” — Street Fighter

I wasn’t sure if I wanted to write about the novelty of playing broadband-enabled console games online, the memorable marketing campaign — including Sega hiring Saturday Night Live alum Kevin Nealon to do a Weekend Update-style presentation to the press — or the hours and hours (and hours) I spent on Phantasy Star Online.

But the single thing from the Dreamcast era that had the biggest and longest lasting impact on me? SoulCalibur.

Yes, this 3D fighting game existed in arcades well before it landed on Sega’s machine. But it didn’t look this gorgeous or run this smoothly. And with at-home, anytime, coin-free access, my friends and coworkers could practice and play all we want, continually learning the game’s intricacies and refining our strategies until we all became straight-out obsessed.

SoulCalibur took up our lives and waking hours, both on and off the clock. (Luckily, I was working at the magazine Electronic Gaming Monthly, so game breaks were the norm.) We ran office tournaments. We even had a daily challenge ladder system, just to give us more excuses to play during the workday. We were playing SoulCalibur all the damn time, and when we weren’t, we were talking about how we wish we were.

I knew the game was “the one” when I said to my friend over a beer sometime in 1999, “You know what? I think I like SoulCalibur more than Street Fighter.” I won’t get started on how meaningful that other fighting game is to me, but let me just say that, at least for this nerdy gamer, that was one bold statement to make. 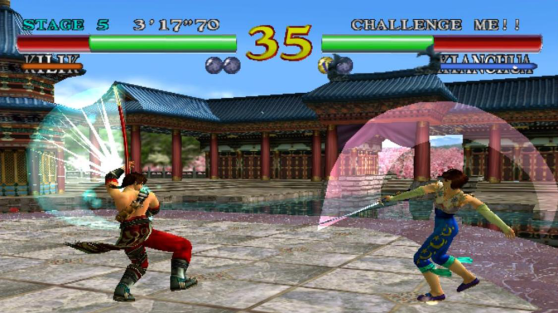 Above: Damn it, Kilik. Stop running away.

I remember Sept. 9, 1999 vividly. Yes, it was the day that Sega released its beloved but ill-fated console, but it was also the day I got into my first car crash (just a week after getting my license).

The school day had just ended, and I drove my 1980 Chevy Malibu — which, as it turned out, was just as beloved and ill-fated as the Dreamcast — straight over to my friend Scott’s house. See, he had been talking all day about how he had duped his parents into getting him Sega’s new console on launch day. And after months of reading in my favorite magazines about long days ignoring writing and work to play SoulCalibur (hi, Shoe!), I was geeked to finally get the chance to try it for myself.

Publisher Namco’s 3D fighter gave us the first real look at the future of gaming. Its intricate details and fluid animations were beautiful. It was also highly competitive, and my entire group of friends showed up to take turns playing into the night.

At some point, my parents called Scott’s folks to find out where I was (this was before cellphones, although I think I had a pager that I never checked). Reluctantly, I piled into the Malibu with another friend, Matt, who also needed a ride and lived down the street from me.

Above: The soul of your slightly used American automobile still burns!

During the short drive, Matt and I got into a heated argument about how he could only win if he spammed one of Nightmare’s (the game’s gigantic, armor-wearing swordsman) cheaper attacks. Well, maybe I was paying too much attention to the fight and not to the road. Maybe I started going a bit too fast and went into a turn slightly too fast.

I felt the back tires start to fishtail, and I slammed on the brakes.

There was no coming back from that.

Next thing I knew, the rear passenger side of my car had slammed into a fire hydrant, and my bumper decided it wasn’t really feeling up to being part of the car anymore.

I don’t blame SoulCalibur … but I do blame Matt and his cheap tactics.

The next year or two, we all spent a lot of time over at Scott’s playing the Tony Hawk skating games and that drawer-opening simulator Shenmue, but I’ll always most associate Dreamcast with my first car wreck.

Renting a Dreamcast from Hollywood Video 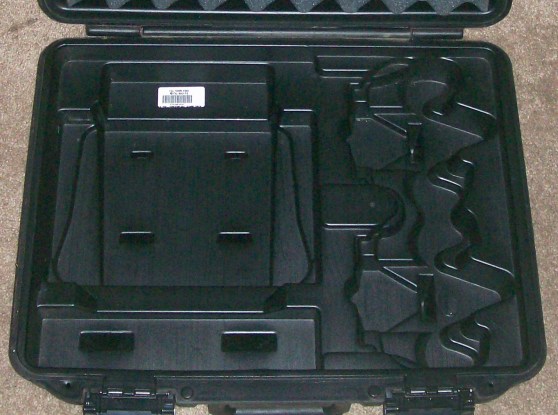 Above: Renting a console meant walking out of the store with an awesome, padded suitcase. You felt like a secret agent.

I realize as I type this that it’s kind of weird that my favorite Dreamcast memory happened before I even owned one, but so be it.

The old media-rental chain Hollywood Video let people take home the system before Sega even released it. Bback in the ’90s, I was a huge Sega fanboy (I seriously strained some grade school friendships over Sega Saturn/Sony PlayStation debates), so getting a Dreamcast early, even temporarily, was equivalent to winning the lottery … in space … along with an unlimited supply of Surge and Dunkaroos.

Even when I first got my hands on a PlayStation 4 and Xbox One this past year, I lamented the fact that a next-gen leap will never feel as momentous as it did when I first booted up my borrowed Dreamcast. I also rented Sonic Adventure, which looked like the slickest, smoothest bit of gaming I had ever seen. Sure, the 3D platformer hasn’t aged as well as Mario 64, but at the time it felt like a revelation. This was the future of gaming.

The only downside was that we couldn’t rent a VMU along with our system, so we couldn’t actually save our progress. Of course, being the responsible kids my brothers and I were, we just left the system on all the time until we had to return it. I mean, who wants to keep starting Sonic Adventure over from the beginning? Even back then, I couldn’t only take so much of those cutscenes.

I have to say, I had never come close to committing a crime in my life, but I seriously contemplating keeping the Dreamcast and telling Hollywood Video that the dog ate it. To hell with the safety deposit.

Today, the Dreamcast is the only system from before the Xbox 360/PlayStation 3/ Wii era that I keep near my TV. Honestly, I don’t play it all that much anymore. I just feel better knowing that it’s there.