Atlus’s Persona Q: Shadow of the Labyrinth on the Nintendo 3DS is not only a smart idea but also a project that makes a lot of sense. Game crossovers aren’t anything new, but this is one of those rare moments where the meeting of two series is both complementary and well-timed. In this case, both properties have had years to grow substantial fanbases that would justify this kind of collaboration.

As a spin-off of the popular Persona series — which itself was an offshoot of the Shin Megami Tensei franchise — Persona Q is a Japanese role-playing game (JRPG) and dungeon-crawler that uses the less well-known Etrian Odyssey as its foundation. The more hands-on time I got with it, the more I believed that developer Atlus made every effort to make this title equal parts Persona and Etrian.

For example, as much as the game could have used the popular character designs of Persona 3 and 4, Shadow of the Labyrinth actually reworks that series’ supernatural high schoolers with character designs more akin to the art style of the earlier Etrian Odyssey games. This endearing, big-headed look not only makes Shadow feel like a thoughtful melding of the two properties but also an inspired, alternate design of these characters. This is all the more significant since many Persona fans are drawn to the series primarily because of the characters. It’s a collaboration makes even more sense since both properties are from the same developer/publisher, which is something you can’t say about the upcoming Dynasty Warriors/The Legend of Zelda hybrid, Hyrule Warriors.

My play session made me optimistic that Persona Q also wouldn’t be a mere Etrian Odyssey reskin. First, the story takes place within the timelines of Persona 3 and 4 and is canonical to that universe. Furthermore, the game will reveal new backstories of the familiar cast, making Persona Q even more enticing for those who can’t get enough of the series’ mythos. Long-time fans can also count on the plushie Teddie and loyal canine Koromaru to supply much of the game’s comic relief.

The backdrop is the most popular of all annual high school activities: the multithemed cultural festival. Like these celebrations, each dungeon is a specially designed area. The first has an Alice in Wonderland look while the second looks like a hangout called the Group Date Cafe. The café is a nod to the Persona series’ strong social element. Since Persona 3, the series has used Social Link, a conversational mechanic where the protagonist bonds with characters for stat and ability enhancements. Persona Q presents the player is with a series of questions, and the answers decide whom the protagonist’s partner will be for the encounter with the dungeon’s main boss. 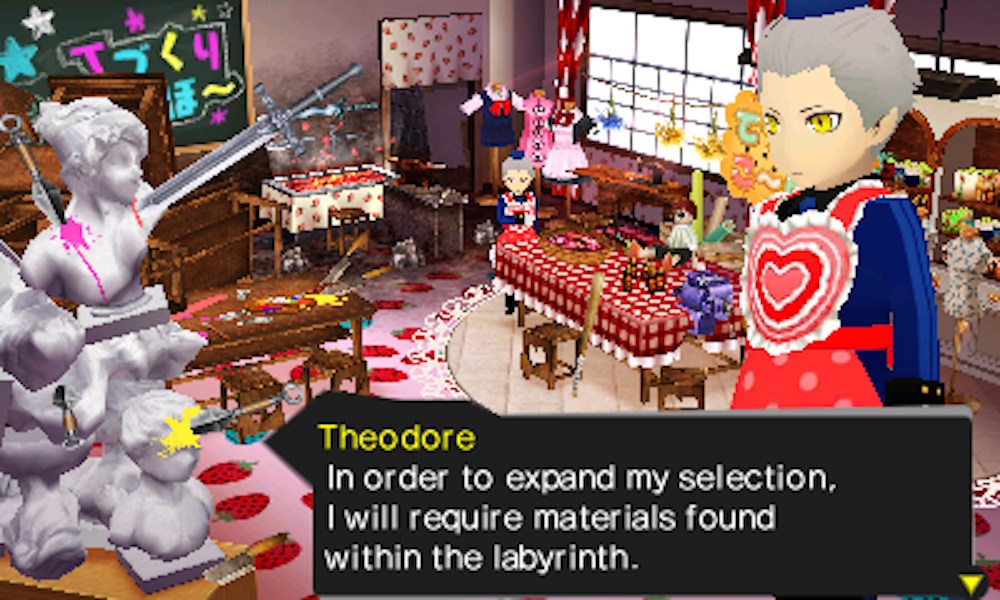 Above: Even Persona servant Theodore is in Persona Q, sporting a manly heart-shaped apron.

With deep dungeon-crawling comes many trials

It’s a case of compounding difficulty when you layer the challenges of the Persona games with the patience needed to endure the grind of Etrian Odyssey. The latter series has benefited greatly from dual-screen Nintendo handhelds since the touch-sensitive bottom half makes for a useful and immensely practical map-making tool. It’s all the more handy in Persona Q, especially when you’re navigating dungeons that are large even by Etrian standards.

Keen awareness of your surroundings is all the more crucial when these maps are full up with unfriendlies. Tricky enemies, like turrets that attack when you approach their line of sight, reverse your movements with a single hit; if you intended to go left, you’ll go right instead. As in Persona 3 and 4, these students will have their own melee and ranged attacks and supernatural beings, the Personas, as support.

Yet with all these combat options, learning how to use the maps’ environmental puzzles can make a huge difference in making further progress or avoiding having to revisit a map several times. For instance, the Alice in Wonderland dungeon wouldn’t be complete without a bunch of roses to paint red. But recoloring them white will distract certain enemies and make some areas easier to get through. 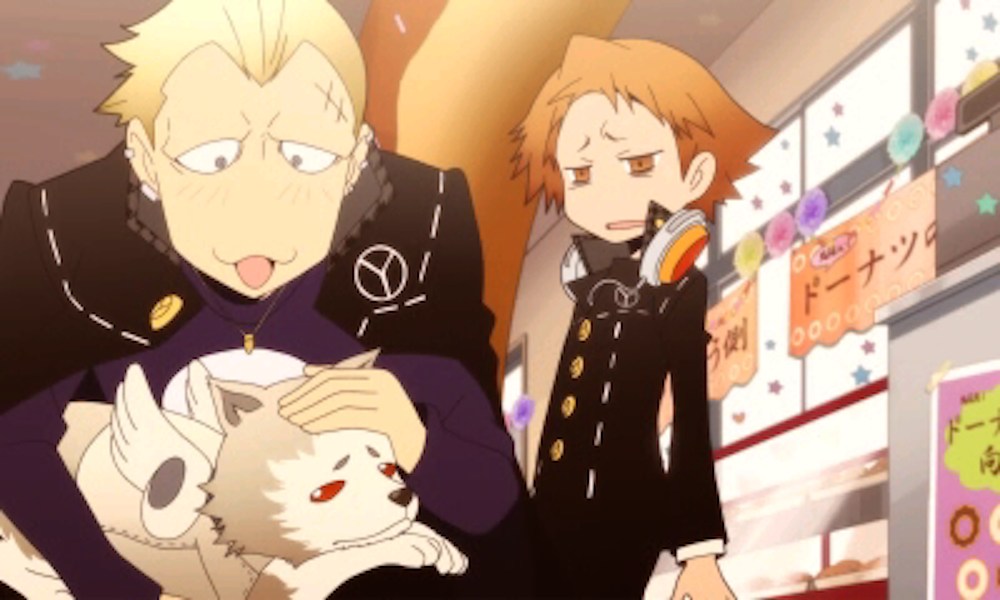 Above: Look forward to more exposition in Persona Q’s cutscenes.

No frame of reference? No worries

For JRPG fans who haven’t dabbled in either franchise but have always been curious, Persona Q isn’t the ideal entry point, but gamers won’t be completely lost if they go in cold. Imagine watching The Avengers movie without having seen any of the earlier Marvel films. You’re missing out on a lot of valuable background, but that doesn’t stop the movie from being enjoyable.

New players might miss some backstories and in-jokes, but the game’s thorough tutorial, abundance of mapping tools, and familiar turn-based battles should ease them in; given that Etrian game are notoriously difficult, players need all the help they can get, no matter their experience level. Those wanting to cram in a last-minute playthrough of an Etrian Odyssey installment or a Persona game to catch up are in luck, however — Shadow of the Labyrinth does not come out for the Nintendo 3DS until Nov. 25. 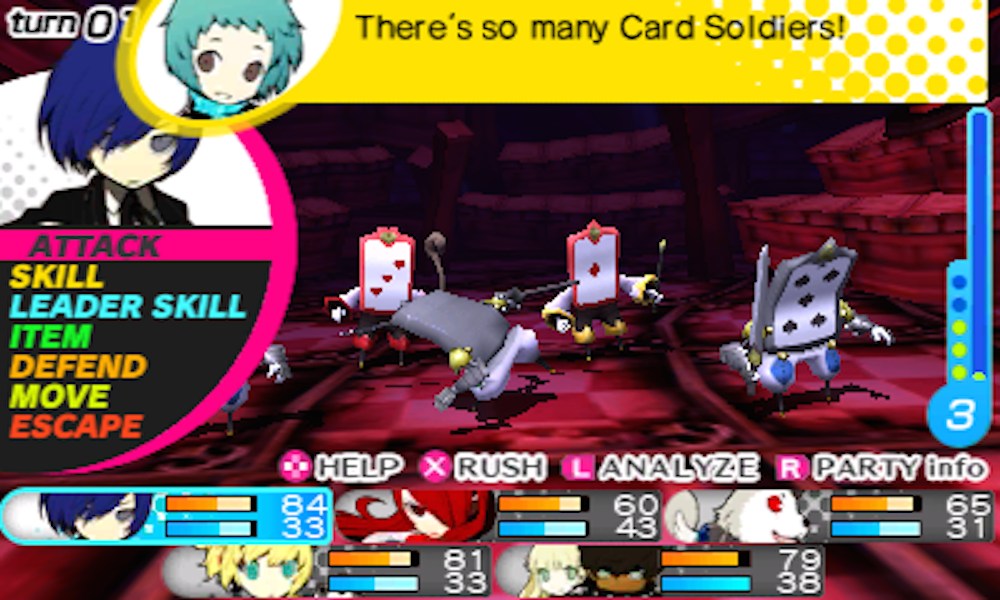 Above: The Alice In Wonderland-themed dungeon, down to the playing-card enemies.