Microsoft is potentially working on acquiring one of the biggest game developers in the world.

The publisher is in discussions to snatch up Minecraft developer Mojang for $2 billion, according to The Wall Street Journal. We are working to verify the story, but we cannot confirm the rumor at this time — although WSJ has a history of getting these things correct. The report claims that the deal could go through as early as this week. If Microsoft does seal the deal, it will own an indie-gaming phenomenon. Minecraft has players building Lego-like structures with simple-looking 3D blocks, and it has caught on with players of all ages.

Since debuting in 2011, Minecraft has sold more than 55 million copies on PC, smartphone, and consoles. It is especially popular with young kids, and industry observers often note that it is the Super Mario Bros. for the up-and-coming generation of gamers.

A big reason that Minecraft has caught on with young gamers is that the game is available on just about every major platform. It debuted on iOS and Android devices in 2012, and it’s also available on PlayStation 3, PlayStation 4, and soon — although maybe not anymore — PlayStation Vita in addition to Xbox 360 and Xbox One.

If the deal goes through, one question the company will have to answer immediately is what will happen to Minecraft on anything that isn’t a Microsoft platform. We’ve asked Microsoft and Mojang about the future of the game, but both companies have yet to comment. 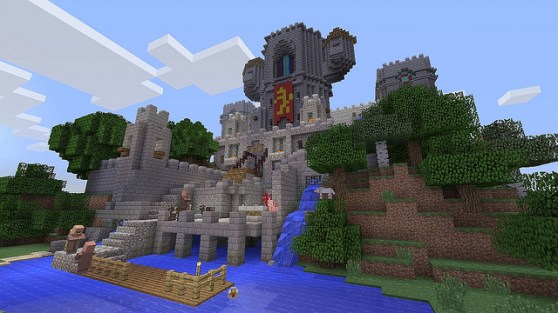 Above: Minecraft’s user-generated content is part of a new golden age of gaming.

The scope of Minecraft’s popularity is difficult to overstate. The physical edition for Xbox 360 was the ninth best-selling game of 2013 at U.S. retailers, despite coming out a year after the digital release on the same platform and two years after its PC launch. The disc versions for Xbox 360 and PS3 continue to place among the top-10 best-selling games every month.

But owning Mojang and Minecraft wouldn’t just give Microsoft a popular game. It is a merchandising behemoth with toys, Lego sets, and apparel available at stores like Target and Walmart. The Hollywood producers responsible for turning The Lego Movie into a blockbuster even announced plans for a Minecraft film.

For Microsoft, this acquisition could give it the boost it needs to compete with Sony in the new-gen console war. The PlayStation 4 has outsold Xbox One every month since they both debuted in November, and Microsoft has already tried several promotions, adjustments, and price cuts to catch up. Owning Minecraft could change everything.