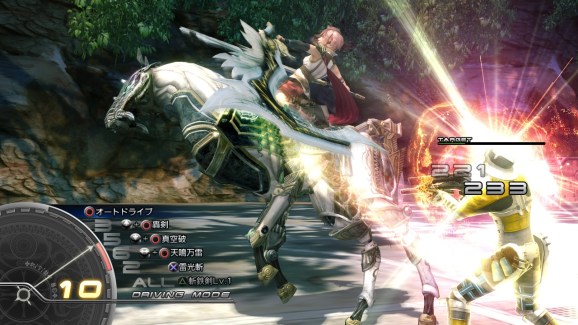 Square Enix is potentially opening up its entire gaming catalog to mobile gamers with its new streaming service Dive In, due for launch in Japan on Oct. 9.

The Dive In app will run on iOS and Android devices and will give players access to titles as diverse as role-playing game Final Fantasy XIII and recent stealth-action title Murdered: Soul Suspect.

While plenty of older Square Enix RPGs are available on mobile right now, file sizes and hardware limitations mean that we can’t have them all. Streaming titles directly to the Dive In mobile app gets around both these problems, potentially opening up the entire Square Enix back catalog.

Of course, streaming games raises the thorny issue of bandwidth. Square Enix says you need an effective bandwidth of 3Mbps or better to use the service (and ideally 6Mbps), which will restrict access to Wi-Fi or fast mobile connections. You’re going to want to watch your mobile data usage, too, unless you have an unrestricted allowance.

Above: The pricing structure for the Dive In rental service from Square Enix.

No word has come out yet about Dive In releasing outside Japan, but it would make sense for Square Enix to make the service as widely available as possible.