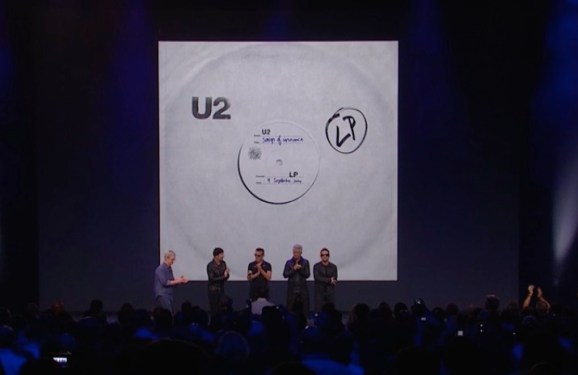 You may not have caught it, but the semi-rehearsed back-and-forth between Apple CEO Tim Cook and Bono on stage at yesterday’s iPhone event revealed that Apple paid dearly to make U2’s new album free to iTunes customers.

Exactly how much Apple spent to make the album free isn’t known, but it was likely a sizeable amount. The deal included making U2’s Songs of Innocence available as a free digital download to all iTunes customers across 119 markets across the globe. Apple also gets exclusive rights to play the song on Beats Music and iTunes Radio through October. So given that album and digital download sales are down across the board, the fact that U2 is one of the best paid bands in the world, and rumors that U2 will be doing lots of promotional work for Apple in the future, I’d estimate that Apple is spending millions — possibly up to $100 million, according to the New York Times.

That’s a generous offer, even if the U2 deal cost Apple just 10 percent of that figure. (Considering that $10 million is about the total price most popular artists could expect to make from a new album — if U2 sells about a million copies, or the equivalent of, at about $10 each.) Regardless of the exact number of millions Apple paid it would still be worth it for U2, as the band would get a huge marketing push from Apple it could parlay into a worldwide tour — aka where U2 makes most of its money.

And for Apple, the exclusive content’s hefty price tag might be a necessary cost to retain its status as the top seller of digital music. Apple’s main strategy right now is to shift the popularity of its iTunes store over to streaming services. Starting with a band like U2, one with global appeal and fans who would buy the album without listening to it first, is a great way for Apple to get more people interested — simply by baiting them into visiting iTunes to download the album. A compelling exclusive album (that perhaps isn’t free) every other month might even entice those fans to sign up for Beats Music, just to save money.

Exclusive deals are also likely to happen more often now that former Interscope Records producer and Beats founder Jimmy Iovine now works for Apple after the Cupertino-based company acquired Beats. Iovine, who has produced multiple albums, including two for U2, has enough sway in the music industry to forge deals like this, as Time points out. If Apple can brand iTunes Radio and Beats as the main place for exclusive music content, as well as new album launches, it’ll have an advantage over competitors.

But first this strategy has to work. And from an industry perspective, the paid streaming service revenue must also compensate for the loss of digital download sales. And that has yet to happen.