I never fall prey to microtransactions. I rarely spend money on tacked-on downloadable content that usually disappoints. Yet Golem Arcana, the new two-player tabletop-miniatures war game/mobile app hybrid from developer Harebrained Schemes (HBS), threatens to empty my wallet like nothing has before. It takes all the fun parts of physical miniatures war gaming — like varied armies and unit types, collectible expansions to add both size and depth to your ranks, and a plethora of scenarios and customization options — and adds video game technology to streamline the experience and remove most of the tediousness.

Think of it like the cyborg of tabletop war gaming. You still purchase and play a mostly physical game. You move figures representative of giant golems around a board (think mechs, only with a fantasy twist, using magic instead of guns) and attempt to defeat your opponent or complete objectives in a one-on-one battle. But Golem Arcana also gives you an integrated mobile app that opens up interesting new possibilities not available to a physical game alone. A convenient Base Game Set, which is available in stores and online now, gives you all you need to start playing with two players, though you may soon want to expand your armies beyond three figures per person.

This mobile app (available now for free in the iOS and Android app stores) almost completely removes what most people see as a barrier to entry in this genre by managing all of the numerous rules, such as how terrain affects your units and whether or not you have line of sight to hit your enemy with a ranged attack. It pulls this off with invisible microcodes printed on nearly everything (the figures themselves, the terrain tiles, and convenient control cards that come with each unit). A clever electronic stylus reads these with a small infrared camera and sends the signals to your Bluetooth 4 LE-enabled smartphone or tablet.

Once you pair the stylus with your compatible mobile device and fire up the app, inputting commands is a breeze. HBS smartly gives you more than one way to select units and abilities. You can either tap the stylus to the physical miniature itself or to the printed control card that is provided for each unit. Once you select an ability, you simply tap the intended target: terrain tiles for movement or another miniature for an attack. 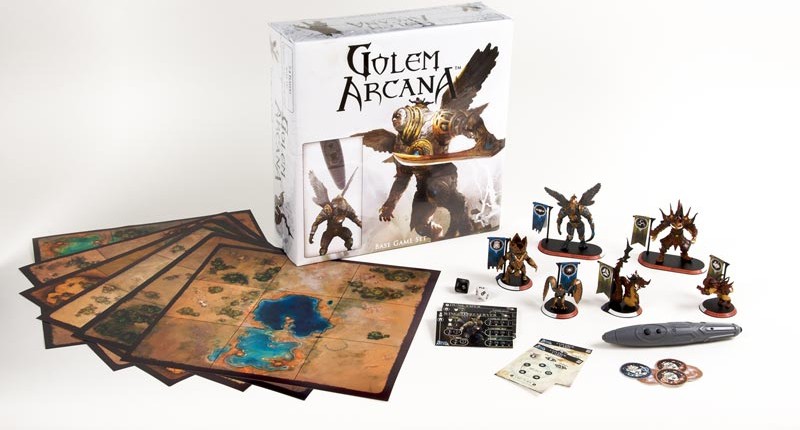 Above: This is what you get in the Base Game Set.

The app resolves movement instantly, and it also warns you if you attempt to move too far or in an invalid way. While the app gives you a visual representation, you still need to move the miniature across the physical board by hand to complete your turn. For combat abilities, it automatically applies all applicable modifiers (such as bonuses or penalties for certain types of terrain) and determines if the attack actually lands. Score a hit, and it calculates the damage done to the other unit. All of this happens behind the scenes with you just tapping the stylus twice.

It only took me about 15 minutes to really get into the habit of using the stylus to record the game actions. Afterward, it became almost natural, and I didn’t think it impeded the flow of the game at all.

The app does all the hard work for you

What’s the movement cost for elevated terrain? What the penalty to your chance to hit when your target is in deep water? What’s the ability point (AP) cost of the Devil Djinn’s Lava Lance ability?

Fortunately for you, the app remembers all of this. You need never look up a value or make any calculations. It will even roll virtual dice for you (assuming you’re not too old-school to give up the physical ones). It will tell you if your attack landed and how much damage it did. The location and remaining health of each unit is always readily available. And don’t even think about cheating; the app won’t let you. 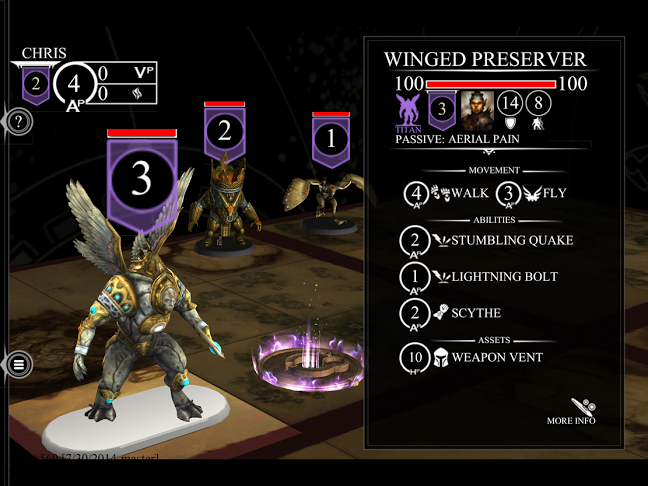 Above: A Winged Preserver is about to receive a command inside the Golem Arcana app.

The net result of this is one of the easiest experiences I’ve ever had getting into a new game. It basically leaves players only worrying about the things that really matter: planning your strategy and the thrill of smashing your opponent. Once you play through a few scenarios, you’ll wish your other tabletop-miniatures war games had the same technology. It makes you wonder if Harebrained Schemes would be better off keeping it to themselves and cornering the market or licensing the crap out of it to every other manufacturer.

If that weren’t enough, the app brings an entire new dimension to tabletop war games that was previously not possible: Since the app controls everything, scenarios can have surprises programmed into them that are invisible to both players until one moves a unit onto the appropriate square. Examples include being offered a quest with a specific objective and reward or even encountering a computer-controlled character who speaks to you or gives you information via the app. It adds a level of unpredictability that wouldn’t be present in a game set up entirely by humans.

I unboxed the Golem Arcana and tried to set up the stylus per the instructions. I paired it to my iPad via Bluetooth and battled with it for nearly 20 minutes until I saw the note on the website about how it used an infrared camera to read the codes. Then it finally dawned on me that I should remove the rubber tip that was covering the camera aperture on one end of the stylus. I can’t help but think this step should’ve been included in the instructions.

The other frustrating experience I had came when I tried to play the tutorial for the first time. The scenario had progressed to the point where both armies had moved and were starting to engage each other in combat. I decided I wanted to better understand one of the rules better, so I clicked on one of the links in the in-game help system. It opened up the website in the web browser on my tablet, which I quickly read. When I clicked back to the Golem Arcana app, I discovered, much to my dismay, that it had reset itself, and I had lost all the progress in the game I was playing, forcing a restart.

Finally, the stylus seemed to lose its connection with the tablet at random times. While it’s not that big of a deal to reconnect it, it’s not something you really want to keep doing in the middle of a tense game.

While taking care of small figures should not be a foreign concept to anyone who has played a tabletop war game before, removing Golem Arcana’s armies from the packaging was a harrowing experience for me. They are so tightly wedged into the plastic insert, and several of them flexed and bent a disturbing amount when I tried to take them out. In addition, my poor Devil Djinn seems to have lost the lower part of the jaw on his left hand, and I never did discover were it went. 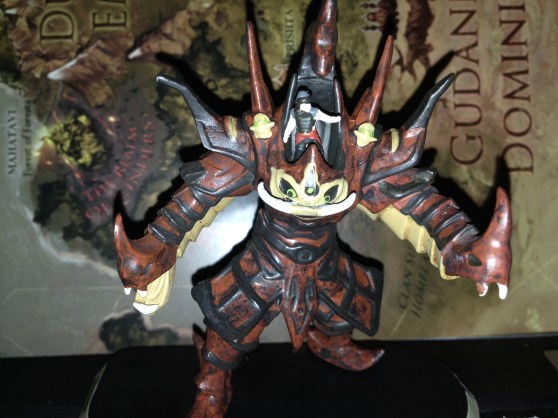 Above: His damaged left hand makes me a little sad.

Golem Arcana bills itself as a “digitally enhanced miniatures war game,” and it certainly excels at what it sets out to do. Harebrained Schemes has managed to truly enhance the tabletop war-gaming experience and turn it into something that both newcomers to the genre and grizzled veterans can enjoy. Once I got used to the interface and the app, which didn’t take very long, I was pleasantly surprised with how well it worked without interrupting the flow of the game. Having an app manage and enforce all the rules seems like a genius move, and it almost makes you wonder why someone hasn’t tried it before now.

The expansions (additional units and map tile sets) and other in-app customization options (knights, the people who control the golems, who add their own special abilities; and relics, magical items that grant additional powers; and additional scenarios) give it a massive amount of variety and replay value, and I’m already looking at expanding my collection.

The Golem Arcana app is available now for free on iOS and Android. (See here for a list of supported devices). The Golem Arcana Base Game and expansions are also available now and can be found at online retailers such as Amazon and in local gaming stores.The publisher gave GamesBeat a retail copy of the Base Game Set for the purposes of this review.