One of the best virtual keyboards for Android is finally making its way to iOS.

SwiftKey today showed off its long-awaited iOS 8 keyboard, which will bring with it all of the features that made it a hit on Android: predictive text (which lets you choose words you commonly type as you’re typing them), intelligent autocorrect, and cloud synchronization, so you can bring your typing preferences to multiple devices. 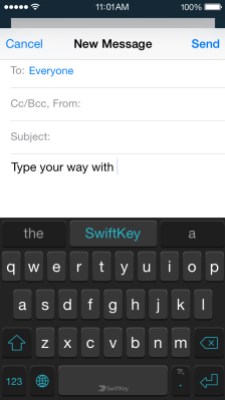 With iOS 8, Apple is finally opening up to third-party keyboards, something Android has supported for years. So if you’ve hated Apple’s virtual keyboard (and I know there are plenty of you out there), you’ll soon have a wide variety of alternatives. For example, at WWDC earlier this year, Apple showed off SwiftKey competitor Swype, whose virtual keyboard allows you to swipe your fingers across letters, instead of just hunting and pecking.

SwiftKey’s iOS 8 app should be available by the time iOS 8 launches on September 17, and it will also support the iPod Touch and iPad in addition to the iPhone. The new app follows a major shift away from charging for its Android app back in July — now SwiftKey’s Android app is free (and buoyed by in-app purchases). The London- and San Francisco-based company has raised more than $21 million from investors including Index Ventures and Accel Partners.

To show it’s pulling out all the stops for this release, SwiftKey also commissioned British actor, comedian, and vocal Apple fan Stephen Fry for its first iOS 8 commercial. For a company whose popularity mainly came from word of mouth, the commercial shows that it’s ready to mature into something much more than just a virtual keyboard.