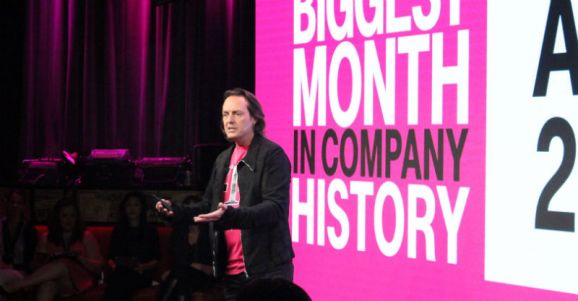 SAN FRANCISCO — The upstart mobile carrier that refuses to be bought, T-Mobile announced that soon all its phones will be able to seamlessly hand off calls from its LTE network to available Wi-Fi networks.

Apple announced that its two new phones, the iPhone 6 and the iPhone 6 Plus, will support that hand-off. T-Mobile says it’s the only U.S. wireless carrier Apple has been working with on the technology.

“We seamlessly take a VoLTE [Voice over LTE] call and hand it over to a Wi-Fi environment,” said T-Mobile CTO Neville Ray. “There is ubiquitous Wi-Fi, but there are still lots of places where you can’t get cellular [connectivity],” Ray said.

This means that if you’re on a VoLTE call in the house and get in your car, your voice service will switch over to cellular VoLTE when you’re out of reach of the Wi-Fi network, Ray explains. And vice versa.

T-Mobile CEO John Legere says every smartphone T-Mobile sells will have the capability turned on out of the box.

Legere says 57 percent of wireless users state they have a wireless “dead zone someplace in their house.” This service will prevent dropped calls as users roam … from room to room.

He says T-Mobile will have an “open enrollment” where customers can change out their existing phone for one that allows a Wi-F- to-cellular hand-off.

The carrier also announced a new Wi-Fi home router, the “Personal Cell Spot” that will carry calls that come within range of cellular connections.

And that wasn’t all. T-Mobile announced a new agreement with the in-flight Wi-Fi service company Gogo to let T-Mobile customers text for free on the plane. (The user will have had to complete at least one Wi-Fi call on their phone in addition to other requirements).

T-Mobile says it added 2.75 million new gross new subscribers in the month of August. A million of those were post-paid adds.

“The month of August was the biggest post-paid adds month in the history of this company,” Legere said.

And of course, Legere had some time to dish some dirt at his Big Telco competitors.

He called AT&T’s Amazon Fire phone the “fire sale phone.” As we know, AT&T recently announced that the Fire phone will be free with a two-year contract.

Legere says T-Mobile will be bigger than Sprint by the end of the year. “Put a fork in it,” he said of Sprint’s business.

“I want to thank the Three Stooges for helping us delivering the best month ever in August,” Legere said of AT&T, Verizon, and Sprint.