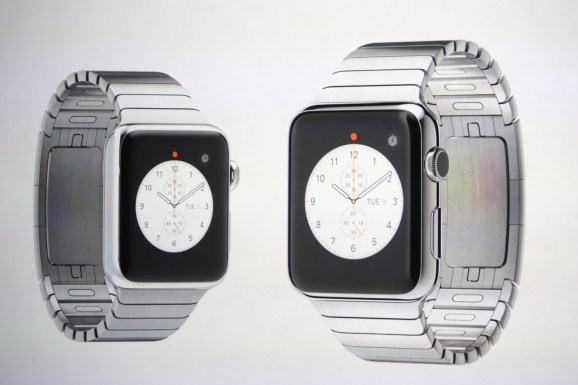 The new Apple Watch has a pleasing (if conventional) hardware design and some clever software, but many observers are already looking forward to the second generation of the device — only one day after the first version debuted.

One could argue Apple wasn’t ready, or the technology wasn’t ready, for a major disruption of the smartwatch space, such as it is.

The limitations of Apple’s smartwatch sound familiar: immature app selection, no cellular or GPS radios, dependence on the phone, hard-to-navigate interface, etc. These are the same criticisms leveled at other smartwatch makers, like Samsung and Motorola. The Watch may look to some like a somewhat pretty also-ran.

The analysts I talked to about the Watch Wednesday were less than fully enthusiastic.

“I have mixed feelings about it,” Technalysis Research analyst Bob O’Donnell told VentureBeat. “Yes, it is a nice watch, but it has the same problems that the rest of the category faces: That is, it doesn’t do a lot of things that the phone doesn’t do already.”

“So you might have the nicest device in a category nobody cares about,” O’Donnell says.

Did Apple jump into the smartphone space too early? Apple’s M.O. in the past has been to wait until consumers have become aware of a particular kind of widget (MP3 player, smartphone, tablet), then release a widget that’s prettier, better designed, and more functional than anything else on the market. This doesn’t seem to be the case with this release.

One of the main things the Apple Watch seems to lack is a clear use case.

“The good thing about Apple is that they always explain exactly why you need its product, then they explain how the product fills that need, but they didn’t do that for the Watch,” says Current Analysis analyst Avi Greengart.

But in the meantime, it might be up to the developers to build apps that answer that question, Greengart suggests.

Additionally, by the second version, Apple may have gotten past some of the technical limitations — like the lack of smaller, more powerful batteries and more power-efficient screens — just as it has done with successive versions of the iPhone.

It’s a good bet that Apple will create thinner and more powerful watch on the second time out. But it also needs people to buy the first version when it comes out next year.

And, as Technalysis’ O’Donnell points out, some people won’t want to upgrade their existing wristwatch in the same way they upgrade their phones. “There is no generation one in a piece of jewelry; a watch is something you buy once and keep for a long time,” he says.

This may be true, especially when some of the blingier versions of the Watch might cost as much as $2,000.

IDC analyst Danielle Levitas also believes waiting for version two of the watch is a good idea for many people.

Levitas believes the second generation of Watches could come out in as little as twelve months, and that it’s likely that watch will be thinner and will do more things.

No need to take over the world

Still, there are good reasons to believe that Apple doesn’t need a full-scale Steve Jobs-style category assault to be successful with the smartwatch. The numbers suggest that demand is large enough to make the new watch a success in the first year.

According to IDC, 265 million devices worldwide (including iPhone 5 and iPhone 6 models) will be compatible with Apple Watch by the time the new device launches next year. And 42 million “intelligent wearable devices” will be sold world wide next year. So even if 10 million of those devices were Apple Watches, that would be a very positive first year sales number for Apple.

And, Levitas points out, Apple has a lot of loyal and affluent customers who are likely to buy the first generation iPhone.

Looking at it another way, Apple isn’t really trying to dominate an emerging space as it has with earlier devices. It may be just trying to get a foothold in a very old space –wristwatches. There’s evidence to support this.

Movado watches, for example range in price from $300 up to $4,000. “In terms of those other products its definitely affordable,” Rubin says.

Apple said its basic watch will cost $350, but there’s a wide range of models and bands, and the range could go as high as $2,000 for the gold-plated, delivered-in-a-jewelry-box version.

“They are preserving more aspects of the traditional watch in the Apple Watch than they did (with the) traditional phone experience in the first iPhone,” Rubin says.

Technalysis’ O’Donnell agrees. He points out that there was a lot of speculation before the launch about whether the Apple device would look like a watch at all. But the new device fits squarely (no pun) within the wristwatch paradigm, he says.

“The screen is square, and they even measure the size of the screen in millimeters like they do in the watch industry,” O’Donnell says.

Bottom line: The analysts agreed that the Watch still faces some very difficult design challenges, and that for many people it might be better to wait for the second generation of the device to invest.