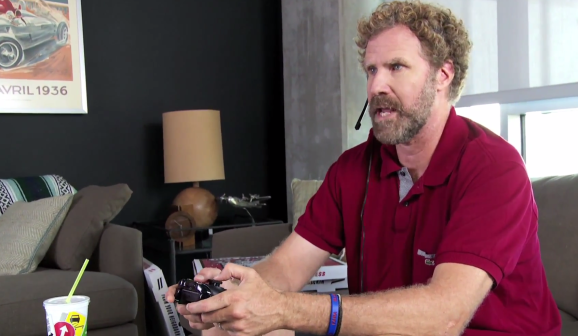 Will Ferrell wants to play games on Twitch, but he won't do it unless you donate to charity for once.

The philanthropic spirit of gamers is starting to get a reputation, and that has one of the biggest comedians in the world laying down a challenge.

Actor Will Ferrell, who starred in films like Anchorman and Elf, is asking the gaming community to help him raise at least $375,000 as part of an IndieGogo crowdfunding campaign to benefit non-profit organizations Cancer for College and DonateGames. If the project reaches its goal, Ferrell promises to spend Oct. 26 playing video games on Twitch. The event will feature special items for people who donate, like a tube of “Will Ferrell’s SuperMegaUVBlastMax: Gamer’s Sunscreen.” And everyone who contributes is entered into a sweepstakes to travel to San Francisco and take on Ferrell in a battle of gaming skill. You can get all of the details at WillFerrellHatesCancer.org.

“It’s no secret the best gamers in the world have wanted a piece of me for years,” Ferrell said in a statement. “Guys like CaptainSparklez are gunning for me. I think he might be an actual wizard and he’s looking for blood. I told them I’d give them the honor of competing against me with one small condition: we raise a whole bunch of money for a great cause like helping kids with cancer.”

While Ferrell is the face of the event, Cancer for College and DonateGames handled actually putting it all together. Cancer for College is an organization that tries to put pediatric-cancer patients and survivors through higher education by paying for their tuition.

“We’re so excited to be part of this awesome campaign,” Cancer for College founder Craig Pollard said. “This campaign is a fun way for people in the gaming community to participate in our mission of providing hope by raising more funds to give cancer survivors scholarships.”

DonateGames, meanwhile, is a group that accepts old games and consoles and tries to turn them into cash they can use to pay for the healthcare costs of families dealing with pediatric cancer. 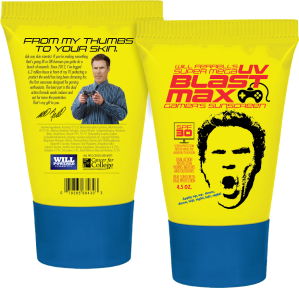 Above: If you donate $50 to the IndieGoGo campaign, you’ll get your own tube of Will Ferrell’s SuperMegaUVBlastMax Sunscreen.

“The last thing families in hospital cancer wards should worry about is the financial cost of their child battling for their life,” DonateGames founder Jim Carol said. “We are continually humbled by the goodness of the gaming community and ecstatic about the opportunity to raise funds in support of pediatric cancer.”

DonateGames and Cancer for College don’t just have Will Ferrell in their corner. The organizations partnered with Amazon, Microsoft, and Twitch for this event. Amazon donated $5 gift cards that are good for anything in its store; Microsoft provided Xbox 360 controllers that Ferrell will sign personally; and Twitch threw in some Turbo accounts that enable you to get extra features on its site. All of this stuff will go to people who donate — naturally, the more you give, the more you’ll get.

“Gamers and charity go hand in hand,” Twitch partnership development director John Howell said. “Over the past three years, the Twitch community has raised more than $10 million for various charitable causes. Having Will Ferrell join us, Cancer for College, and DonateGames in the fight against cancer takes philanthropy and gaming to a new level.”