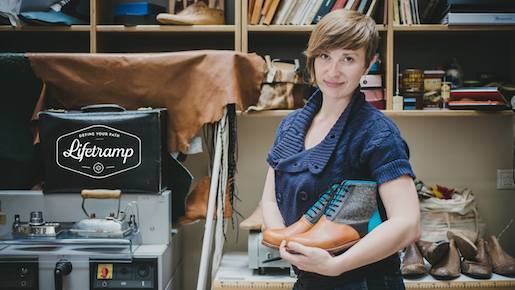 Want to be a shoemaker? Lifetramp lets you try out a new job for a day.

When I met Lifetramp co-founder Mariusz Ciesla, he told me that over 60 percent of American adults are unhappy with their jobs. This statistic, together with the idea that people would be interested in discovering other types of work, led the team to create Lifetramp.

Originating from Poland, Lifetramp can be described as the Couchsurfing for jobs. It is a platform that connects mentors with people who are curious to see how a day in the life of certain career looks like.

“It started off as an experiment,” says Ciesla. The team began by inviting anyone to come to its office to shadow them for one day. Ciesla told me that it worked “surprisingly well” and led them to create a landing page where the team had thousands of people signing up from all over the world. It was at this moment that Lifetramp thought it might have discovered a viable business.

The team itself is spread out across various locations from Poland to Berlin. Having bootstrapped until now, Lifetramp is now looking for an investor to climb on board.

I sat down with Ciesla to find out what Lifetramp is still missing and the startup’s plans for the future.

VentureVillage: Who are the typical users who sign up for Lifetramp to discover new careers?

Ciesla: We have multiple “typical” use cases. A lot of them are kids that are either pre-university or have just finished university and don’t know how to continue. That is one market. The other one are people who have done a job for a while but who want to try different things. It is good way to try a new career.

We are open for any kind of job. The most common are craftsmen, because a lot of our users come from corporate backgrounds, and these people sit behind desks all day. They want to do something with their hands. And baristas. Baristas and coffee roastery owners are also very popular.

VentureVillage: What is the incentive for a mentor to use the site?

Ciesla: Right now, it is just to promote yourself and your brand. But later it will go the crowdfunding route. For example, it is a great way for an artist to raise money for her studio. We have learned that people are very happy to invest in other people and it’s even more so after the experience happened. Right now the only thing you get is a lunch. But enabling mentors to raise money is a goal for us later down the road.

VentureVillage: Where do you want to expand to next?

Ciesla: Up until now, we’ve been expanding organically through a network of ambassadors. We have ambassadors in all kinds of places. For example, Spain, Mexico and Estonia are growing really fast right now. We have a few popular markets, but we are now trying to take a more organized route and expand city by city and country by country. Germany is on our list, but that is going slightly slower since Germans tend to be more skeptical.

VentureVillage: How has the word on Lifetramp gotten out thus far?

Ciesla: Word of mouth, mostly. We launched with a zero marketing budget. We talked to our friends and shared what we were doing. Then we were contacted by Fast Company, and they wanted to feature us. We were also on a few TV and radio stations in Poland. Afterwards, we decided to find ambassadors or people who are in charge of growing the community in their cities.

VentureVillage: What are you still missing?

Ciesla: We are still in the process of figuring out how we will achieve the “hockey stick growth” of Lifetramp. It is growing really fast organically, but we want to take it to the next level. Since we’re looking to grow in Germany, we are missing ambassadors here.

VentureVillage: Do you have any competitors?

Ciesla: Directly, not really. Most of the competitors in this space are clubs, where you can pay a set amount a month to join and you can visit other members. The difference is that we don’t want to close Lifetramp off to anyone. We won’t want to build a money wall in front of people. We want people to play around with it and find what they enjoy doing.

VentureVillage: What has been your greatest learning so far?

Ciesla: Building something is the easy part and reaching people and growing is the hard part. I am a builder type of person, so I find it easy to build things, but there is so much that needs to come later. We can see people want it, but since it’s a marketplace, growing supply and demand is really important and there’s a lot we need to learn in this area.