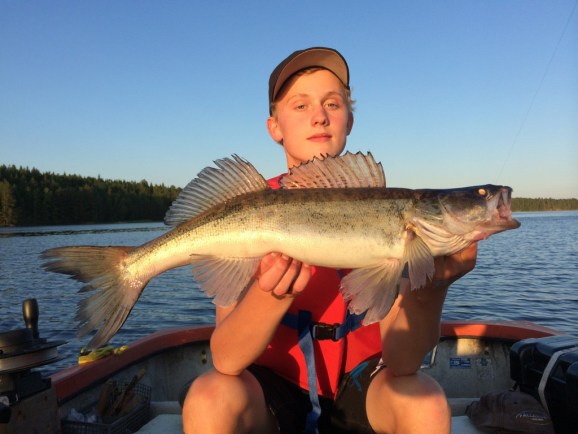 Fishing brings joy into people's lives, and it's a huge business too.

A bad day fishing beats a good day at the office, as the saying goes.

And quite a lot of people go fishing for fun. According to the American Sportfishing Association (.pdf), almost 60 million U.S. anglers generated $48 billion in retail sales in 2011, supporting more than 800,000 jobs.

Still, it struck me — and several other tech-industry reporters — as a little odd when FishingBooker.com, a site that helps people book charter boats for fishing trips, won the “Audience Choice” award at Disrupt, a tech-industry conference here in San Francisco.

“Who says the Valley is out of ideas?” tweeted Wall Street Journal writer Christopher Mims.

That prompted venture capitalist Marc Andreessen to weigh in a little later, pointing out our folly in being so snarky.

That prompted a very civil and enlightening discussion (and one snarky flowchart), during which I learned a lot about the size of the fishing market overall. (Thanks to Mat Honan for posting the link to the ASA brochure above).

I’m still not convinced that the market for chartered fishing boats (as opposed to the overall fishing market) is big enough to make FishingBooker.com all that interesting a business. Nor do I see anything in the site that suggests it has a unique technological advantage underlying its marketplace or that the fishing industry is ripe for disruption.

However, Andreessen did make a convincing case about how much fishing means to many people and how many businesses it can support. Hailing from rural Wisconsin, he pointed out that there — and in many other parts of the country — fishing is a very big deal.

“There are a lot of people for whom fishing trips are their main opportunity in their lives to relax and enjoy themselves,” he told me.

I can relate to that: I am not an especially adept fisherman, I have terrible luck, and I don’t often do it — but I have enjoyed every single day I’ve spent fishing.

Now, Andreessen did say he wasn’t sure whether FishingBooker.com was a company worth investing in. But Andreessen’s point is a good one: Even though many of us in Silicon Valley might think it sounds silly, a fishing marketplace is trying to tap into a very large market indeed, and that means it could turn into a good business.

“I don’t know if this company will win the space. But the winner here will probably be very large,” he tweeted.

And that brings me to a key point about the difference in the point of view between entrepreneurs and investors on the one hand and tech journalists on the other.

Entrepreneurs and investors are generally interested in markets they can capture. Sometimes that capture takes the form of a technological edge — some kind of innovation that gives the company an “unfair advantage.” Sometimes it comes from being the first to a market or the first to provide a workable solution, which produces network effects that make it hard for competitors to catch up. Sometimes it just comes down to execution: doing things better than the competition and continuing to do so for long enough that your market lead becomes unstoppable.

Tech journalists, like me, are looking for interesting tech stories to tell. Also, by nature, we tend to be very skeptical — and that very snarkiness, while sometimes annoying, is a useful tool for deflating hype and getting at the truth behind the stories companies tell the public (or tell themselves).

At VentureBeat, we are always looking to understand and explain technology, to figure out how a product or a company can create a technological advantage that provides a personal, professional, or marketplace advantage.

So a company that takes a known business model (a marketplace connecting sellers and buyers, like Airbnb or Uber) and applies the same playbook to a new field (like fishing charters) is not especially interesting to us, unless that company has some unique application of technology behind it.

But for Andreessen, who is looking at companies as investment opportunities, the criteria are different. “I’m looking at the impact on people’s lives and happiness,” he tweeted.

So in retrospect, it does make sense that the audience at an event designed to celebrate entrepreneurs and startups would like FishingBooker.com. But it could, have a big impact on people’s lives and happiness. And I wish its founders the very best.

I’m still looking for the tech story behind it, though — and until I find it, you won’t hear much about FishingBooker.com on VentureBeat.

In the meantime, let’s go fishing. I think that’s something we can all agree is awesome.