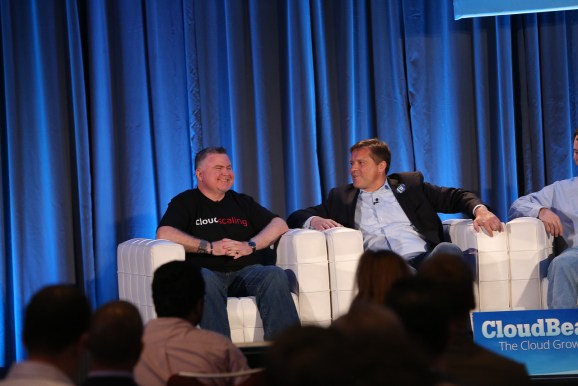 It’s a fascinating move for HP, which in recent years has standardized around the OpenStack open-source cloud software for its public cloud, as well as other offerings in its Helion cloud portfolio. Eucalyptus, meanwhile, cultivated a reputation as a provider of cloud software for companies’ on-premises data centers that could align with the application programming interfaces (APIs) of Amazon Web Services (AWS), the market-leading public cloud and a direct HP public cloud competitor.

But HP has watched big businesses express serious interest in both OpenStack and AWS, Bill Hilf, senior vice president of product and service management at HP Cloud, said in an interview with VentureBeat.

“We want to be able to go to those customers and say, ‘When you go with HP Helion, we give you that level of choice,'” Hilf told VentureBeat. “We’re not going to try to have you bet just on our public cloud.”

In essence, then, HP has come to understand it would be wise to be a sort of arms dealer for cloud services, whether they be in HP’s cloud or in AWS. Other companies, like IBM, have realized that it pays to be an enabler of multi-cloud usage — especially with Amazon. HP gets that.

Hilf didn’t have much detail about how the OpenStack products will be integrated with those of Eucalyptus.

“There’s going to be a lot of strategic discussion we have to have about that — how and what makes the most sense over time,” he said.

The acquisition partly explains Mickos’ sudden, and at the time surprising, embrace of OpenStack last month. Indeed, maybe there is value in OpenStack. As Mickos put it in a blog post, “OpenStack, in my view, is the all-embracing cloud project that various large and small vendors package for complex and highly customized deployments.”

Eucalyptus started in 2007 and is based in Goleta, Calif., with fewer than 100 employees. The startup’s office will stay there, Hilf said.

Investors include Benchmark Capital, BV Capital, Institutional Venture Partners, and New Enterprise Associates. As of April 2012, when Eucalyptus announced a $30 million round, the startup had raised $55.5 million.