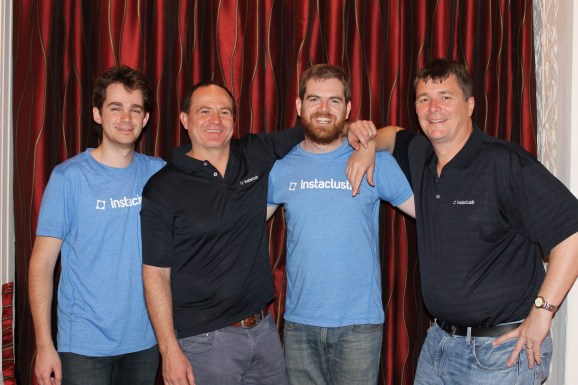 Once upon a time, Ben Bromhead and Adam Zegelin wanted to build a marketplace for sharing data sets on the Internet, but they had to work hard and build tools to manage the databases that held all the precious data.

They even cooked up a user interface to see how everything was working in the database, which derived from an open-source NoSQL database known as Apache Cassandra. It all ran on the popular Amazon Web Services public cloud.

“It kind of got to a point where we thought, ‘Maybe somebody else would be interested in this,'” Bromhead said in an interview with VentureBeat.

Work on the system led to the creation in February 2013 of a startup called Instaclustr to sell the software, which falls under the database-as-a-service category. Today, after racking up about 20 paying customers, the startup is announcing a seed round to the tune of $2 million.

The startup’s progress and funding aren’t surprising: The Cassandra open-source community has been growing larger and larger. And DataStax, a startup that created a commercial distribution of Cassandra featuring stronger security and search functions, just raised a hefty $106 million round.

Moreover, startups that offer versions of databases running in clouds have gained traction as of late. Consider the rise of Redis Labs, which runs souped-up versions of the Redis and Memcached open-source databases on the public clouds from Amazon, Google, Microsoft, and IBM.

For Cassandra, though, Instaclustr has been the only database-as-a-service provider. Small wonder then that DataStax itself participated in the round. A startup with solid service in that area could increase long-term usage of the database. And when that happens, companies could decide to sign up as paying DataStax customers.

Indeed, Instaclustr now supports not only open-source Cassandra but also DataStax Enterprise. Prospective customers can choose to set up a single node, to get a taste of Cassandra and compare it with more traditional databases running the SQL query language, or they can boot it up across three or more nodes. The latter option replicates data across them all and ensures availability, even if the data center supporting one of the nodes runs into trouble.

For the moment, the service only runs on the Amazon cloud, but plans call for Instaclustr to start running on other clouds, such as Google’s, chief executive Doug Stuart told VentureBeat.

The startup doesn’t see any direct competitors. Stuart knows that could change, as the Cassandra user community keeps growing. But for now, he and the rest of the team can enjoy the perks of being the first mover in the market.

“You can guarantee that there will be [competitors] at some point,” he said. “We’re prepared for that.”

The startup has grown out of an office in the Australian city of Canberra and recently opened an office in San Mateo, Calif. While 10 people work for Instaclustr now, the headcount will double by the beginning of 2015, Stuart said. Customers include Dailybreak Media and Vero.

Along with DataStax, ANU Connect Ventures also joined in the round.