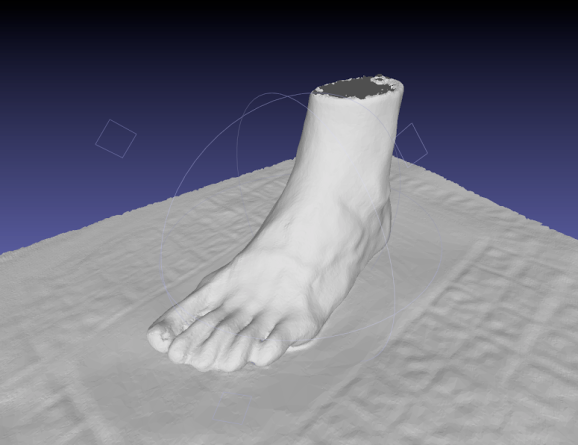 A 3D foot model by Volumental

If a Swedish startup called Volumental has its way, custom-made clothing will become the standard way of dressing. And they’ve just nabbed $3 million in seed funding to spark that new normal.

“Our vision is to make tailored products the norm rather than a luxury,” CEO and co-founder Caroline Walerud told VentureBeat. The funding came from Stockholm-based MOOR Capital, the investment arm of Kaj Hed, majority owner of Angry Birds-maker Rovio, as well as from Silicon Valley-based Founder.org.

To accomplish that long-sought mass customization, the company — a 2012 spinoff of Stockholm’s Royal Institute of Technology — is employing consumer-level 3-D cameras to first conquer shoes.

As demonstrated Wednesday at the Intel Developer Forum in San Francisco (at about 45:30 in this video), a user places a laptop with a 3-D camera on the floor.

Volumental has initially designed its system for Intel’s RealSense 3D camera — which will be coming out early next year and will be available either as a standalone through a USB connection or integrated into hybrid laptop/tablets or handheld mobile devices. However, Volumental will eventually work with other 3-D setups.

Then the user, barefoot or in socks, turns in front of the camera as the Volumental software captures detailed depth data during a 10- to 15-second scan. The resulting 3-D model not only provides a shoe size but also a shoe size for a specific brand of shoe — since, as shoe aficionados know, sizes can differ across shoe lines.

“The accuracy is within two millimeters of the actual dimensions,” Walerud told us, including length, width, and girth.

Currently, the software is integrated with data from GoPlae, a maker of shoes for children, but the company is working towards integration with other manufacturers.

The software will be cloud-based and available for free to consumers. An API connecting Volumental to shoe sellers online will enable the company to take a fee from sales.

Additionally, shoe stores will be targeted to buy such systems, to provide better fitting shoes. A sizing function to fit the shape of your foot to the inside of factory- or even custom-made shoes is also being planned.

But shoes are only “the first step,” Walerud noted dryly. “We want to do this for the whole body.”

Eyeglasses, custom shirts, suits, medically required products like shoe insoles — any wearable that could benefit from a precise fitting.

While the company will leave the manufacturing to others, it wants to be the “platform where you get customized things to fit your body.”

Walerud said there isn’t much direct competition in this space. She pointed to New York City-based Sols, which is focusing on insoles. A New Zealand-based footwear firm, the Kickstarter-funded Three Over Seven, also offers 3-D-measured custom shoes. Others are also experimenting with this process.

“We’re the only ones that make it really easy to make a 3-D model of your body” using consumer devices, she said.