At the IFA conference in Berlin last Friday, Samsung CEO Yoon Boo-Keun delivered a keynote extolling the virtues of a home filled with devices that connect to the Internet.

Samsung’s vision would  allow users to tweak and surveil every aspect of their home while they’re away: “The home of the future is not about the technology and not about being smart and connected,” he said. “It’s about it working in a way that you don’t notice the technology and giving you the right options at the right time. It’s about adapting to you.”

In spite of the connectivity and automation features native to the smart home, Yoon’s message puts the technologies supporting these efforts in the back seat. On some level Yoon is right. The sheer number of technologies and players in the smart home space are mind-boggling right now. Samsung, Google, GE, Revolv, ADT Home Security, iControl, Insteon and others have taken bets on radio protocols like Zigby, Zwave, WiFi, BlueTooth LE, etc.

The list of various devices and connections goes on and on at a pace that would make many consumers’ (and indeed some analysts’) heads spin. The smart home is an emerging market that’s incredibly important to all of these manufacturers, and yet they haven’t clamped down on the one aspect that’s most important to consumers — getting past the complexity.

That said, Yoon’s statements about pushing the technologies aside, while bold, seem to conflict with the nascent and somewhat nebulous smarthome movement, which Apple plans to bring to the mainstream with iOS 8 and its HomeKit platform. For businesses that want to play in the smart home space it’s all about the technology. And as Samsung projects 45 million smart homes in the near future, it’s becoming clear that the connected home devices are the next big thing for top gadget companies. Despite his words above, Yoon’s Samsung understands the need for direct access to the leading smart home technologies. 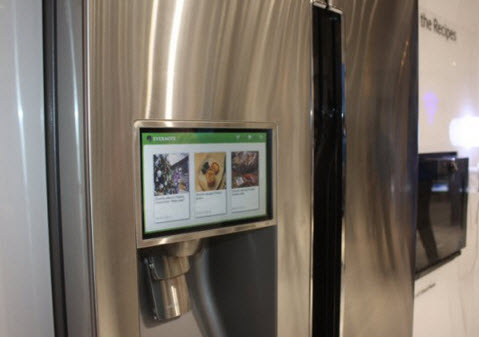 Understand that Samsung has already been a leader in connected appliances (e.g. Wi-Fi-enabled refrigerators, washers, etc.), and other devices for quite some time now. In order to keep an edge on the competition, the Korean conglomerate recently acquired startup SmartThings for a reported $200m.

Unlike the connected appliance market, SmartThings’ technology uses a hub-and-spoke model that allows users to quickly and easily coordinate the use of various connected devices. The SmartThings hub is a device that makes use of multiple radios and communications protocols to facilitate this device control. With the hub properly installed, users can easily monitor their connected devices or set these devices to automatically perform certain tasks turning a “connected home” into a “smart home.”

The SmartThings purchase positions Samsung alongside Google and others in competition for the emerging smart home market. Where the re-invention of mobile defined the technnology industry’s growth last decade, it seems that during the next few years, tech sector growth will come from the rise of home automation and wearable technologies.

It’s an age that some are inelegantly referring to as “the Internet of things.”

These markets are of the utmost importance for Samsung, a conglomerate that saw its desktop sales slump last year and, like many device makers, is struggling to maintain high levels of profitability in the mobile space.

Again, Samsung is not alone in looking to the smart home for growth. Google has similarly taken losses in the mobile handset space. Recall that Google purchased Motorola Mobility in 2011 for more than $12 billion, in a move that many believed would allow it to create devices in which it could control design, hardware, and software. Google surprised analysts when just three years later, in 2014, it sold Motorola off to Lenovo for less than $3 billion.

Despite the fact that Google held onto Motorola’s considerably valuable patent portfolio, few viewed the investment as profitable. Google then pivoted to the smart home space by purchasing Nest Labs, a leader in computerized home devices such as the Internet-connected learning thermostat and the intelligent smoke/carbon monoxide detector Nest Protect.

Likewise, venerable American conglomerate General Electric has moved into the smart home with its recent $30 investment in Quirky. Quirky is an innovative crowdsourcing startup that, like SmartThings, has recently debuted a connected home hub device in addition to making use of GE’s patent portfolio. With GE by its side, Quirky produced a well-received connected air conditioner and a learning egg tray that can tell users which the eggs in the refrigerator are the freshest. Even as GE is in talks to sell its appliance business to Elextrolux, Quirky’s technology is in part responsible for the $2 billion to $2.5 billion dollar valuation of the business.

Despite the recent consolidations in the smart home market, the space remains relatively diverse. Quirky’s partnership with GE was not an acquisition, leaving the New York-based gadget startup independent.

Boulder, CO’s smart home start-up, Revolv, garnered considerable attention at the 2014 Consumer Electronics Show. Rather than attempting to build competing connected devices for every part of one’s home, Revolv’s platform is truly smart, as it uses a recipe-like paradigm to provide command and control for a host of already-popular connected devices.

With an aversion to ecosystem lock-in, Revolv’s focus is to constantly add device compatibility to its hub so that users can benefit from additional functionality as manufacturers bring more connected devices to market. 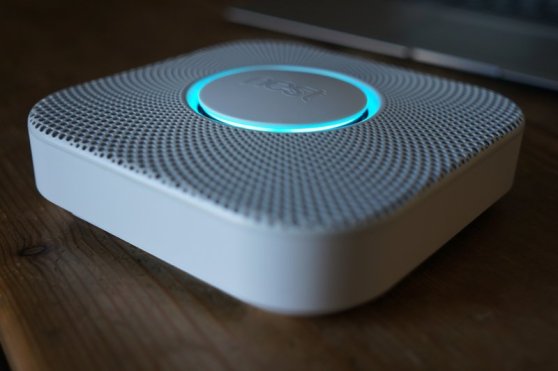 Above: The Nest Protect smart smoke and carbon monoxide detector.

Indeed, the $598 billion gorilla in the room Apple has taken a similar position to Revolv — that is to say it’s interested in working with smart home device makers rather than locking users into an ecosystem. Its tactic is a new app called Home, an iPhone app powered by Apple’s HomeKit SDK, which is set to debut in 2014’s iOS 8. With HomeKit, any interested connected or smart home device maker can give customers easy control of their gizmos via Apple’s Home app.  It’s unclear whether Apple will create a hub device to assist in what they intend to be a seamless integration of disparate gadgets.

The entire tech world eagerly awaits Apple’s Home solution, which should start taking shape later this month when iOS 8 is released and the iPhone 6 starts shipping. Samsung’s somewhat mature SmartThings platform is available for users to purchase today. This gives the Korean-based global conglomerate a small leg up in what’s sure to be an incredibly competitive race for the $100 billion smart home market.

Hopefully the winner will be a consumer base that benefits from myriad smart home options and a standard of living filled with automated ease.