If you enjoy watching animated sitcoms or football, chances are you’ve seen a commercial or two (hundred) for publisher Activision’s blockbuster shooter Destiny over the past few weeks.

The company spent approximately $6.7 million to advertise the online multiplayer game on television, according to ad-tracking firm iSpot.tv. That cash paid for two different spots to air more than 900 times across 21 networks since Aug. 21. Of those 900, more than 200 aired during the FXX network’s 12-day-long marathon of The Simpsons. Activision spent the most, however, on football. More than $2 million went toward placing Destiny ads during pro National Football League games. Other shows that got a lot of money to air Destiny ads include Comedy Central’s political satire The Daily Show with Jon Stewart and FX’s motorcycle-gang drama Sons of Anarchy.

Over the more than 900 times these commercials aired, they led to nearly 17 million online actions on social media and elsewhere, according to iSpot’s data. That means people were talking about or searching for Destiny online due to seeing an ad during a show or sporting event.

This data reveals what game publishers consider a triple-A level marketing campaign. It also highlights where Activision thinks it will find potential customers. If you like The Simpsons and The Daily Show, Activision thinks it’s worth thousands of dollars to market Destiny to you.

iSpot.tv provided a couple of infographics to help us better see where the two Destiny spots aired. Here’s one for the gameplay trailer: 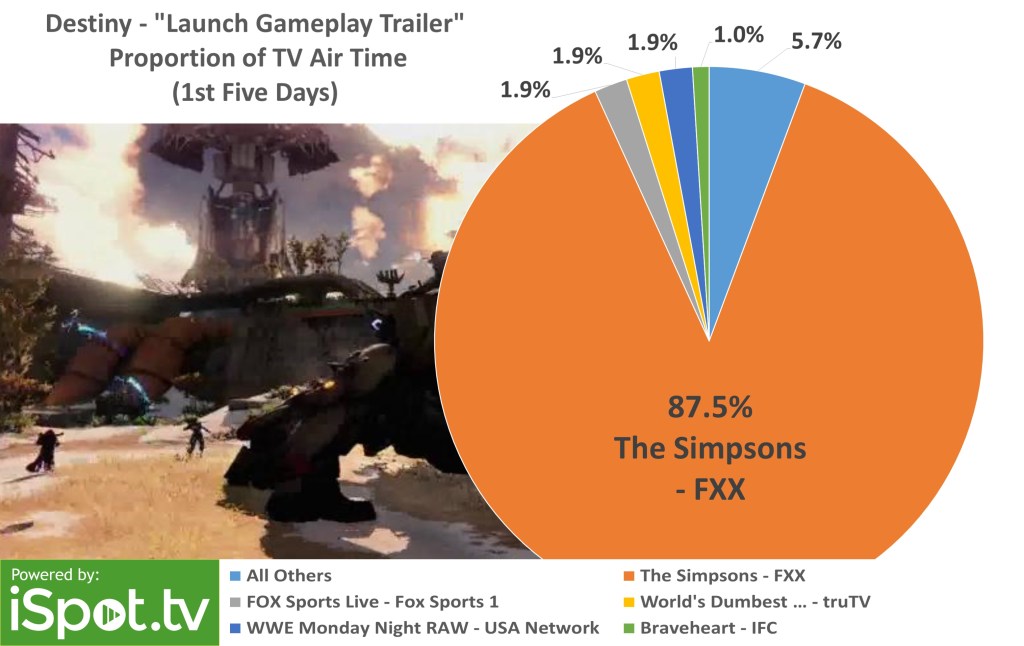 Above: The gameplay trailer aired primarily during The Simpsons marathon on FXX.

And here’s the results for the live-action trailer: 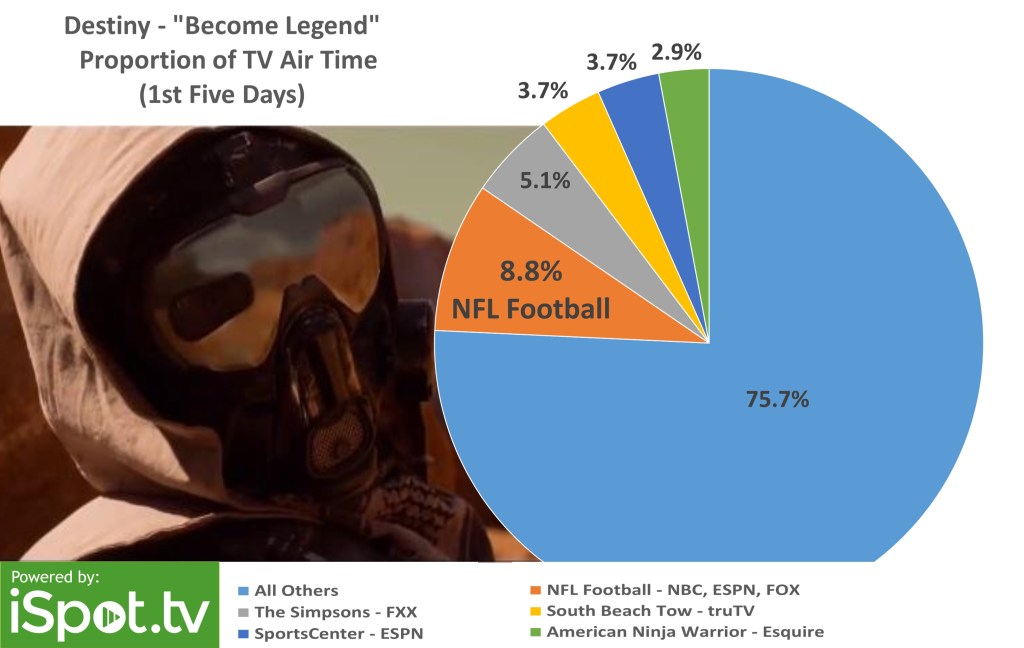 Above: The live-action trailer, which debuted after the gameplay video, had a much broader reach.

In addition to Activision’s own marketing of Destiny, brick-and-mortar retailer GameStop also ran its own ads for the game. The company spent nearly $1 million to air it on the Comedy Central, Cartoon Network, and Spike channels. That is common for big triple-A releases, where GameStop wants to help create excitement for things like midnight launches.

While gaming is a huge industry that spends millions on promoting its biggest releases, Activision’s marketing budget still doesn’t quite match up with Hollywood’s.

“From Aug. 21 through Sept. 12, Warner Brothers spent $16.3M on national TV spots for the family comedy This Is Where I Leave You,” a spokesperson for iSpot.tv told GamesBeat.

This Is Where I Leave You is Hollywood’s biggest movie in terms of marketing over the last few weeks. WB spent nearly three times as much to promote the movie on TV compared to what Activision spent on Destiny.

“So as big as the Activision marketing spend is, Hollywood still trumps all,” iSpot’s spokesperson said. “When it come to blockbuster films, we see $7 million to $15 million a week spent on titles.”

This Is Where I Leave You isn’t in theaters until Sept. 19, so we won’t know if its big marketing budget translated into box office success. For Destiny, we know the game’s hype helped it already generate $500 million in revenue.