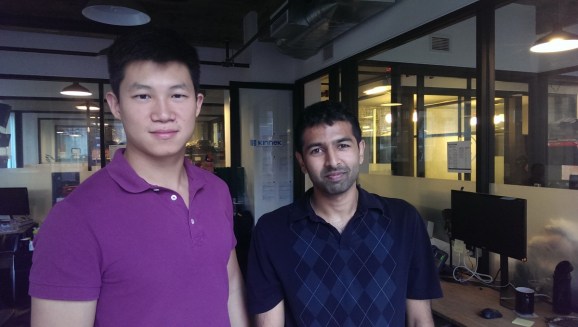 Believe it or not, supply purchasing for small businesses such as restaurants and bakeries is has not really evolved over the years. These businesses still find suppliers through the Yellow Pages or by chance, and stick with them because researching alternatives is just too much of a pain.

Enter Kinnek, a two-year old company that helps small businesses search for, find, and connect with the vendors they need to keep their businesses stocked up, and it’s announcing today that it has raised $10 million in new funding.

Kinnek is a cross between a directory and marketplace. When a small business owner needs to purchase something, they log into the website and complete a request-for-quote (RFQ) with all the specifications of the item they’re looking for. Vendors registered on the site who carry this item then prepare quotes and submit them to the business owner who can then review them and select from the vendors. Vendors and business owners can also communicate within Kinnek for further negotiations.

For the actual transaction, the parties have to take it offline, usually using old-school phone calls and paper checks, although Kinnek plans to support payments on its site eventually. For now, Kinnek’s only stream of revenue is from the fees it charges vendors for their membership in the network.

“If you go to Google as an SMB to [search for] the things you need … it’s just not there. There aren’t great resources even to make meaningful purchases, compare products, find reviews,” said Matrix Partners general partner Josh Hannah in an interview with VentureBeat. Matrix Partners led this round and Hannah is joining Kinnek’s board as part of the deal.

Currently, restaurants, bakeries, and food manufacturers make up the biggest categories of small businesses shopping on Kinnek, co-founder and chief executive Karthik Sridharan told VentureBeat. However, along with deepening its penetration into those verticals, Kinnek wants to strengthen its presence in others, especially the lodging, construction, higher education, pharmaceutical, and chemical industries, Sridharan said.

Kinnek has been catching investors’ attention since its early days. After graduating from the Angelpad accelerator program in 2012, Kinnek quickly raised $3 million in seed funding from a solid roster of investors, including SV Angel, CrunchFund, and Naval Ravikant among others.

Now, with Chinese e-commerce company Alibaba’s IPO looming, Sridharan said he believes investors are looking at his company as possibly “the next generation, kind of like an Alibaba for small businesses.”

“They’re very inspiring guys, huge energy and enthusiasm. They really understand the customers. The most obvious thing that got exciting is that they got things working a little bit, they’ve got some high volume transactions,” said Hannah.

Along with Matrix Partners, existing investors Sierra Ventures, Version One Ventures, Naval Ravikant, CrunchFund, Richard Chen, TriplePoint Ventures, Benjamin Ling, and others are also participating in this round.

Kinnek plans to use its new funds to significantly expand its 15-person team, both on the engineering and sales and marketing sides. The company plans to hire “a couple dozen” new people in the next six months, Sridharan told VentureBeat.

Kinnek was founded in 2012 by Rui Ma and Karthik Sridharan and is based in New York City.