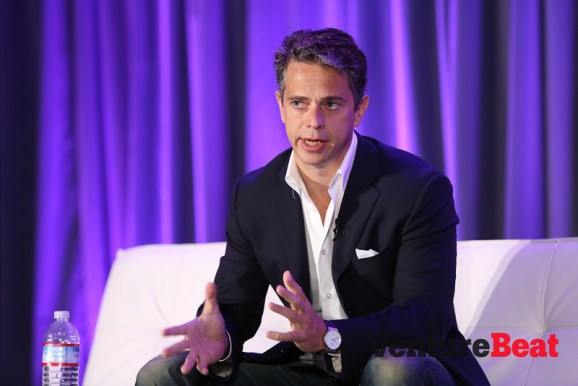 SAN FRANCISCO — According to game publisher Nexon CEO Owen Mahoney, a game lives and dies by its “fun factor.”

It’s an obvious point to make, but as Mahoney sees it, this is a point that developer cannot overemphasize, given — as he sees it — the lack of creativity from 2009 to early 2014. It was an unfortunate period where the main topic of discussion was the business of games, where knowing about MAU (monthly active users) and ARPU (average revenue per user) was more important than simply asking, “What have you been playing?”

The importance of fun and gameplay were the overriding themes in a fireside chat session with Mahoney regarding strategic partnership success at today’s GamesBeat 2014 conference.

If choosing between a game with impressive technology and low-quality gameplay versus a game with little technology but that is extraordinarily fun, Mahoney would be way more interested in the latter. And in visualizing a chart where the X-axis represents “fun” and the Y-axis represents “different,” Mahoney said, “We want to be at the upper right hand corner of that graphic.” He mentioned that if someone came up to him with a Clash of Clans knockoff, he’d be happy to “kick the tires,” but he’s ultimately uninterested. He’s more passionate about projects that try something he hasn’t seen before.

As a Western executive in an international company founded in South Korea with some Western management, Mahoney explained that cultural differences is not as important as different business philosophies. Whether it’s within a company with an international presence or making strategic partnerships, culture clashes aren’t an issue as along as all parties focus on quality gameplay. It’s all the more crucial when companies like Nexon work on projects where the life of a game truly begins after it’s live. According to Mahoney, the need for cultural affinity is similar to a marriage. And that also involves both parties doing their due diligence and checking in on each other.

As an aside, Mahoney cited games that have performed well in Asia, including League of Legends, FIFA Soccer, and Minecraft, while Western blockbusters like Grand Theft Auto V failed to sell well. When mentioning the success of Nintendo in the West, Mahoney reenforced the importance of art style, music, and gameplay.

Despite that Nexon has $2 billion in the bank and a strong desire to grow its 6 percent Western revenue stream, Mahoney says it still practices a cautious approach when it comes to partnerships and acquisitions. In light of Microsoft’s acquisition of Mojang today, Mahoney cites that the challenge with acquisitions is the expectation of continued revenue and maintaining that revenue.