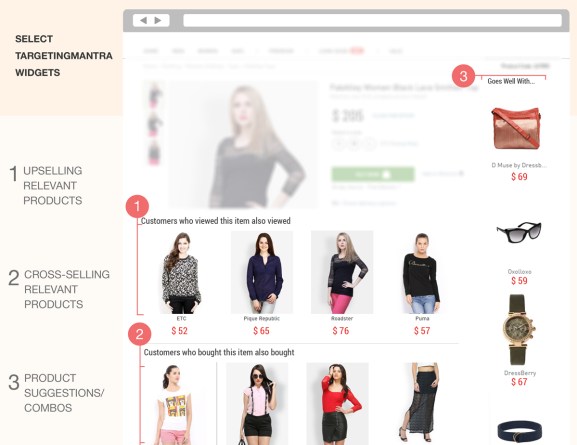 “Target the customer” has become a mantra among marketers. Today, the appropriately named TargetingMantra announced it has closed $1.1 million in funding to expand its Amazon-like personalized targeting service.

The company’s omnichannel “one-stop” personalization suite is designed to show product recommendations, similar items and other relevant cross-selling opportunities to customers, based on user behavior.

The funding — from 500Startups, Nexus Venture Partners, and One97 Mobility Fund — will be used to further develop its offering, create new products, and boost business development and marketing. Previously, the company’s founders bootstrapped their operations.

Personalization is a common practice on Amazon, Netflix, and many other sites, and the company — with offices in both New Delhi, India, and Mountain View, California — is focusing on bringing that capability to e-commerce sites in India, Brazil, and Singapore, in addition to the U.S. market. The startups core team knows the drill well, since they previously worked on Amazon’s personalization team.

“We don’t offer a platform,” CEO and co-founder Saurabh Nangia told VentureBeat. “We offer a few slots on a page where we use machine learning to show recommendations.”

Given the many recommendation services out there, how does TargetingMantra differ?

Nangia pointed to “the omnichannel nature” of his company’s service, especially its emphasis on mobile. “In emerging markets, mobile commerce is catching up,” he told us, with over a third of all e-commerce in India soon expected to be conducted via mobile.

He also highlighted “the efficiency of the algorithm, using an ensemble of machine learning models” in TargetingMantra, while other services, especially for smaller companies, “rely on rule-based engines” that offer recommendations based on what marketing managers think.

“Ours is based on behavior,” he said.

The biggest competitor? Nangia cited RichRelevance.com, but noted that “they are focused on the U.S. market.”