As someone who’s only half kidding when he says “I don’t play well with others,” I looked at Destiny with skepticism. While Bungie kept saying you could play it on your own, the studio also said the shooter was made to be played with other people.

Which is fine, if you like that sort of thing. But given that it comes from Bungie — y’know, the people who made the great campaigns in the Halo and Marathon games — and how much I prefer story-driven single-player stories to co-op modes and competitive multiplayer matches, I worried that Destiny would be a game I couldn’t play solo — but one I would really want to try alone. 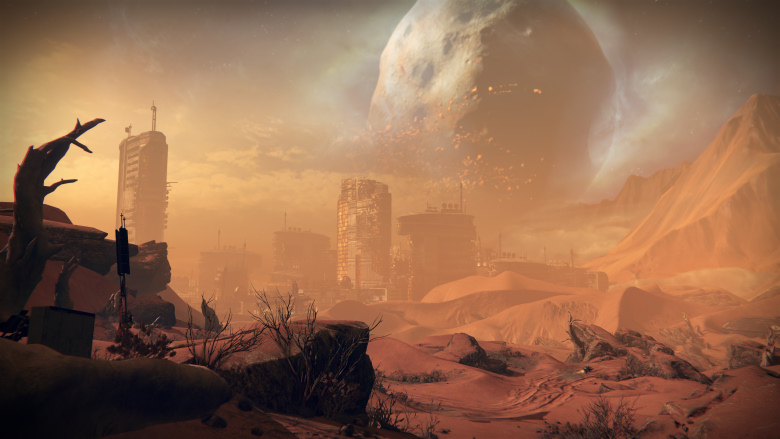 Above: Mars is just one of the lonely, barren landscapes in Destiny.

First off, you have no choice in the matter. You not only can’t stop other people from invading your space, but you also can’t even limit it to just your friends (though you can control who can formally join your game, turning solo missions into co-op). This is why you’ll sometimes find yourself moving in for the kill … only to have someone else finish the foe off.

What’s worse, having other people around ruins the stark vibe. In Destiny, invading aliens have decimated Earth and other human colonies, leaving huge swaths of land as barren wastelands. But these wastelands feel a lot less barren when other people are hanging around.

Then you encounter moments when the difficulty ramps up considerably, as if Desinty is asking, “Are you sure you don’t want some help?” You also can’t pause, which is really annoying if nature calls. Or your mom.

The thing is, after blasting my way through Destiny, a lot of the above issues didn’t bother me as much as they did when I started it. Sure, seeing other people around ruined the mood, having them kill someone I was trying to kill ruined the satisfaction I got from completing a difficult task, and not being able to pause … OK, mom just called back.

And, I’ll confess, I even had fun playing the occasional co-op mission or round of Clash (Destiny’s name for team deathmatch). Which is why Destiny is a game I really wanted to play solo … and I did. It really is that fun — even if you do have to play with others.