If any startup has recently made hordes of developers think deeply about the way they do their work and consider adopting new technology, it’s Docker.

Last year Docker released to the world its Linux container technology for easily packaging up application code and moving it from one server to another, streamlining development and deployment. Now thousands of projects build on top of Docker, and the technology has become the talk of Bay Area developers. So it comes as no surprise that Docker has just brought in $40 million in fresh funding, just eight months after announcing a $15 million round.

The new cash, announced today, will help Docker build on the open-source project at the heart of the company and will foster the development of management and monitoring products the startup and its partners can sell to companies big and small.

Those words carry serious weight. While month-old startups boast about how they use Docker containers in one way or another, Docker believes that with its container technology, it’s on the road to creating a standard for software development, as a lightweight, economical supplement to or even a replacement for virtual machines for handling multiple applications on each physical server.

VMware led the charge of the virtual machine at the turn of the century, and Microsoft followed with competing technology. Now it seems the time has come for a new company to grow big with application-development tools that can speed up development time and improve data center server efficiency.

“I think that we have the opportunity to build a truly world-class company that, you know, changes the way we build, ship, and run applications and that goes for a big IPO and beyond, and that’s how we’re organizing the company,” Golub said. “We clearly wouldn’t have taken a big round at a big valuation if we were planning on selling in the near future.”

The startup’s valuation, which a report last month estimated at $400 million, is now four times what it was at the time of the January round, Golub said.

You’d be right to be impressed with such rapid progress. And it’s worth noting that Docker would never have made such progress if investors hadn’t set aside their initial concerns last year when founder Solomon Hykes came forward with his desire to share the Docker-container programming for free under an open-source license.

Hykes had started dotCloud in 2011 as a platform-as-a-service (PaaS) cloud for building and running applications. But that business model has proven challenging for several companies. Thus the pivot and the associated name change, which in hindsight look like smart moves.

The Docker project quickly gained momentum. People have downloaded the open-source software 21 million times, up from 3 million in June. On GitHub, the code-repository website, Docker has picked up more “stars,” showing interest, than all but 27 other projects. 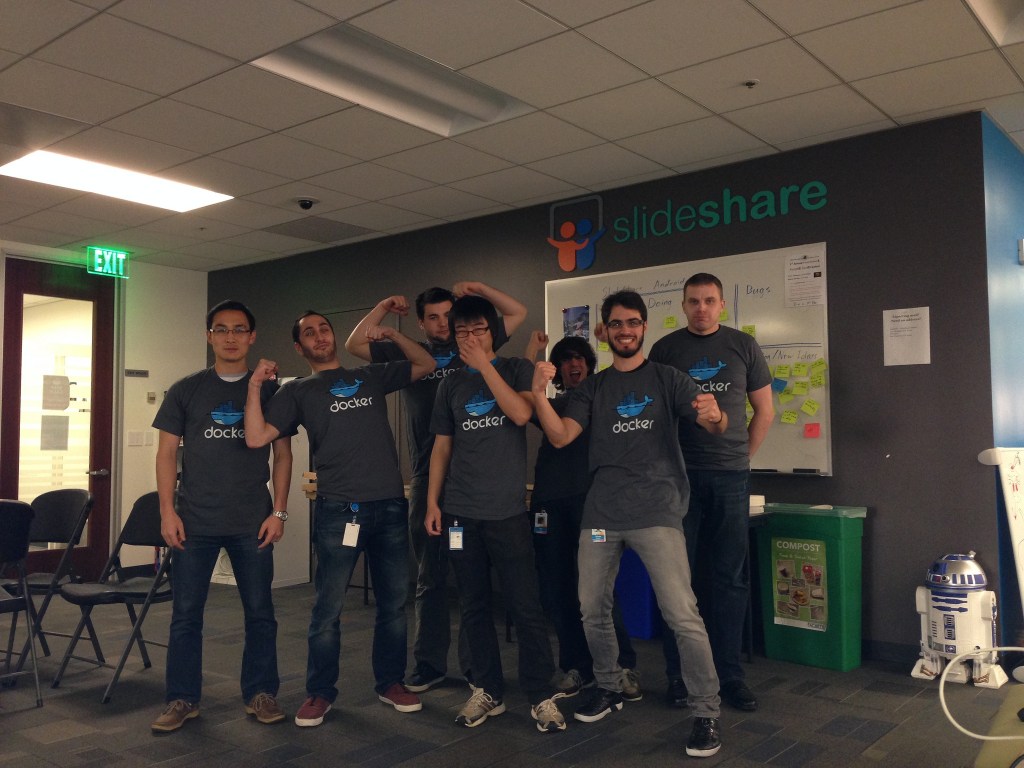 Above: The Slideshare team has gone Docker.

And other companies have noticed.

Companies like CenturyLink, CoreOS, and Tutum have been actively building on top of Docker.

Docker has begun acquiring companies in its ecosystem, including Orchard.

And Docker has felt so confident about its direction that it sold the dotCloud PaaS.

Contemporary companies like Baidu, Gilt, Groupon, New Relic, Spotify, and Yandex have been working with Docker containers, but the trend is taking hold more widely.

“We’re starting to see very significant — I would call it pilot usage in the more traditional enterprises,” Golub said. “Virtually every large bank has a Docker-related pilot of some kind, and lots of government agencies are using Docker. We’ve had health care companies using Docker.”

The startup wants to increase adoption further. It will come out with better ways to create applications that span multiple Docker containers. And Docker will build on its security features, too, in order to meet regulatory requirements, Golub said.

“I think that there are many people who want Docker to have all of the sort of security, networking, storage, and management capabilities that surround VMs [virtual machines] today,” he said.

Sequoia Capital led the new round in the San Francisco-based company. Benchmark Capital, Greylock Partners, Insight Venture Partners, Trinity Ventures, and Jerry Yang also participated. The startup employs 55, and that number should hit 80 by the end of the year.

“I think you always want to raise money before you need it,” he said, “and if the company is doing well, and if the funding market looks good, and if you have the kind of partners wanting to look at us like we did, it’s just silly not to do it. The challenge is to avoid acting like a company that has a lot in the bank.”