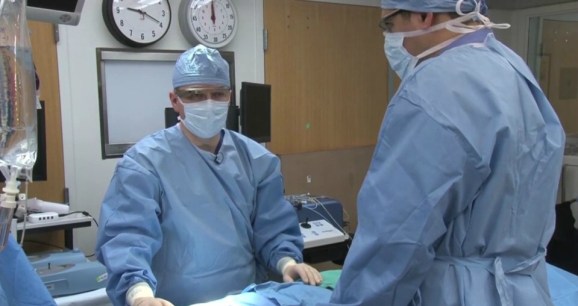 One of the ripest markets for Google Glass and Glass-based apps may be healthcare. While patient care has become increasingly data-driven, doctors need a way to receive the data while remaining hands-on with patients.

Can wearables in the OR improve clinical outcomes? Although it makes sense, there’s little empirical evidence for or against wearables. But a new study may help answer that question.

The study was conducted by Stanford Medical School and VitalMedicals, which makes the real-time vitals app (VitalStream) that was running in the Google Glass wearables during the surgeries. In it, a group of 20 Stanford residents performed two types of surgeries — on dummies — one with the help of Google Glass and one without.

Their performance was markedly better while using Glass.

One test demanded that the resident perform a bronchoscopy, in which the surgeon makes an incision in the patient’s throat to access a blocked airway. The surgeon might also insert a camera down into the lungs to find problems. The residents using VitalStream recognized critical desaturation 8.8 seconds faster than the control group (who didn’t wear Glass).

In another test, the patient required a thoracostomy tube placement through the chest wall to drain fluids. The residents using the VitalStream app recognized hypotension in the patient 10.5 seconds sooner than the control group.

The residents wearing Glass looked up at monitoring equipment during surgery far less, which allowed them to stay focused on the patient and the procedure, Ash says.

The study resulted in compelling preliminary evidence that the head-mounted display can be used in a clinical setting to enhance situational awareness and patient safety.

You can see the technology in action in this video.

Stanford and VitalStream plan to publish a full paper in a medical journal detailing the tests and the results. In the meantime you can read the abstract here.