SAN FRANCISCO — Getting Apple to feature your mobile game can make all the difference on whether it’s a hit or a bust on the iTunes App Store. So pitching it in a way that gets the company’s attention is crucial for game developers.

Michael Ehrenberg, a former Apple App Store marketing manager and current consultant, shared his advice about how to do that the right way at GamesBeat University, a track on tips and tricks for game makers at our GamesBeat 2014 conference today.

“It’s all about storytelling,” Ehrenberg said in his opening statement.

He told a story about sports betting — a passion of his that led him to leave Apple for a new gig consulting — and how he got so excited about a March Madness tournament where he, his friends, and his father, nicknamed “the Oracle of Akron” for his ability to bet right on college basketball, had $60,000 riding on a single college basketball game. By talking about their passion for that game, Ehrenberg said he was able to convey his passion for sports betting and what is interesting about his new gig. And that is what app makers need to do when it comes to pitching Apple.

He also said that game makers should remember that the audience is fickle and emotional. In your pitch to Apple, he said that you should “grab ’em by the throat and never let ’em go.”

During a presentation to Apple people, he said, “Make the punch at the end count. Everything in between is about maintaining their attention.” He also said that everything in your slide deck should be consistent with the look and feel of your game.

If you don’t have a good contact with Apple, you can always send a pitch to AppStorePromotion@apple.com. The Apple staff reads those emails and passes on the good ones to the team that decides what receives featured treatment.

Ehrenberg said he recently helped pitch a game, Hit Tennis 3, to Apple, and included a lot of information about it in a few slides, like the one below. Ehrenberg used to be a marketer at mobile game publisher Gameloft, where his job was to pitch Apple. At Apple, his job was to help identify the games that mattered.

His advice, which he shared in longer form earlier this year, is rare in that Apple itself rarely explains its ways in a public manner.

Previous tips he shared made sense. Make a great game. Make sure it exploits the newest features of the iOS software as well as Apple’s latest hardware. And don’t just focus on your game — concentrate on selling your game. That means you have to sell it not only to customers but to press outlets and to Apple itself.

When Ehrenberg was at Gameloft, he would stake out a spot at a coffee house near Apple. Then he would call his contacts there and say that he had a meeting with someone at Apple and that he wanted to show them a new game. If they spared 15 minutes for meeting him, that was all he needed to keep them informed about an upcoming game.

Those who get featured will feel like they’ve won the lottery, given how much competition is out there.

The App Store team usually wants to know the details of how your game takes advantage of the technology in the latest iPhone or iPad. You have to make sure that the frame rate of your animations is good. When they see what they want, they will know it. You also want to make sure that you give Apple some kind of exclusivity so that it can get a competitive advantage over rivals.

Some marketing is seasonal. You may have to tell Apple about a Halloween game promotion about a month before the holiday.

You can’t pull tricks or do anything deceptive in your apps. And you have to be wary about including any mature content, which is a red flag for Apple. If you’re targeting a game for kids (which is going to be less and less permissible in the future), you better not include a $100 virtual goods purchase in the game.

You can test drive your products in certain markets. But don’t put them into markets where the press is sure to discover them and write them up. That will steal your thunder, and it may lose you the chance to get featured. 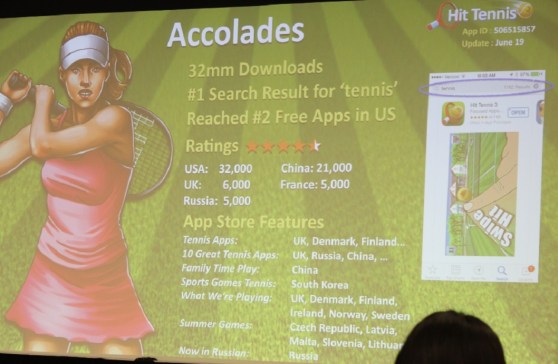