The most interesting wearable I’ve used yet isn’t a fitness tracker or a superfluous smartwatch. It’s a connected headband that helps you focus your thoughts.

With the Muse headband ($299), InteraXon is basically gamifying meditation — or at the very least, gamifying a path towards a more focused and relaxed mind.

And it’s more than just a gimmick. After using the Muse for a few weeks I noticed that I approached problems with a calmer and more focused mind. Situations that would previously frustrate the heck out of me (hello, breaking news) felt less taxing. Unlike most gadgets, its benefits extend far beyond when you’re wearing it.

Founded by CEO Ariel Garten, InteraXon raised nearly $300,000 for the Muse on Indiegogo, and it went on to raise $6 million from investors last year. Much like Oculus VR’s Rift headset, another crowdfunding darling that raised $2.3 million on Kickstarter (before VC money poured in and the eventual $2 billion Facebook acquisition), Muse makes a strong case for the viability of young hardware-focused startups.

Mindfulness, the notion of focusing your thoughts in the present moment, is very much in vogue, so it’s not surprising that InteraXon managed to raise investor interest. What is surprising is that it actually works pretty well.

Zen and the art of gadget design

To put it simply, the Muse brings electroencephalography (EEG) technology, which detects brain activity, to the masses. Its curved and minimalist design makes it look like something you’d expect royalty from the future to wear, like a high-tech crown. There aren’t any stray wires and electrodes, just a simple, clean curve, made up mostly of a flexible, rubberized material.

The Muse sits above your ears, with the front part of the band pressed against your forehead. It is light and comfortable to wear for extended periods of time (after all, you wouldn’t want anything about the device’s fit disturbing your calm). It communicates with an iPhone or Android app wirelessly to walk you through calming exercises. While it’s not required, it was helpful to wear headphones while using the Muse to further block out the world and concentrate on its calming exercises.

After charging the Muse (for some reason it has two USB ports for charging, though you only need to plug in one at a time), you just need to pair it with your smartphone over Bluetooth. Next, open the Muse “Calm” app, which guides you through the basics of fitting the device on your head. I had to extend the Muse headband a bit for it to fit, but that was no tougher than readjusting a pair of headphones.  The Muse should be tight enough so all seven sensors can properly measure your brain activity but not so tight that it’s uncomfortable.

While it’s a mostly sturdy device, I always felt like I had to treat the Muse delicately because of the paper-thin sensors for the front of your forehead. It doesn’t feel like something you can just throw in your bag and bring to the office. 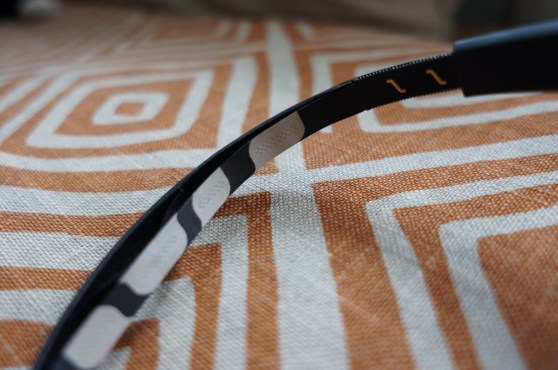 Meditation for the smartphone age

The Muse Calm app doesn’t feel as polished as the Muse hardware, but it’s colorful and easy to use. A short, narrated training process gives you a sense of how the headband works and also kicks off a quick calibration process, which involves thinking of a few items that fit specific categories (like “singers” or “brands”). That gives the Muse a baseline reading for when your brain is active, so it can better tell when you’re truly relaxed.

Once you’re done calibrating the Muse, you’re thrust into a full-fledged session, which can be anywhere from three minutes to 12. With headphones on, the Muse app basically recreates the sensation of sitting beside the ocean, with sounds of waves lapping the shore. The goal of each session, as much as there is one, is to relax yourself as much as possible. The app’s friendly instructor (you can choose a female or male voice) gives you one method of focusing your thoughts and calming your mind: Just count every breath you take, while trying to block out other distracting thoughts.

The seaside environment of the Muse app also reacts to your brain activity in real time. The wind picks up significantly if you mind is active and distracted — it’s a trip to notice that your thoughts alone can control something like the wind. If you’re calm for an extended period of time, you’ll be rewarded with the sound of birds landing nearby.

Once your session is completed, the app charts how long your mind was busy, neutral, and relaxed, and it rewards you points for your relaxed and neutral time. Sure, that doesn’t sound very Zen, but it’s an easy way for a mainstream user to judge if they’re actually using the Muse properly. If you’ve ever wanted numbers to prove that your time spent meditating works, Muse is just the ticket. 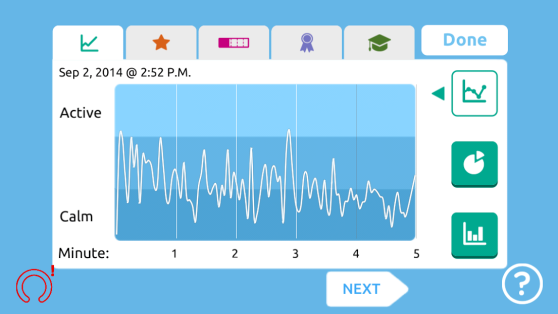 Above: The breakdown from one of my Muse sessions

The Muse Calm app lets you view the charts and details of all your past sessions. And once you’ve racked up enough points, you unlock additional ways to view your data, including a timeline view and personal insights.

It took a few sessions, but eventually I got into the groove of Muse’s sessions, and I began to look forward to them just as much as going for a run.

The Muse isn’t a magical device that will make you more relaxed, but if you put the work in, you’ll likely feel the benefits of regular meditation sessions. In general it helped me feel cope with stressful situations like huge press events, endless lines at the post office, or being crammed into a hot and AC-less subway car, better than I used to.

The other big benefit? Once you use the Muse enough, it won’t be tough for you to carve out quiet meditation sessions throughout the day without using the Muse at all. It’s sort of like training wheels for mindfulness. 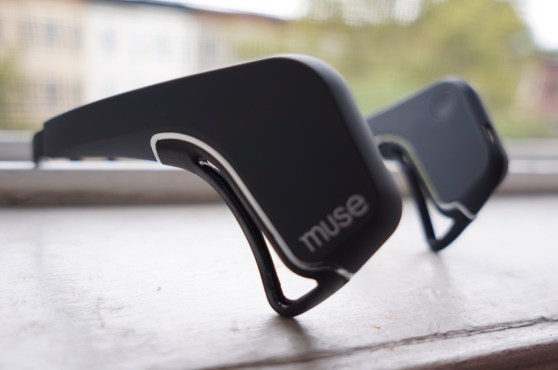 The biggest issue with the Muse so far is its price of $299, which puts it in the realm of expensive toys, rather than something a typical consumer may want to pick up. Given the design and engineering work that went into the Muse, I can understand why it’s so expensive. But it sure makes the device hard to recommend.

You may be better off trying to save your money and take some actual mindfulness meditation courses. You’ll likely still end up paying something for those, but it’ll probably be less than $300. Plus, you know, it’s nice to actually interact with other humans.

And for $299, the Muse is a tough sell since it really does only one thing right now. Garten previously mentioned that Muse’s brain-sensing tech could be used for other applications, like games or controlling devices around your home, but those remain pie-in-the-sky dreams. Right now you’re buying the Muse for one thing: calming the heck down.

The Muse is one of the most affordable brain-reading gadgets right now. Emotiv has been developing brainwave-reading technology for years, and while its devices were previously more expensive, it has an upcoming device, the Emotiv Insight, that will also sell for $299.

A solid meditation gadget — if you can afford it

If anything, the Muse is a sign of what’s to come the world of wearables. It’s still technically an activity tracker, but it’s nothing like the fitness-tracking gadgets out there right now, which are mainly focused on tracking external things like the amount of steps you take. The Muse makes a clear case for activity trackers that look deeper within our bodies.

It’s just too bad it’s out of reach for most consumers at the moment. If it were closer to $100, which may be possible in the next year or two, the Muse could be a must-have gadget for anyone who wants some peace of mind.

Updated 9/17/2014: A previous version of this article misstated the price of Emotiv’s devices.