Today Amazon launched two new Kindle e-readers, a $79 base model Kindle with a touch-screen, and a higher-end $199 device, the “Kindle Voyage,” which features a 300 DPI screen and pressure-sensitive sensors under the bezel for turning pages.

The new Kindle and Kindle Voyage are both available for pre-order now and will ship this October.

Amazon’s new devices cater to both the highest and lowest ends of the market, and together with the Kindle Paperwhite they form a new trio of e-readers for the company. The Paperwhite will continue to be available for $119.

At a private press presentation earlier today, Amazon called the Kindle Voyage “the most advanced e-reader we know how to build right now.” The Voyage weighs 6.4 ounces and is “the thinnest product that Amazon’s ever built” at 7.6 mm thick, the company said. Unfortunately, the device costs $199 with Amazon’s “special offers” ads, and without 3G. If you want an ad-free 3G Voyage, you’ll have to fork over $289 — far too much for an e-reader.

In terms of build quality, the Voyage is certainly an improvement over Amazon’s previous highest-end e-reader, the $189 Kindle Paperwhite 3G. However, when compared side-by-side, the Voyage’s 300 DPI screen didn’t feel any easier on the eyes than the Paperwhite’s 212 PPI screen. But the difference between the two devices can be easily felt. The Voyage feels both lighter and far sturdier than the Paperwhite. 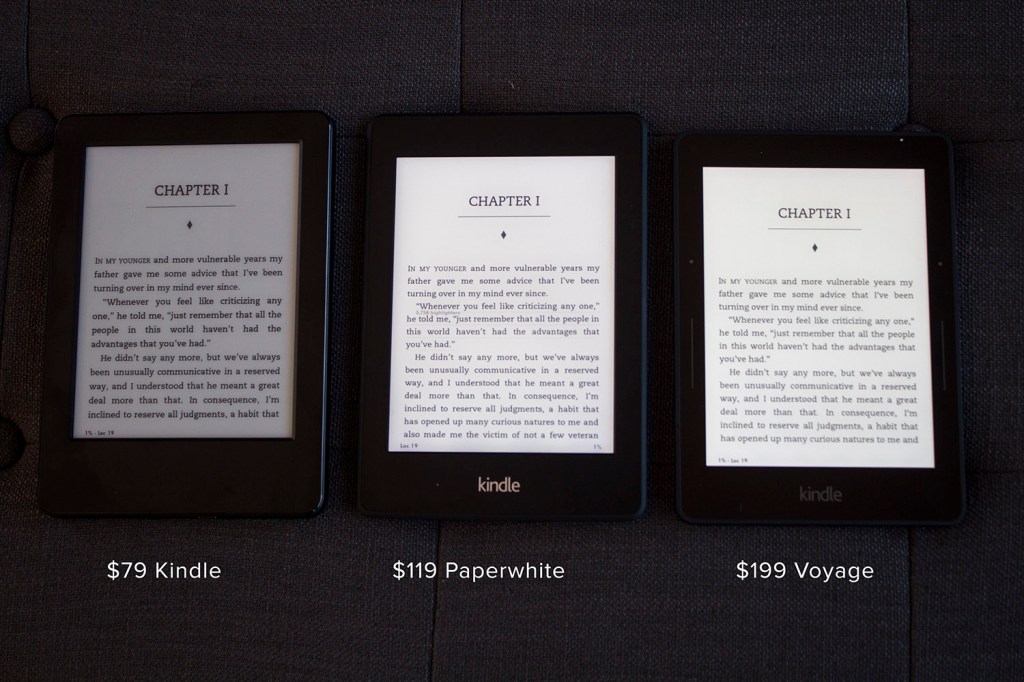 The Voyage’s new “PagePress” feature, which enables users to turn pages by squeezing the bezel of their screen, also appears handy and well-executed. However, once we played with the device, it didn’t really transform the overall experience very much.

The rest of the family

Next to the Voyage, Amazon’s lowest-end Kindle e-reader feels like a toy. The combination of a touch screen and a $79 price point, however, certainly makes the cheapest Kindle a tempting entry-level device.

Both the Voyage and the revamped Kindle serve a purpose, but the two devices perhaps best serve as bookends for the Paperwhite, which by comparison looks like a smart middle-of-the-road compromise between price and build quality.

Although e-readers no longer drive much hype, Amazon remains king of this category of devices. Today’s updates likely won’t blow you away, but they reaffirm Amazon’s dominance in this segment.