Link and Zelda have always had grace and nobility. Now they have some swag.

Every game in Nintendo’s The Legend of Zelda series, whether it’s 2D, 3D, portable, or on a console, is an action role-playing game that focuses on exploration and puzzles with some simple combat thrown in. Hyrule Warriors, the upcoming spin-off coming out for the Wii U on Sept. 26, is pretty much just the combat. If a regular Zelda game is The Lord of the Rings, this is Conan the Barbarian.

You might think that getting rid of the series’ slower and more methodical aspects might tarnish everything, but Hyrule Warriors is actually more engaging than you’d expect. 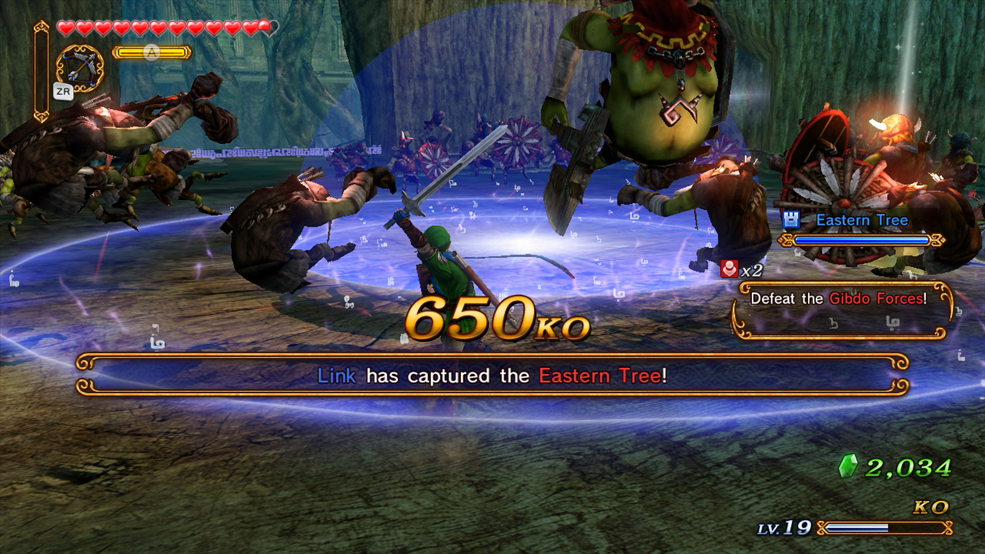 Above: You’ll be killing a lot of monsters. But don’t worry, they all look the same, so I’m sure they don’t have feelings or anything.

Fighting in a regular Zelda game usually requires slowly swinging a sword and occasionally using a secondary item like a bow or a bomb. Combat in Hyrule Warriors, however, is much faster. Smashing the attack button launches your character into a series of quick blows that easily destroy any group of monsters in front of you. Combos can take out even larger clusters of enemies with flashy spells.

It sounds simple, and for the hordes of mindless creatures that make up most of your opposition, it is, but stronger enemies and bosses take more effort to defeat. Some of them have weaknesses to certain items (you don’t earn quite as big an arsenal as you would in a normal Zelda game, but you have access to classic gear like the boomerang and hookshot), and some enemies can leave themselves open to powerful (and, again, flashy) counterattacks.

The combat is a bit spammy and repetitive, but it really does look cool. A four-hit combo can have one character jumping around a battlefield or summoning fireballs from the sky. Special moves that you can only use once you fill up a meter are especially cinematic (and often include fun nods to other games in the series, like one that summons the Great Deku Tree from Ocarina of Time). It’s crazy and hectic in the best way possible. 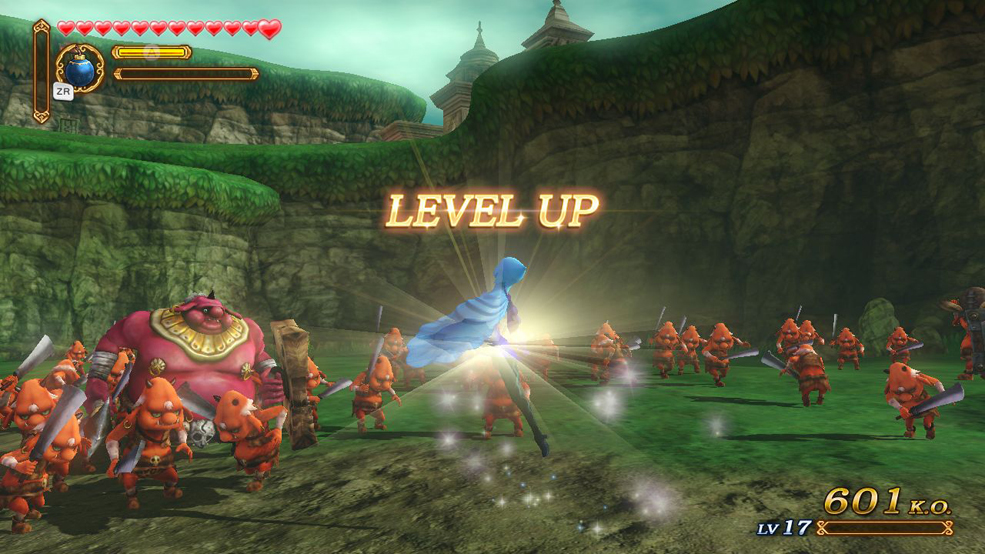 Above: Dance battle! Take it, Fi!

You get to play as other characters besides Link

Pretty much every Zelda game forces you to play as Link, the green-clad hero with a thing for swords and shields. But Hyrule Warriors has a large roster of mostly recognizable characters from the franchise, including Princess Zelda herself, her bodyguard, Impa, and even evil characters like the series’ main villain, Ganondorf. Each of them have distinct moves and combos, so they all play a bit differently, and most of the missions in the story mode let you pick between a few different fighters.

Some people have long asked Nintendo for a Zelda game that actually stars Zelda (no, that terrible one on the CD-I doesn’t count). This isn’t exactly that sort of game, but it is nice to not only see the heroine take charge and kick some butt but to actually get to control said butt-kicking.

While Hyrule Warriors has a few modes (all of which revolve around the same basic premise of fighting enemies and capturing forts over one large map), the campaign is the centerpiece. Traditionally, the Zelda series has intricate stories, which is an easier feat to pull off in a text-heavy role-playing game than in an action-focused affair like this. However, Hyrule Warrior’s campaign still tells a decent tale with an interesting cast of returning and new characters.

I especially enjoyed how this was the first Zelda to actually play around with the idea of the series’ multiple timelines. For those that don’t know, the chronology of the franchise is pretty intricate, with games taking place across different dimensions and separated by massive differences in time. Without getting into specifics, Hyrule Warriors is the first Zelda to actually acknowledge the idea of different realities in the mythology, using that opportunity to bring in characters from past games like Midna from Twilight Princess and Princess Ruto from Ocarina of Time. 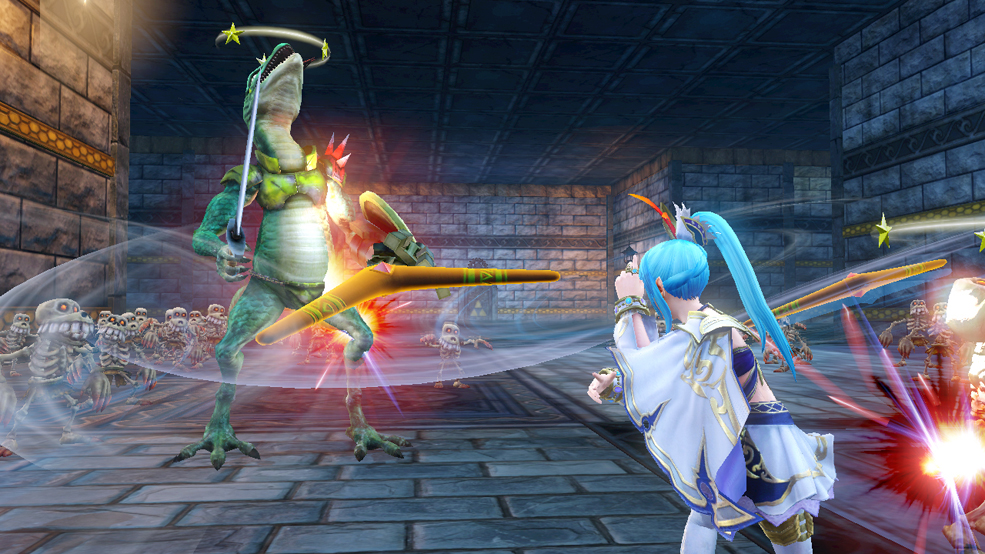 Above: Seriously, how embarrassed would you be if a boomerang took you out in the middle of an epic battle?

The Zelda series always has great music, but Hyrule Warriors actually surprised me with its creative score. It uses familiar songs from the franchise, but each one gets an epic, metal-heavy remix. These energetic and inspired arrangements also take old ideas from the series and give them a shot of electricity.

The combat is fun, especially when you’re mowing down huge groups of enemies with a single blow, but it does begin to feel a bit shallow after a while. Despite all of the different characters and their aesthetically differing move-sets, they all essentially have similar attacks (mostly moves that either attack right in front of you with a short range or ones that take out a large group of people in front of you). Sure, it’s fun to see the different animations and spells, but they all basically serve the same purpose. Whether you’re playing as Link or Impa, you don’t really need to drastically change your strategy.

Also, while Hyrule Warriors has a few modes, they all basically boil down to the same formula: capture enemy bases, defend your own, and defeat bosses. The progression that comes from leveling and unlocking characters prevents this monotony from becoming overwhelming, but the repetitiveness makes Hyrule Warriors just a hack-‘n’-slasher (albeit a good one). 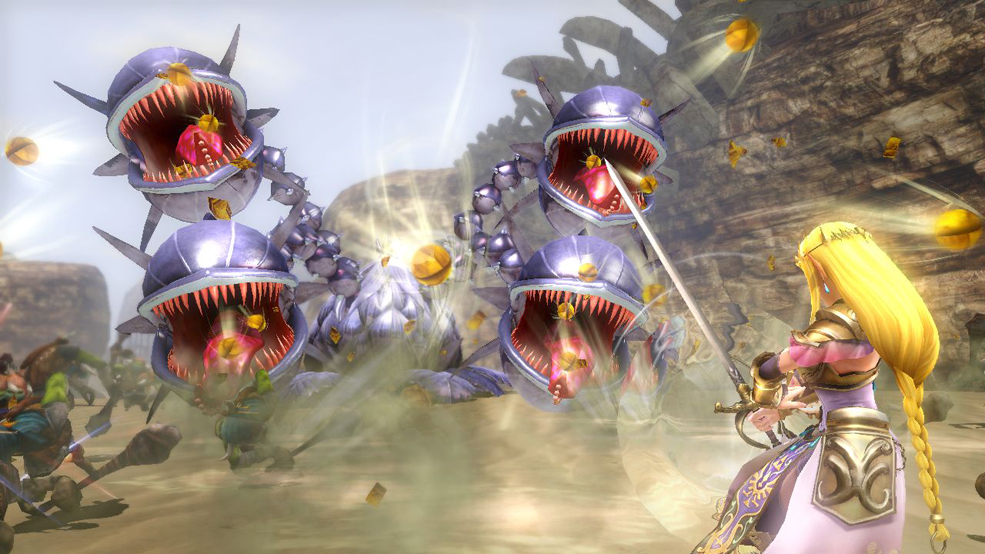 Above: Kill it! Kill it with magic!

It doesn’t spread the love

Hyrule Warriors is a tribute to the entire series, but it cares about some Zelda games more than others. Specifically, all of the playable characters that don’t appear in multiple entries (like Link, Zelda, and Ganondorf) come from either Ocarina of Time, Twilight Princess, or Skyward Sword. Sure, you’ll see some nods to other games (Zelda can use the Wind Waker as a weapon, and the moon from Majora’s Mask makes an appearance), but as a Zelda fan, I would have liked to see more representation here.

I love Ocarina of Time as much as anyone, but wouldn’t it be cool for hardcore Zelda fans to see a character from the Oracle games? Why not add Vaati, a series villain whom we’ve never seen in a 3D installment? It feels like it’s not really celebrating the entire franchise instead of just focusing on some of the most obvious hits and recent releases.

Hyrule Warriors has little in common with a traditional Zelda game. You don’t solve any puzzles, you don’t explore any dungeons, and you certainly don’t break into anyone’s house and destroy all of their pottery. Still, it definitely works as a spin-off that focuses almost entirely on action. It’s fun to see Link and friends battle with the kind of glitz and glamour you’d expect from an episode of Sailor Moon or Dragon Ball Z. I’m not saying I’d want that in a real Zelda installment, but it works in this surprisingly engaging off-shoot.

Hyrule Warriors is out on Sept. 26 for the Wii U. Nintendo provided GamesBeat with a digital Wii U copy of this game for the purposes of this review.