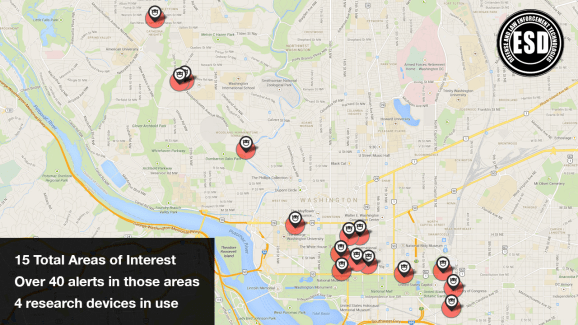 New interceptor towers discovered near the Senate and White House

ESD America, the makers of a secure phone that originally made public the existence of mysterious “interceptor” cell stations in the U.S., tells VentureBeat there are over a dozen more near the Senate and the White House.

“My suspicion,” he said, “is that it is a foreign entity.”

In the course of doing its business in selling and maintaining its Cryptophone 500 phones — secure mobile phones for clients who need and can afford military-grade security — ESD America said it has randomly discovered the existence of at least 18 interceptor cells in the D.C. area. Fifteen are in downtown Washington, including several very near the Senate and the White House, plus another three in northern Virginia.

Goldsmith said the discoveries were made after traveling only through “a very small portion of the city” over a day and a half.

Two kinds of interceptors are being identified: IMSI Catchers, which can steal subscriber info for later monitoring, and GSM Interceptors, which can listen into calls. Goldsmith said a complete interceptor includes both capabilities.

While the interceptors are sometimes referred to as “towers,” they “can be the size of a briefcase,” ESD America’s director of applications, Buzz Bruner, pointed out. In other words, many if not all of the identified interceptors near the top centers of the U.S. government could be mobile.

“Realistically,” Goldsmith said, “does [any federal agency] have a real need to monitor the Senate?”

What’s more, he said, “It’s very unlikely they [U.S. agencies] would use a GSM Interceptor,” since “they have ways [to tap conversations] through the carriers.

“It doesn’t seem entirely logical [the feds] are doing it,” Goldsmith said, adding that on the day earlier this week when they found the interceptors near the Senate, that federal body was conducting hearings on ISIS, among other things.

He also noted that some have been spotted near Embassy Row, including the Russian embassy.

When we spoke with ESD America earlier this month, they had located 19 interceptors around the country. Now, because of tips from Cryptophone users nationwide, that number outside of the D.C. area has grown to “about 45.”