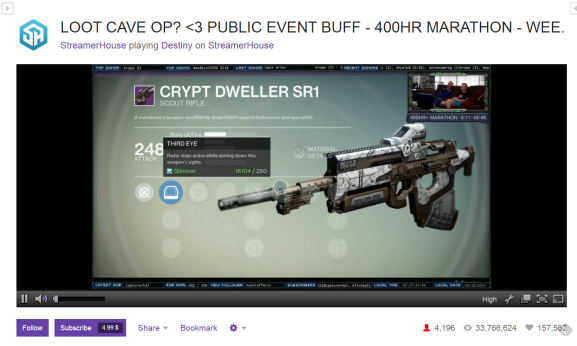 One of the biggest releases of 2014 generated a ton of buzz thanks to livestreaming video.

The gameplay broadcasting site Twitch revealed that fans tuned in to watch developer Bungie’s new sci-fi multiplayer shooter Destiny almost 20 million times in the first week of its release. Viewers collectively spent 240 million minutes watching the blockbuster in action. That makes Destiny one of the biggest livestreaming games of the year, and it shows the power of Twitch to reach massive audiences of gamers. That is one reason Twitch is so valuable to a company like Amazon. Earlier this month, that gigantic Internet retailer dropped $970 million to acquire Twitch.

“To date, Destiny is the biggest console game launch of the year on Twitch,” the company’s vice president of marketing, Matthew DiPietro, said. “Our passionate community of broadcasters attracted more than 5 million unique viewers in the first week.”

Destiny debuted Sept. 9 for Xbox One, PlayStation 4, Xbox 360, and PlayStation 3, and some of the players on the new consoles took advantage of the built-in streaming functionality that both Microsoft’s and Sony’s consoles have. Anyone can start broadcasting with the push of a button, and lots of people were obviously taking advantage of that feature.

While gameplay livestreaming is huge, and the new consoles offer it right out of the box, most of the biggest games on Twitch are PC releases. League of Legends, Dota 2, and Counter-Strike: Global Offensive often dominate in terms of total viewers. Destiny proves that the bigger console games can break into that group, and will likely only have more people broadcasting and watching as the generation goes on.

“Our community has always blown us away with their desire to share, entertain, and inspire,” said David Dague, Community Manager at Bungie. “Watching them broadcast their Destiny experiences on Twitch – from the Tower to the Crucible to the Vault of Glass Raid – has been nothing short of amazing.”

Destiny has more than 16,300 viewers on Twitch now, which is more than the block-building cultural phenomenon Minecraft at 16,000 even.