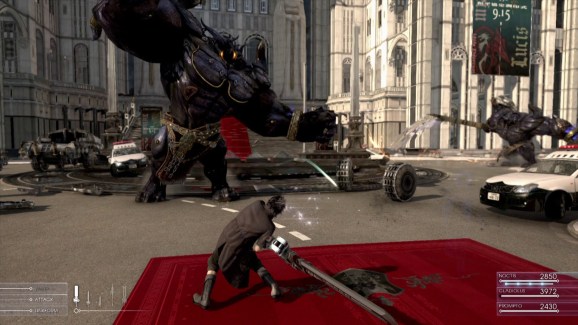 Square Enix is getting anxious to roll out the red carpet for Final Fantasy XV.

In eight years, most people could earn get two college degrees, find the love of their life, marry them, start a family, and send the first-born off to kindergarten. It is, however, apparently not enough time to make one Final Fantasy game.

At the very least, time is up for Tetsuya Nomura, who had served as Final Fantasy XV’s director since the action role-playing game began development in 2006 (back when it was known as Final Fantasy Versus XIII). According to Kotaku, developer and publisher Square Enix has announced that Nomura will give up the director’s chair to former FFXV co-director Hajime Tabata, who previously directed other action-based Final Fantasy games, Crisis Core: Final Fantasy VII and Final Fantasy Type-0. Nomura will now focus entirely on Kingdom Hearts III, the anticipated sequel to the popular Disney/Square Enix crossover series.

“As the director of Final Fantasy XV, Tetsuya Nomura has mainly worked on the original concept for the story and universe in addition to creating the characters,” Square Enix chief executive officer Yosuke Matsuda said in an official statement sent to Kotaku. “Hereafter, he will be focusing his efforts on the production of titles that can only be made possible by Nomura himself and delivering products that exceed the quality of past titles, starting with another one of his representative projects, Kingdom Hearts III. Square Enix will continue to work on these titles with the best staff formation in an effort to deliver them to everyone as soon as possible and appreciates your continued support.”

Final Fantasy XV’s incredibly long development period is reaching epic proportions. By comparison, Duke Nukem Forever, a game mostly known for how long it took to actually come out, took 14 years to finally hit the market in 2011 after its first developer, 3D Realms, unveiled it in 1997. Final Fantasy XV isn’t quite on that level yet, but its eight-year-long development, which included a change in console generations, must be costing Square Enix a lot of money.

Having Nomura focus entirely on Kingdom Hearts III could help speed along its development. The last Kingdom Hearts for consoles, Kingdom Hearts II, came out back in 2006, so it’s been an equally long eight year wait for fans of that series to get a true sequel (in the mean time, Square Enix has released multiple spin-off entries in the series for portable systems).

Square Enix also released a new trailer for Final Fantasy XV, which you can view below.