Players of the massively multiplayer online game World of Warcraft, get ready to build up your garrisons.

The new personal towns, which are a mix of player housing, quest hub, and crafting center, will launch with the Warlords of Draenor expansion pack Nov. 13. But they’re not just a new toy to play with or another grind to suffer through, WOW lead game designer Cory Stockton said in an interview with GamesBeat.

Blizzard Entertainment expects Garrisons to change nearly every part of the game for players: leveling up characters, crafting items with professions, how you gather a large group to tackle a dungeon boss, and more.

“People will come to it for a large feature they heard was cool,” he said. “But week after week, you’ll continue to find new things that will introduce you to new gameplay.”

Players may set up a garrison almost immediately at the start of Warlords.

“Within the first hour, you’ve created your garrison and are doing quests,” Stockton said. 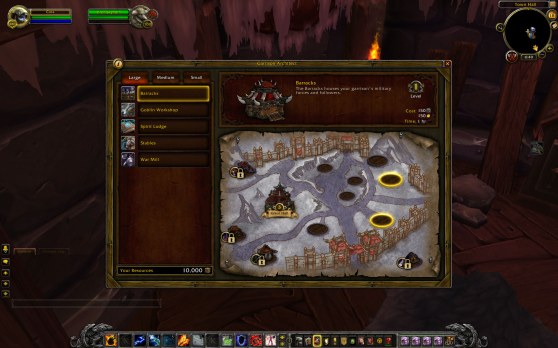 Above: You can choose which buildings to put in your garrison, making it something like a personal town. You can build a maximum of two large structures, two medium and three small. Each offers different benefits.

Horde players create their personal towns in Frostfire Ridge, with Alliance players set for Shadowmoon Valley. All players locate their garrisons in the same place in the game world, but when you enter, you see only your own town (unless you’ve been invited to visit someone else’s). Each character you play has its own garrison, and they develop with you as you level up.

In addition to the main garrison, every Draenor region/zone has outposts. You choose from one of two buildings to put in each zone (each of which offers specific bonuses). You can change your selection once you reach level 100 if you’ve completed the zone’s quests.

“It should feel like an essential piece of your gameplay, both at leveling and max level,” he said. For example, “the biggest change to professions that I can remember is here, in the garrison.”

The last page of this story has all the bonuses players get for all garrison buildings. Stockton said these are the five reasons why you should care: 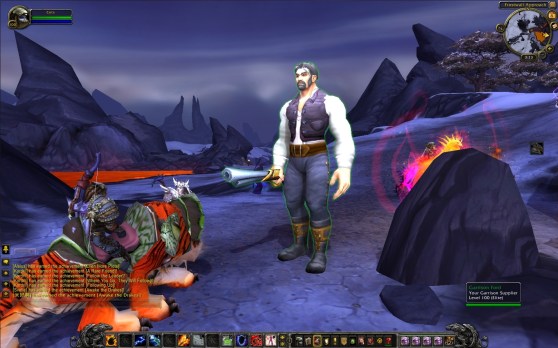 Above: During the Warlords of Draenor beta test, players could instantly increase the level of their garrison and its buildings by talking with Garrison Ford, a beta-only NPC. “You want a garrison,” he’d say. “I know.”

“We have talked for a number of years about having people have more than two professions,” Stockton said. Currently, Warcraft players must choose two main professions — such as tailoring, mining, or enchanting – and have access to all the minor professions: fishing, cooking, first aid, and archaeology.

Players have complained over the years that some other MMO games permit them two primary crafting professions plus a gathering profession (such as collecting herbs or mining for ore) that would support those roles. In Warcraft, mining and herbalism are primary professions.

The garrison offers Blizzard’s compromise: Garrisons have three small-sized plots for profession buildings, and each has its own structure. If the player has that profession, it offers them some perks (more on that in a bit).

But even if they don’t, it’ll still offer them the capability to make that gear or those items. Take a nonengineer who chooses to construct the engineering building, for example. 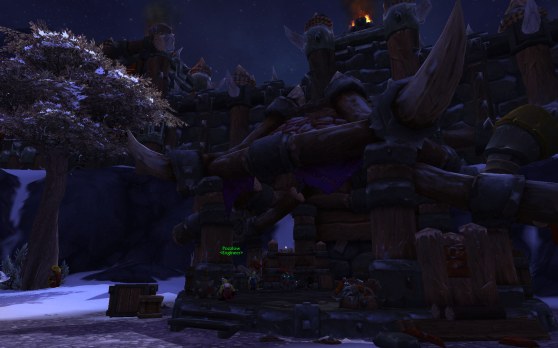 Above: This is the Engineering Works, the small Horde professions building for engineering. It can be built on a small plot in your garrison.

“The non-crafter now can choose to build the engineering building on that third slot and would be granted access to almost everything that engineering does, but not the very best recipes,” Stockton said. You’ll provide the parts, and the NPC running the building will make you the item. So you might be able to craft some of the toys the engineering profession is famous for in Warcraft, but they might not last as long or have top-shelf statistics, he said.

Consumable supplies that characters use in game will continue to only be crafted by players whose characters actually hold that profession, Stockton said.

In addition, the mine and the herb garden are available in all garrisons after you open them up with a quest, and these do not require a profession to harvest. They will offer your character a small amount of ore and herbs daily — it’s not as much as you would get if you had mining or herbalism as a primary profession, but it’s a significant amount.

For example, “with minimal work, you’d be able to do about a third of what a typical miner could do in the same time,” Stockton said. It’s probably not enough for you to easily raise your skill in a crafting profession, but it’s enough to handle the daily quests that most crafting professions have (for those familiar with the current expansion, it’s similar to how the Halfhill Farm area operates.) 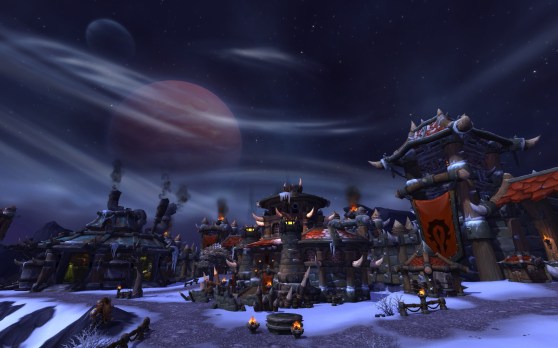 Above: You can invite group members to come visit your garrison. Horde players have their garrisons in Frostfire Ridge, like this one.

You can offer garrison benefits, including portals, to your groups

The truly high-level perks of your garrison — portals that let you instantly teleport all over the Draenor game world, for example — require some serious farming of materials or long-term quest lines. So it makes sense that, at least to start, everyone won’t have everything in their personal towns.

The good news is that not everyone in your group or your guild of players needs to build up these capabilities right away. As a small or large group leader, you can invite everyone in the group to your garrison, and they can travel there by right-clicking their portrait and choosing the option from the drop-down menu.