Nvidia is launching its next-generation graphics chips for PCs today in an attempt to raise the bar for quality 3D graphics in computer games. The code-named Maxwell chips represent the top-of-the-line graphics processing units (GPUs), and will be sold under the Nvidia GeForce GTX 980 and 970 brand names.

The new GPUs are aimed at addressing the trade-off that players of games such as Call of Duty find: They must either emphasize speed of gameplay or quality of graphics. The Maxwell chips have features that allow them to deliver both. Nvidia bills the GeForce GTX 980 and 970 as the world’s most advanced GPUs 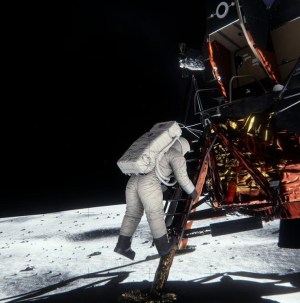 The company is showing off the quality of the graphics with an accurate reproduction of the moon landing by astronaut Buzz Aldrin in 1969. Conspiracy theorists have argued that a photo that Neil Armstrong took of Aldrin was fake because he should be obscured by shadows, based on the angle of the sun. But Nvidia’s graphics experts say they have correctly simulated the environment and found that the moon dust reflects light that illuminates Aldrin.

Santa Clara, Calif.-based Nvidia is showing off the graphics technology at a fan event dubbed Game24 in New York this evening, and it is also holding simultaneous events in other cities around the world.

The new features include dynamic super resolution, which renders a game in 4K in the background and outputs it to whatever quality can be displayed on your device, such as 1080p, or high-definition TV. The resulting image is better than directly rendering an image to 1080p. The chips also have multiframe antialiasing, which smooths out the “jaggies,” or the jagged lines on curved surfaces that make images seem obviously computer-generated. Nvidia says that the new antialiasing works as good as 4X antialiasing, but doesn’t consumer as much processing power.

The “voxel” technology — dubbed Voxel Global Illumination (VXGI) — in the chips also allows developers to create better lighting for complex scenes with lots of movement, lighting, and shadows. You can, for instance, place a hanging light in a game scene. If an object hits the light and makes it swing back and forth, it will cast accurate moving lights and shadows throughout the room. Nvidia says it will enable developers to create environments with natural lighting and breathtaking realism. (See the analysis of the tech by graphics expert Jon Peddie here).

Yet even with these features, Maxwell chips have twice the energy efficiency of the previous generation.

A successor to Kepler (the name for the previous generation of chips), Maxwell is a new architecture that Nvidia will use across a whole family of products. Its first chips are aimed at the high-end, but future products will likely address other segments.

“Maxwell has been years in the making, inspired by our gamers, and created by the best minds in 3D graphics,” said Jen-Hsun Huang, NVIDIA’s co-founder and chief executive, in a statement. “Its extraordinary performance, efficiency, and technologies will empower developers to do their finest work and delight gamers worldwide.”

“We’ve been on a journey for more dynamic and realistic lighting in the game industry, and VXGI is the next big step in that journey,” said Halldor Fannar, chief technology officer of CCP Games, maker of Eve Online. “By offering real-time, dynamic indirect lighting, VXGI is a generational leap forward.”

The chips are also designed to deliver images for virtual reality headsets with better quality pictures that render more quickly for both eyes. 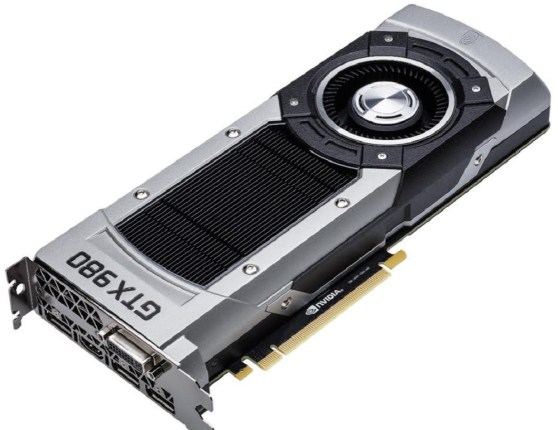 “We built Unreal Engine 4 using NVIDIA’s Kepler architecture but the GTX 980 and 970 GPUs,based on the new Maxwell architecture, are the most powerful, efficient GPUs for creating scenes of unprecedented detail across PC and VR experiences right now,” said Tim Sweeney, founder and CEO at Epic Games, in a statement. “Our developers are pushing the graphical high end with Maxwell GPUs.”

The chips are available now from a variety of a add-in card suppliers, including ASUS, Colorful, EVGA, Gainward, Galaxy, Gigabyte, Innovision 3D, MSI, Palit, PNY and Zotac. Pricing is expected to start at $549 for the GTX 980 and $329 for the GTX 970.

Patrick Moorhead, an analyst with Moor Insights & Strategy, said, “Nvidia’s GTX 980 and 970 excel on two axis, performance and power, which ultimately leads to a better PC gaming experience. What I like most is that Nvidia has offered two features which, in effect, gives the games 4X AA for the price of 2X AA at 1080p resolution. That’s huge, especially given the game doesn’t need any special tuning or drivers for it and gamer will see benefits at 1080p on even today’s games. That could have an unintended, positive consequence, essentially bringing more gamers into that $599 graphics card market.”

He added, “I saw VXGI in action live and it was stunning. That technology essentially gives you real-time global illumination and lighting without having the developer force it, scene by scene, which simplifies development and, of course, increases realism. PC gaming is alive and well with Maxwell.”