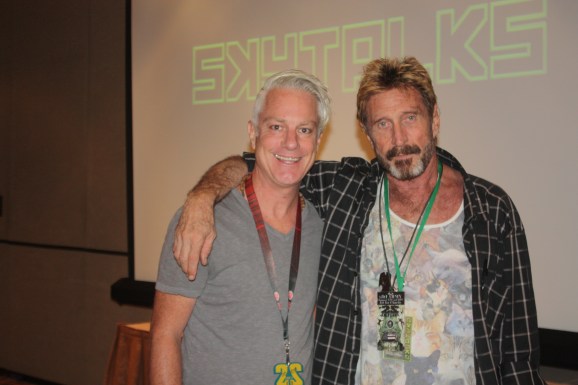 At the Defcon security conference in Las Vegas in early August, I waited in line with my esteemed colleague Dean Takahashi for 40 minutes in order to get our pictures taken with perhaps the most unabashed instigator in the history of technology.

McAfee, of course, is the security software legend who founded McAffee, Inc.

For nearly a month I had been reaching out to McAfee in order to score an interview about his latest security startup, Brownlist. Brownlist, which aims to help the little guy battle big government, was unveiled at Defcon to a packed house of nearly 700 people who were hanging on McAfee’s every word.

McAfee and I exchanged digits and posed for the picture. And he promised to be in touch. But he never emailed. Or called. Weeks passed. I began to lose interest.

Meanwhile, McAfee had been on CNN, Bloomberg, and other channels, railing about technology and how he would once again change the paradigm.

But then I received a curious email, classic McAfee, and from a Gmail account. In it he suggested we have coffee the next time he was in California. That would be in October, when he said he’d be speaking at a conference he declined to name.

I was stunned when I read the rest:

“Richard, I feel positively terrible about my repeated refusals to grant you an interview, but the voices in my head have been so loud recently that I have been thrown out of restaurants and coffee shops because they have drowned out the conversations of the people sitting close to me. I was afraid that your questions, and my answers, would be completely washed away by these raucous voices. However they have calmed down tremendously in the past few months and they now speak quietly, and mostly about the carnivorous aliens that incessantly follow me and about the Hungarian elves that, not infrequently, steal my shoes. I feel that a journalist of your stature and experience should be able to navigate these mild distractions with ease. Therefore I would like to place whatever time, resources, talents, and other assets that I might posses at your disposal so that I might rectify this unintended slight to your person.

And there you have it. After reading the email (and picking my jaw up off the floor), I called McAfee, who is hiding out in the wilds of America, and asked if I could republish it. He told me to go ahead.