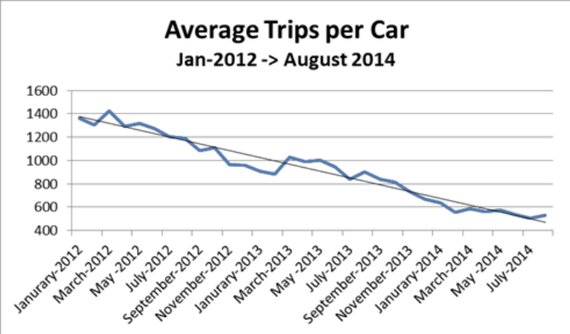 The taxi business has taken a massive hit thanks to the extraordinary rise in ride-sharing services. A new report from the San Francisco Metropolitan Transportation Agency finds that since 2012, the average number of trips per taxi has plunged from 1,424 a month in March 2012 to 504 in July 2014 — a 65 percent drop.

The report underscores how fast consumers will take advantage of better options once they are available. A recent study from UC Berkeley found that during the evening rush hour, 92 percent of ride-sharing services such as UberX and Lyft arrived in under 10 minutes, while just 16 percent of taxis did so. Thirty seven percent of taxis took longer than 20 minutes.

The same study found that 39 percent of ride-sharing users would have taken a taxi had Uber or Lyft not been available.

Rather than trying to out-innovate their new competition, taxi groups have pressured the state government to impose paralyzing regulations. While Lyft, Uber, and Sidecar all recently added a feature whereby drivers can pick up passangers on their way to a destination, just this week, the California Public Utilities Commission deemed this new carpooling feature illegal. (Lyft has vowed to continue the service, despite the legal threats.)

We can expect more of this type of political infighting between taxi groups and ride-sharing startups. But if the graph is any indication, consumers have already chosen a winner.

You can read the entire report here.