The voice blares over the loudspeaker, begging me to quit fooling around and to get back to saving the world. A little grudgingly, I quit randomly punching bad guys in the space dock with giant treelike fists erupting from the floor and sprint off to find the power cores that need throwing to make a ship explode.

I’m playing Groot in one of the missions of Disney Infinity 2.0, the toy/game hybrid from Disney Interactive.

This installment is Marvel-themed, and in this Guardians of the Galaxy playset, my play partner called first dibs on Rocket Raccoon. But instead of blasting the bad guys, she’s summoning a neverending series of hovercars and driving them off very tall things. It’s not ending well. 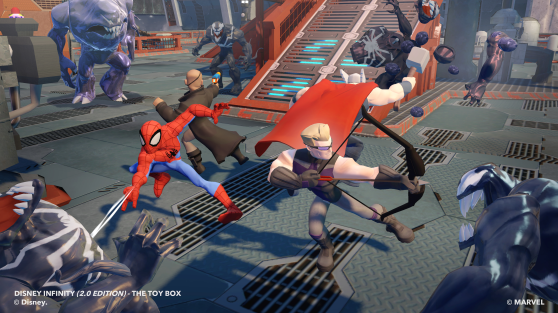 Above: A little crossover action: Hawkeye gets comfy with Nick Fury, Thor, and Spider-Man.

The $75 core game includes The Avengers “playset” (world to play in) and three figures. The Spider-Man and Guardians of the Galaxy playset are $35 each and include two figures, and other figures are sold separately. Disney Infinity 2.0, developed by Avalanche Software and published by Disney Interactive, releases on Sept. 23 for PlayStation 4, PlayStation 3, Xbox One, Xbox 360, Wii U, PC, and iOS. I reviewed the PlayStation 4 version.

Disney Infinity 2.0 helps you toy with the Marvel universe — and like all good tie-in merchandise, the more you spend, the better it gets. 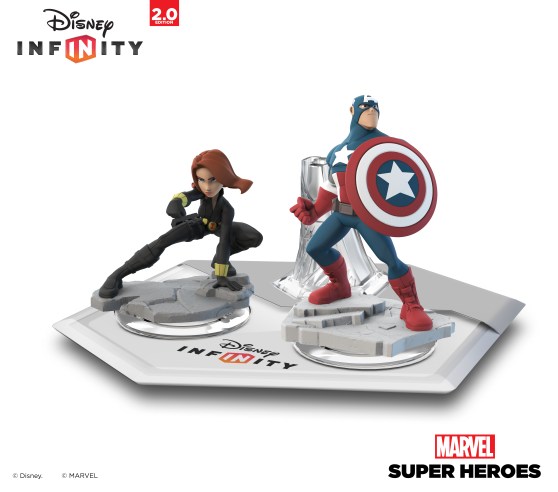 Above: Figures are high quality, the translucent Play Set pieces are pretty, and the base they rest on is attractive and sturdy.

This truly is a high-class toy box

The concept behind Disney Infinity is simple: You plug a flat base into your game console, set a figure on top that represents a world to play in, add a couple of characters to play with, and voilà: instant story.

The figures trigger those characters inside the game. If you kill them by repeatedly doing silly things (as we did), you can revive each other, start over, or pop new figures on the board (as we did).

You play through a series of quests in those figure’s game world, or take them to the Toy Box, where you can play pre-programmed mini-games or build your own.

The Play Set pieces that represent the game worlds are translucent and attractive, and the ones for the characters would look at home on your office shelf, not just a kid’s console. When you pop the figures on the base, the glow uplights them – a nice touch.

Even if you stop playing the game, you might want to keep these figures around. They feel good in the hand, and are just a little cartoony without being completely goofy.

Nobody can accuse the Mouse House of skimping on the production values for this game’s major assets: The voice acting is extremely high quality, the dialogue is frequently funny, the music is typical Disney loveliness, and while the look and feel of the game worlds aren’t identical to the movies, it evokes the feeling of those places.

The storylines the quests and missions follow are right in keeping with the worlds where they’re located. Marvel comic author Brian Michael Bendis did the writing.

The original Infinity came with three worlds right in the box compared with Infinity 2.0’s one (the Avengers playset). But the size of Infinity 2.0’s levels is much larger. 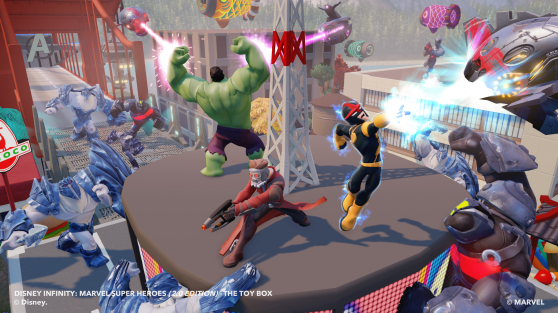 Above: Each hero’s abilities makes them feel unique to play.

The characters are more customized

Characters this time around can level up during missions and combat and spend points on a skill tree, which offers some pretty entertaining abilities at fairly low levels.

Characters cap at level 20, and you won’t have enough points to spend on every skill, so you’ll have to think about what you’ll take and what you won’t. The system seems largely random, though; while you must take some skills to get at others, you follow no real trees here – it’s more like Groot’s meandering roots than any real structure.

That’s all right; what the system does is help to make each character feel unique, as many of their special moves aren’t duplicated by the others, and give you the sense that you’re customizing your virtual friend. Some fly; some (guess who?) crawl the walls; others take the elevator or double-jump their way up pipes, turning levels into pseudo-platformers.

You can also collect crossover coins that will allow a figure or two from one play set to wander in another’s world – another nice touch that adds some freedom to your gameplay, compared to the first installment. 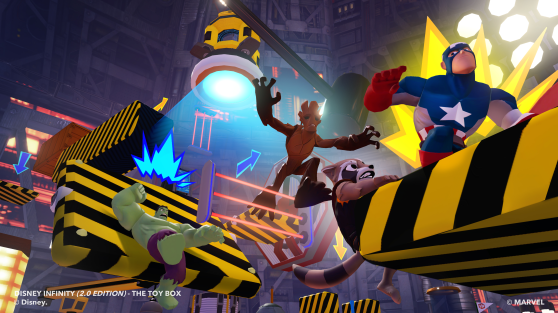 Above: The Toy Box offers premade adventures and build-it-yourself gameplay.

The Toy Box: Do it yourself or have the game do it for you

The Toy Box is an area of mini-games you can play that unlock more in-game toys, using any superhero figure you own. You’ll find plenty to do here even if you never touch the game’s build-your-own features –- the little mini-map is a cluster of quest exclamation points when you arrive.

You can stick with the premade races and challenges, or you can build your own platformer-type challenges, cities, and even room interior designs. It gives both players who want complete control and players who just want to dink around in the game world a chance to experience what they want. 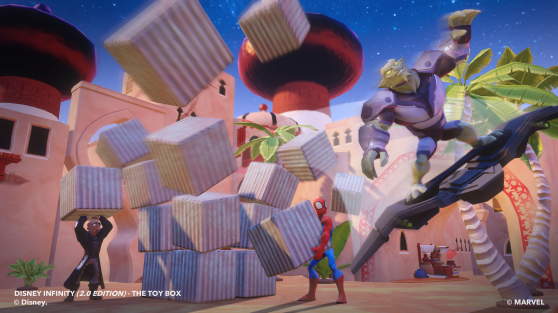 Multiplayer is a hoot

Disney Infinity 2.0 is directed at younger audiences (it’s rated E10+ for cartoon violence and its online play), but it’s not annoying to parents. I played with a 13-year-old, who felt perhaps a couple of years older than the target audience.

Local multiplayer is split screen, which is a little unfortunate, but it still opens up huge opportunities for fun gameplay. Disney, Marvel, and Pixar characters are everywhere; the driving mini-game in the Toy Box features the cast of Cars, for example.

We spent the first 10 minutes after we got the game out of the box just tackling each other to throw each others’ characters off ledges to their deaths (you can pick each other up in-game, and neither of us was terribly fast on the trigger to get down again).

It was so fun that we eventually carved our health bars – even after resurrecting each other – to bare slivers, and we finally gave up and popped in new figures to start anew. Uh, sorry, superheroes.