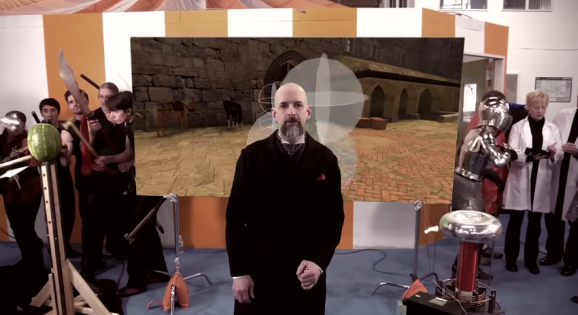 Kickstarter is a risky business, and another high-profile project on the crowdfunding site is now officially dead.

In a lengthy Kickstarter update post, science-fiction author Neal Stephenson explained that his historically realistic motion-controlled swordfighting game, Clang, is no more. This is despite raising over half a million dollars from more than 9,000 backers, many of whom are now pretty angry.

“A year has passed since the last update, and I’ve decided that it’s cleaner and simpler to cut the cord and announce the termination of Clang,” said Stephenson, winner of the Hugo award for best science-fiction novel with Diamond Age in 1996.

Stephenson ran out of money to fund Clang back in September 2013, and he described it as an “evenings and weekends” project until he secured further funding. He asked Kickstarter backers to “be patient” at the time. A year later, though, and he’s killed the project completely, leaving many backers wondering where they stand.

Stephenson said that he’s refunded about $700 of the $526,125 of Kickstarter funding. “By combing through comment threads and emails we have identified around two dozen Clang backers who have asked for refunds,” he said. “Those have already been processed; those people have their money back.”

Stephenson’s final Clang update makes no mention of refunding other backers, instead pointing them to a mailing list which will announce future projects.

“It is possible that these projects will one day yield bonus rewards for Clang backers,” said Stephenson, “but no guarantees can be made on that front since these projects are just getting off the ground.”

Stephenson said that he and other members of the team had absorbed financial losses from the failed project, but this will be small solace to backers who pledged amounts ranging from $10 to $10,000 on Kickstarter.

“Members of the team made large personal contributions of time and money to the project before, during, and after the Kickstarter phase,” he said. “Some members, when all is said and done, absorbed significant financial losses. I am one of them; that has been my way of taking responsibility for this.”

Backers looking for refunds will need to take note of Kickstarter’s terms, which don’t offer protection for a project that doesn’t make it: “Kickstarter does not guarantee projects or investigate a creator’s ability to complete their project.”

However, before they launch on Kickstarter, all creators agree that failure to fulfill backer rewards may result in legal action. Kickstarter says that this information “can serve as a basis for legal recourse if a creator doesn’t fulfill their promises,” but adds: “We hope that backers will consider using this provision only in cases where they feel that a creator has not made a good faith effort to complete the project and fulfill.”

Above: All Kickstarter creators agree to this statement before launch.

What Clang backers do next will be interesting to see. Many of those who were eligible for a “copy of the game” at the $25 funding tier are unhappy with the Clang demo sent out by Stephenson in April 2013 — a demo which one backer described as “essentially unplayable.”

Clang backer Dean Smith wrote on Kickstarter: “After receiving the Project Update #43 email, I would like to request a refund. In good faith, I was happy to wait for a concrete release rather than a technical demo. I am very disappointed to realise that nothing further will be done, and would like my funds returned.”

Another supporter, Bill Thomas, said he’d contributed $75 but had not received his rewards: “I’m a $75 backer. I’ve received neither T-shirt nor manual; now the game development has been officially abandoned — refund please.”

Stephenson, though, says he’s already made good on the backer rewards: “Last year, Subutai Corporation delivered the Clang prototype and the other donor rewards as promised.”

Watch this space, I guess.