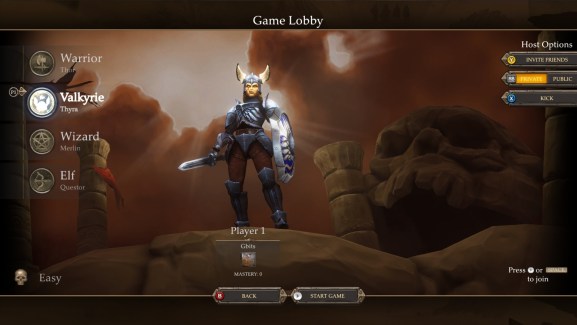 You have a choice between four characters (with no customization) in Gauntlet.

The moment a colleague told me he felt the new Gauntlet was “soulless,” I knew we had a failure to communicate.

We were each playing through a preview of Arrowhead Game Studios/Warner Bros.’ new PC release of Gauntlet, due out Sept. 23 for $20. After a few hours of play, I was chugging along on my elf with fond thoughts of the original 1985 arcade game.

Comparably (and not surprisingly), this version is a heck of a lot prettier, more responsive, more nuanced, and more fun. Amazing what 30 years of tech can do, I thought. This version of Gauntlet looks like a cross between the original in high-res and Diablo III.

I was busy enjoying Gauntlet’s graphic upgrades (shadows move fluidly from torches’ flames), throwback gameplay (you can still shoot the food before your  injured comrades get to it — classic Gauntlet “co-op”), minigames that earn you achievements (how many zombies can you round up in a big herd and bomb all at once?), and classic unkillable enemies (Death lives).

My colleague was comparing it to current A-list titles, which include modern additions like, you know, story and dialogue and drama, and he found it wanting. Pfft. 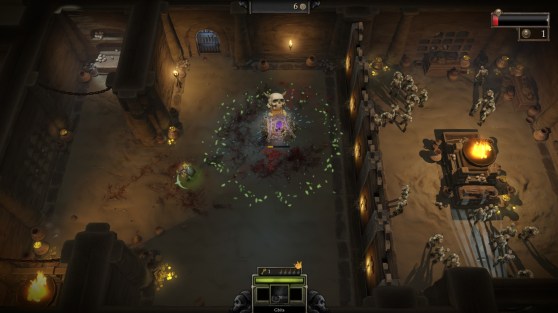 Above: Gauntlet’s elf + his bomb + a pile of zombies + a monster generator = Boom!

Gauntlet as it existed almost 30 years ago would be a good mobile/casual game today: something you could pick up and put down quickly, born from its roots as a quarter-at-a-time arcade game.

Sadly, it’s not enough now to just replicate that experience, even with a modern look, unless you’re aiming for the mobile market. And this game doesn’t. It’s clearly designed for, well, if not its actual PC platform, then the consoles that it’s not available on.

(Hint: If you plan to play it, either invest in a gamepad or plug your Xbox/PlayStation controller into your PC. I played five minutes on a keyboard before switching back with a shudder. WASD keys to move and the mouse to aim, versus one joystick to shoot and the other to strafe … there’s no comparison.)

Updated gameplay is still so familiar 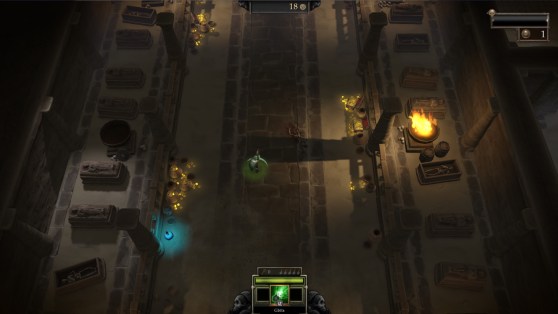 Above: Just look at those gorgeous moving shadows, the flame effects, all that gold…

This version of Gauntlet sticks closer to the original arcade model than the reboots that have come over the years.

The gameplay is incredibly similar to the original, if developers made the original with 2014 graphics and tech. There are some nice additions — masteries unlock bonuses for your characters based on achievements you earn in-game, for instance — but for the most part, it’s the same kind of whack, eat, loot you remember. (If you don’t remember, go ask your parents. I’ll wait.)

You have a choice of four characters (and only four), each with their own abilities: the elf, a great choice for mindless shooting due to the ranged attack and bombs; the wizard, a better choice for players who are strategic throwers of long-cast-time nukes; the valkyrie with her shield for throwing and hiding behind; and the warrior with his slashing, spinning melee attacks.

You can earn different armor and relics, which you activate with potions for dramatic effects. No more using potions to kill Death in the game’s chase levels; all you can do is run, baby, run — as it should be.

But if you go looking for the things we expect from 2014 games, you might come up short. Gauntlet’s design appears simple, straightforward and relatively shallow: the perfect game for 1985.