The Jolt Sensor is a small device that lives on an athlete’s helmet, headband, or goggles. It’s white and discrete, and it hooks up via Bluetooth to smartphones. This smart head protectant is sensitive enough that it can detect when a concussion may have occurred based on the wearer’s head’s acceleration rate. When such an injury has been sustained, it sends a signal to a parent or coach alerting them to the player’s condition. Jolt runs on a multi-week battery and can be recharged using a USB cord.

While Jolt Sensor has not reached its goal yet, at two-thirds of the way there, it has support from hundreds of backers along with a Kickstarter Staff Pick designation. Any way that athletes can be safer is always welcome. Many are pressured to push through their injuries in the name of the game, so it’s great that Jolt Sensor has found a way to support an athlete’s claim that they may be seriously hurt. The only apparent drawback of the Jolt Sensor is that, if fallen directly upon, it may break or push a dent into the wearer’s head. Still, the idea that concussions can be detected early and treated is a welcome concept for members of any sports team.

AnyMote Home is designed to take the core idea of a universal remote, eliminating the need for multiple confusing and similar remote controls, and pair it with modern technological perks. AnyMote Home is a simple Bluetooth LE hub that takes phone or tablet inputs and converts them into IR signals that can control almost any device, with thousands of devices supported already and updates constantly rolling out.

With over a thousand backers, this universal remote with a twist has already doubled its campaign goal. AnyMote definitely has a strong degree of adoption possibility because of the way that it combines home automation with the familiar button layouts of existing remotes on a touch screen device. Still, the universal remote never found favor beyond the technologically challenged for the lack of precise control and features. If AnyMote doesn’t offer complete 1:1 remote simulation, there will always be a need for the familiar feel of the plastic wand that makes the entertainment magic of the living room a possibility. However, AnyMote supports over 800,000 remotes (and is already up on Google Play, meaning that some customers are already accustomed to using the AnyMote system), and the Home hub will just make it even more convenient. 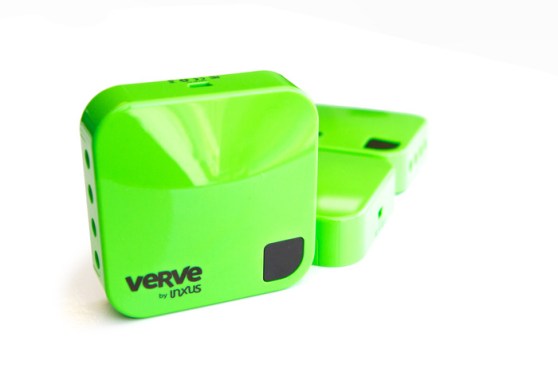 VERVE2 is an easily programmable, highly customizable family of sensors that allow users to give any item a degree of online functionality. Detecting touch, light, heat, or motion, VERVE2 can be clipped or affixed to anything and then programmed to interact with computer programs or webites to create new and exciting functions.

VERVE2 is not sweating anything. With over a week to go, it’s doubled its goal and has captured the imagination of hundreds of backers. Just by how easy the VERVE2 system is to set up and tweak to accomplish different tasks, it’s an incredible way to bring the power of connecting objects to the Internet to even average end users. That being said, from a practicality standpoint, the system may not be as flexible as promised, offering a lot of options to use, but not a lot of outstanding features that would be intuitive to many.

The creative and curious will derive a great sense of joy from getting their hands (and fingers, and voices, and lights) on VERVE2, but for the person who just wants something they can plug in and use to make their lives easier, VERVE2 might not be the right buy. However, being able to turn any object into computer input is what makes VERVE2 an exciting alternative.