The move put an end to a three-year-long saga over the ownership of the company, which involved financial interests, personal disputes, international lawsuits, and political pressures.

Here’s how it played out.

The “utopia” of a “trash holding”

When Mail.ru Group went public on the London Stock Exchange in October 2010, the fact that it did not control Vkontakte was regarded as a weak point.

The Mail.ru Group, which already fully owned the two other leading Russian social networks Odnoklassniki and Moi Mir, started expressing an interest in taking control of Vkontakte in early 2011.

“We currently own 32.49 percent as well as an option on 7.5 percent. It would be strategically correct for us to take control of the social network or, even better, to acquire all its shares,” the group’s CEO Dmitry Grishin stated at that time.

“We rule out, and consider to be utopian, the full integration of Vkontakte into Mail.ru Group,” replied Pavel Durov, Vkontakte’s general manager and minority shareholder at that time, in an open letter.

In July 2011, nevertheless, Mail.ru Group, exercised its option to raise its stake in Vkontakte.ru from 32.49 percent to 39.99 percent. The transaction valued the company at $1.5 billion.

Responding to the move on his Twitter account, the independent-minded Durov referred to Mail.ru Group as a “trash holding.” 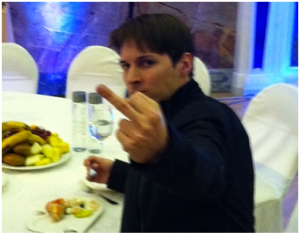 Above: The “official answer” of Vkontakte founder Pavel Durov to Mail.ru Group’s acquisition “utopia” in 2011.

The message was accompanied by a disrespectful photo of Durov’s “official answer to Mail.ru Group’s last attempt to absorb Vkontakte.”

Durov also condemned Mail.ru’s file hosting service, files.mail.ru, as “a tasteless warehouse of viruses and warez,” and accused the group of “massive bribery.”

In late 2012, Mail.ru Group’s main shareholder Alisher Usmanov – who had kept a relatively peaceful relationship with Durov – said he was still willing to increase his group’s stake in the social network. “We’ll [soon] reach our goals,” the billionaire said.

“Dubious acquisition” and accusations of pathology

While opposition-minded observers saw in the move an attempt to increase the Kremlin’s control over the Russian Internet, UCP claimed it had “purely financial” motivations.

The transaction was put in doubt, however, by Durov and Mail.ru Group. UCP appeared to have acquired legal entities that controlled 48 percent of Vkontakte – not shares in Vkontakte directly. This “dubious scheme,” as a Mail.ru Group spokesman put it, allowed the sellers to get around their obligation to first offer their stakes to existing shareholders.

In a concerted effort, Durov and Mail.ru group went to court in April 2014 in a bid to return the litigated 48 percent to what they claimed were the true shareholders.

In addition, Durov threatened to sue the UCP for defamation, following statements made by UCP partner Yuri Kachuro. The latter had publicly accused VK’s CEO of “spending most of his time on personal projects” and of being “pathologically unable to respect agreements and rules of conduct.”

On its side, UCP filed a lawsuit in the British Virgin Islands against Durov and Mail.ru Group, in order “to protect its economic rights following the launch of Telegram” — an instant messaging application launched by Durov in 2013 outside of Vkontakte.

Durov’s initiative entailed potential conflicts of interest, according to UCP, which saw Telegram as a VK competitor and claimed ownership over the application.

A happy end for all the parties

Mail.ru’s acquisition of UCP’s stake brought all that to an end.

Simultaneously with Mail.ru Group’s acquisition of UCP’s stake, the parties announced last week that the outstanding litigation and claims concerning VK and related matters between UCP, Mail.ru Group and Durov, will be dropped immediately.

“All the parties have achieved their respective goals: Mail.ru Group will consolidate 100 percent in VK; Durov will be able to fully control and develop Telegram; and UCP as a financial investor is quite pleased with the return on investment,” said Nafisa Nasyrova of the UCP’s press service in an exchange with East-West Digital News.

She however could not disclose the acquisition price in last year’s transaction.

Durov — who lost his minority stake in late 2013 and was dismissed as CEO in April 2014, claiming to be the victim of political pressures — also seems quite satisfied.

“I welcome the decision of my former partners to abandon their claims towards Telegram and to transfer the American entities under my control. For my part, I acknowledge the dismissal of claims against UCP and congratulate all parties involved on the settlement,” Durov stated.

No Durov comeback to Vkontakte is to be expected.

“He is not in the country, and is running his own projects. No new role for him in VK has been discussed,” Kseniya Chabanenko of the Mail.ru Group’s press service told East-West Digital News.