Where you live is not simply your home. It’s a sensing, universally controllable system for your life.

Two new sets of products — from startup Notion and veteran peripheral maker Logitech — point to new directions for both the sensing side and the control side of what I’d call your Home-as-a-Platform (HaaP). Although the new products have no direct connection, both companies are pledging to work with everything else out there for the automated home.

Notion’s devices — developed at the Techstars accelerator in Boulder, Colorado — are prepared to add remote sensing to virtually anything in your home with a surface.

CEO Brett Jurgens and chief technical officer Ryan Margoles (both are co-founders), along with some others, started work on their product a year ago. They initially raised “just under $500,000” in a seed round, and funding from their current Kickstarter campaign — already twice their initial goal of $50,000 with more than three weeks to go — goes toward manufacturing their product.

“Our plan is to play well with [other devices],” Jurgens told VentureBeat.

In fact, Notion already has its place in the home picked out — fourth place. In Notion’s ideal home, there would be an automated thermostat from Google-owned Nest, one or more video cameras from Google-owned Dropcam, Kwikset connected door locks, and then Notion devices all over.

“With our product,” he said, “you don’t have to replace anything.”

A round and flat Notion sensing device, looking like an oversized pill, can attach to a door, window, dishwasher, or sit inside a refrigerator, among other locations. It is a sensor wonderland, able to detect water leaks, acceleration (as in an opening door), direction, temperature, sound — even, via a piezoelectric transducer, how much gas is left in your propane tank.

It can not only detect if your (ordinary, non-Nest) smoke alarm has gone off, but, due to differences in the audio alarm, can tell if the alarm is signaling a smoke emergency or simply beeping that it needs a new battery.

Notion has also suggested such use cases as being able to remotely know when someone opens your liquor cabinet or your gun safe — although hopefully not both at the same time.

The Denver-based company envisions a dozen or more multi-sensor devices monitoring your home, all talking via Bluetooth and Wi-Fi to a central hub that communicates with their cloud and then back down to your smartphone app or computer.

You can see on your app if your monitored back door has been opened and, because Notion knows the smartphone IDs of the home’s occupants, you know if the person opening the door was your smartphone-carrying daughter or someone unauthorized.

You can label each multisensor device in your iOS or Android app from a dropdown menu, so that the sensor knows what it’s supposed to be looking for if it’s mounted on a door. The startup is also integrating weather information, so you can be bothered at work when you leave a window open and the forecast is for rain.

A Notion hub can manage up to approximately 1,200 multisensor devices, and Notion said that “an unlimited number of hubs” can talk to one dashboard. Unless you’re the Koch brothers, those numbers probably exceed the number of windows, doors and refrigerators in your home, but Notion anticipates that businesses will also use this system.

A beta test is scheduled for April of next year, with a full release in July. A starter kit, with three sensors and a hub, will go for $200. Additional sensors will most likely be in three-packs for $100.

Competitors, Jurgen told us, include “overlap” from larger home automation systems like Honeywell, other sensors like the Quirky , and do-it-yourself security devices from iSmartAlarm or SimpliSafe. But, he said, Notion’s multiple sensors offer several times the capabilities of those products.

“We’ve combined all those devices,” he said, into smaller devices with longer battery lives.

While Notion is looking to add sensors throughout your HaaP, Logitech is focusing on the other end of your home’s system — an über-manager that goes beyond its traditional product of controllers for entertainment systems and looks to be the device in charge of your house. This week, it expanded its emerging line of home-automation products.

Its central Harmony Home Hub can talk to other devices around the home via infrared, radio frequency, Bluetooth, or Wi-Fi — more than a quarter million compatible devices, now increased by another 11,000. The Logitech hub can be controlled by a smartphone/tablet app or the new $150 Harmony Home Control remote. 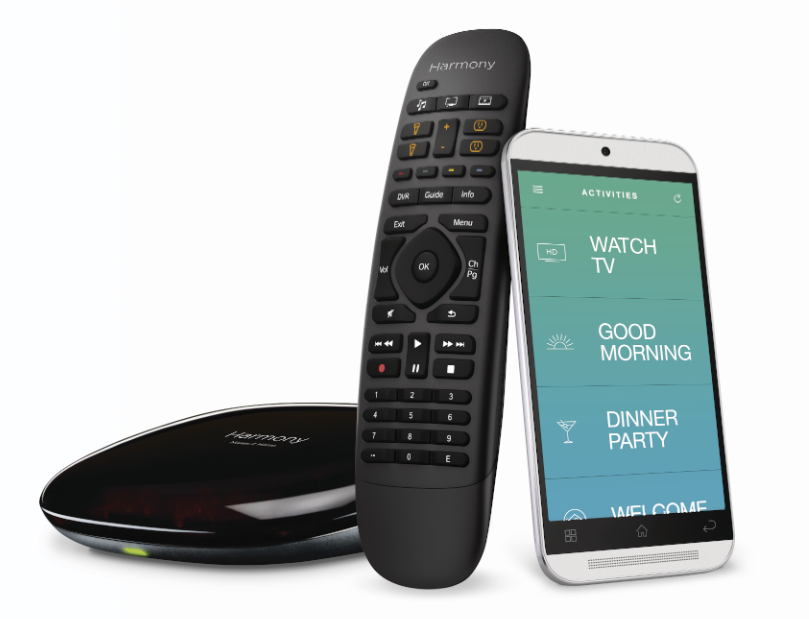 Above: The Logitech home control set

“Our No. 1 value proposition has been to wipe out six remotes with one,” Logitech senior director of product marketing Chad Thompson told us. “We want to do for home automation what we did for the universal remote,” which is now used in millions of home to centrally control entertainment systems.

And the collected data?

“We’re the guys putting [the automated home] together as an experience,” he said, the orchestra leader among the Nests, Honeywells, Phillips, and Notions.

Thompson told us about some of the experiences he has preset in his home with a Logitech controller and cooperating home-automation products. At wine time in his house, for instance, “the music [automatically] comes on, lights [dim to] a certain cue — it’s smoky and kind of like a restaurant.”

In addition to transforming your home, those sensors and controllers are also collecting a helluva lot of data about how you live your life.

HaaP companies will be able to know, for example, exactly which equipment you use in your entertainment system, if you have a dishwasher, how many times you’ve had unauthorized entries and, possibly at some point, how often you need milk. (When asked, Notion said its sensors, although sound-sensitive, can only listen to thresholds of sounds and not conversations.)

Notion said it will give people access to their own data, and will never sell personally identifiable or anonymous individual data. It said it was still deciding about anonymous, aggregate data.

Which is good to know from both companies, given that their army of sensors and the commanding controller will know more about our homes than we will.