For almost a year, a startup called BetterWorks has been quietly crafting a web-based service big companies can use to store employees’ goals and measure their progress. Today BetterWorks is finally showing the app to the world.

And the startup is also announcing a $15 million round of funding from big-name investors that it took on last year but never talked about. John Doerr and Bing Gordon of Kleiner Perkins Caulfield & Byers led the round. Joe Lonsdale from Formation 8 also participated.

The inspiration for BetterWorks came when Kris Duggan, its chief executive and a co-founder, was leading Badgeville, the company he started in 2010.

“What we did was we used PowerPoint and Chatter,” Duggan told VentureBeat. “Everybody would upload onto Chatter their slide for the quarter, and I thought it’s crazy that there wasn’t off-the-shelf software that would facilitate this.”

And boom, just like that, Duggan had the idea for his next startup. He found out how people at Google and other companies come up with their goals and what happens after that point, and he walked away with some ideas about what would work for the current generation of workers.

BetterWorks has a mobile app, of course, along with recommendations, a way for colleagues to cheer you on, and the ability to automatically connect multiple people’s goals. Even with its contemporary flair, though, BetterWorks will go up against other large companies with tools for tracking goals, including SAP and Workday. 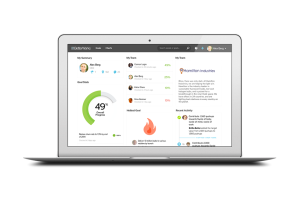 Above: The BetterWorks software.

But those companies push software that encourages a “closed, hierarchical, compensation- and performance-driven process,” Duggan said. BetterWorks, by contrast, seeks to make everyone’s goals accessible and even show how individuals’ goals line up with corporate goals. So business strategy isn’t a mystery, and employees can see how their bosses and even the top executives are doing.

BetterWorks is selling the software to companies with at least 50 users, for $15 per user per month. It’s caught on at around 25 companies, including Bluenose Analytics, CIG, Edmunds, Lumeris, UpWind, and Zynga.

About 30 people work for Palo Alto, Calif.-based BetterWorks. By the end of the year, the startup will approach 50 people, Duggan said.

Going forward, he wants to see the startup become smarter about analyzing the goals people put into BetterWorks. The startup is assembling a data science team to work on such challenges, Duggan said.