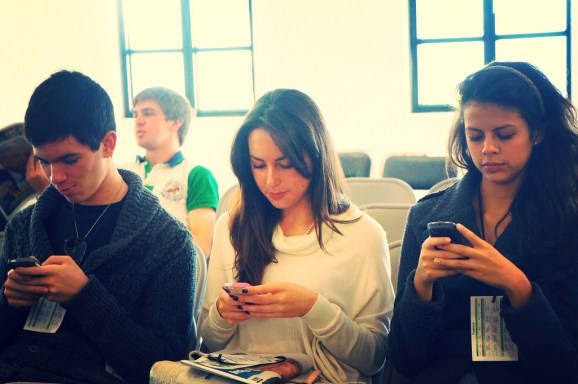 Our shift to mobile might mean a lot of wonderful things, but mobile is still not as easy to organize as the Web is when it comes to linking. The inability to transmit data through the app store means that downloading an app doesn’t take you to a specific or personalized piece of content the way clicking on a web link for a referral does, and that’s a huge problem for companies.

But Branch Metrics, a small company that has just completed StartX’s summer accelerator program, is working to make that possible. And its fresh $3 million in funding could be a sign that it’s onto something.

To understand what Branch Metrics does, imagine you’re using a mobile app and would like to invite a friend through its referral program, which gifts you and your friends additional credits you can use in the app. Right now, your friend would have to download the app and manually enter your personal referral code before the credits are added to both of your accounts. The app would also have the same generic launch page every user sees.

With Branch Metrics, instead of telling your friend which app to download and providing them with your referral code, you’d simply send them a link via text message, email, chat, or whatever else floats your boat — just as you’d send them a web link for a webpage. Once your friend clicks on the link, the app would be downloaded to their phone, the credits automatically added to your accounts, and a personalized launch page, perhaps congratulating them on taking the referral, could even greet them.

Or picture using a fashion shopping app, wanting to show your friend a particular pair of shoes you’re considering buying. Just as you’d send your friend a link to the shoes from the merchant’s website, you could send them a link to that exact pair of shoes inside an app they don’t even have on their phone. The app would immediately download and open up right at that pair shoes — just like a web link would do.

Or, put another way, developers can use Branch Metrics to pass data through installs of their apps.

“We want it to work the way it works on the Web. We wanted apps to work more like websites,” Branch Metrics co-founded and chief executive Alex Austin told me in an interview.

According to Austin, the problem stems from the fact that the Apple app store is structured the same way software bundles were sold in the ’90s. Unfortunately, with the simplicity of many apps and companies putting out multiple apps (Facebook, LinkedIn), deep-linking is becoming more and more important for both companies and users.

Branch Metrics’ team has been working together on another project for more than a year and half now but hit a wall. Its previous business, Kindred Prints, let users order printed books of their photos for $5. Sharing a photo or album from the app with someone else was impossible if they didn’t have the app installed already, which prompted the team to hack a solution.

Branch Metrics uses a mix of mobile deep-linking and the technology used in app install attribution by companies such as HasOffers, Kochava, and Facebook, among others. The latter is what these companies use to “track whether or not there was a successful install,” said Austin.

With Branch Metrics’ lightweight software development kit (SDK), app developers can send, receive, and track data through app installs. And because it ties each user to their referrer, a company can continue to reward referrers for subsequent actions (purchases the referred friends make, and so on).

“Our goal ultimately is to replace every single link that points to an app,” said Austin.

Branch Metrics currently has SDKs for iOS and Android, an API, and an upcoming web SDK that the company says will make its service cross-platform. The web SDK will enable developers to track installs to any mobile platform even if the link comes from the Web, creating a unified tracking system for their apps’ virality.

And that brings us to Branch Metrics’ business model. The SDKs are free for developers to use for the sake of getting it in as many apps as possible, although the company plans on eventually adding paid features such as insights about an app’s users and their behaviors. An app’s K-factor, a measure of virality, could also be an insight the company could provide for a fee as it shows how many new users each user brings in.

Since becoming available in late June, Branch Metrics is already live in about 20 to 25 apps, with another 25 to 30 committed to using its SDKs.

NEA led this round of funding, with additional participation from Mar Hershenson and Pejman Nozad from Pejman Mar Ventures, Ben Narasin from TriplePoint Capital, and other angel investors.

Branch Metrics was founded by Dmitri Gaskin, Mike Molinet, Mada Seghete, and Alex Austin and is based in Palo Alto, Calif.