And here it is, a new iOS 8 update following yesterday’s mess and retraction of iOS 8.0.1.

To update to the new version, iOS 8.0.2, go to your device’s Settings > General > Software Update, and off you go. 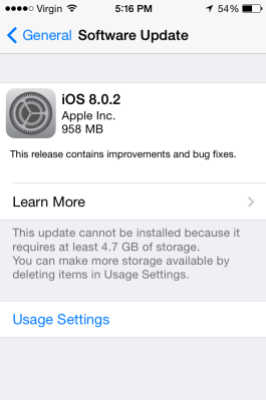 Above: Screen shot of the now available iOS 8.0.2 update.

Apple quickly pulled the update and directed users to revert back to iOS 8.0.0.

Yesterday’s update was intended to fix a first set of bugs the OS encountered after its release, namely problems with HealthKit and third-party keyboards, among others.