You know that person in your social circle that gets frightened whenever the group has a gaming session? When the controller is being passed around, they’re the person that nervously sinks back into the couch trying to disappear between the cushions. By the time the pad makes it to them, they hastily shove it away with a shaky hand, while confessing with a jittery laugh, “I suck at video games. I’ll just watch.”

Fenix Rage for the PC is the sort of game that creates this type of video game-phobe.

Fenix Rage is aggressively retro, but I don’t mean in a visual sense. It’s a step back to when this medium mercilessly threw players to the bitmap wolves, as opposed to today’s hand-holding through exploding amusement park ride-like set pieces.

It’s raw pixel dodging, designed by people who want to rub your scrubby skills in your face. And those bastards at Green lava Studios almost suffocated me to death!

Simple to learn, hellish to master 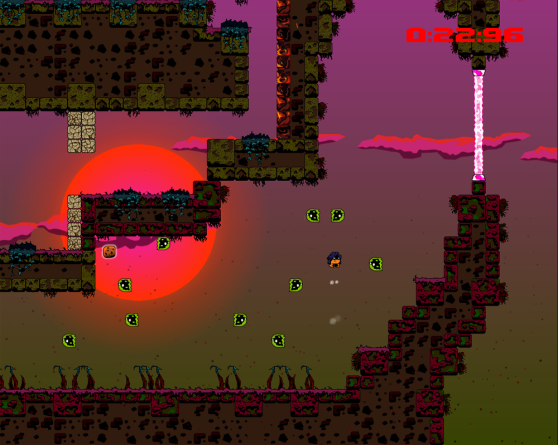 The phrase above isn’t just a game criticism cliche — it’s the golden rule of great play design. And Fenix Rage is the brutal embodiment of this philosophy.

The controls are stupid-simple: Move, dash, and jump. You can cancel both horizontal and vertical actions as much as you want. This makes leaping Flappy Bird-ish in nature, where you can keep floating in a confined air space with timed button presses or can fly up to the highest corners by spamming double jumps.

The goals are even simpler. If you want to go for speed, simply locate the exit portal and get to it as quickly as possible. If completion is more your thing, find the cookie, then get to the portal. These two goals tease both of my gaming OCD tendencies at the same time and enables me to flip-flop which one I want to go for on the fly. 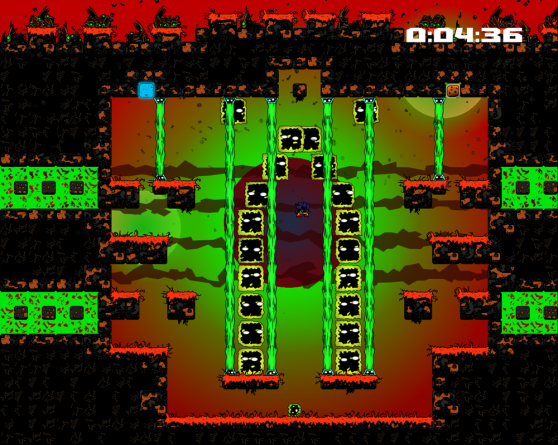 Above: Look, but don’t touch

The catch to achieving either goal is to simply not touch any of the creatures that reside in the world. Slamming into an enemy object resets everything and sends you right back to the level’s starting point immediately.

No continuing where you screwed up.

Succeed spectacularly or start over. Keep trying until you have every movement down perfectly.

I sense the invisible hand of a shoot-em-up fan behind the scenes of Fenix Rage. The type of person that believes wholeheartedly in resetting the game if just one bullet grazes their ship. Half measures don’t fly in their world. Only the perfect run counts. Anything less is intolerably scrubby.

This is definitely my type of game. 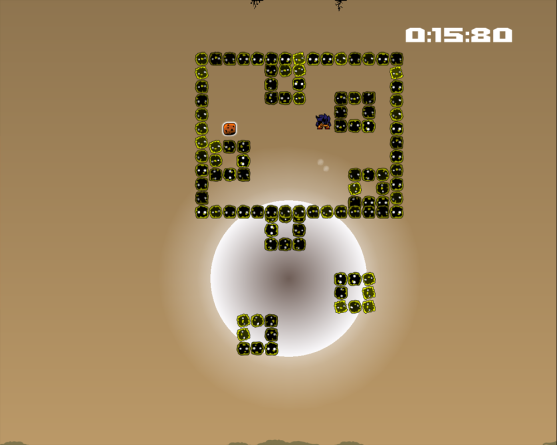 Plowing through Green Lava Studio’s hardcore platformer makes me think about another master 2D action development house: Treasure. Like the creators of Ikaruga and Gunstar Heroes, the designers of Fenix Rage give you a set of simple responsive abilities and straight-forward goals.

But you’re mistaken if you think that’s where the magic of these games lies. It’s actually in the thoughtful level designs that complements, then challenges, your abilities.

Every obstacle in Fenix Rage is meticulously designed down to the pixel to up your skill level in maliciously playful ways. If it looks like the character will only slide into an area safely with two dashes, I can guarantee that it is going to require exactly two well-timed dash inputs that will leave only a smidgen of room to spare. 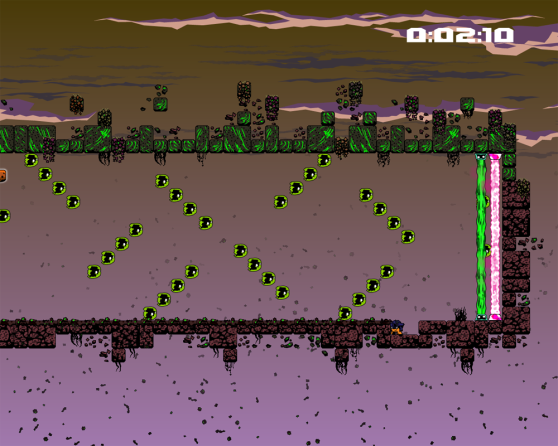 Above: Your thumb sore yet? No? Would you like it to be?

When a jumping puzzle appears to require a specific rhythm of command inputs to get by, you can count on dying a hundred times while trying to find the correct button timing. Once you do have it down, expect to repeat it until your fine motor skills have worn out.

Fenix Rage’s levels tease me with something that looks easy, but it is a clever bait-and-switch. The obstacles are always much more calculated and lethal than they appear, more so than what I’m use in similar games. When something inevitably catches me and tosses the character back to the start point, I can feel the game poking my ribs with a ‘gotcha’ rolling off its lips.

It’s playing my ego like a master and it knows it has me dead to rights, because there are no excuses for fucking up in this game. The controls are sound. The hitboxes are exact. It’s being crystal clear about how things work in its world. It’s not being unfair either technically or by design. Nothing Fenix Rage throws at me is impossible to tackle.

It leaves no room or loop hole for me to present a case that my failures are somehow not my fault. 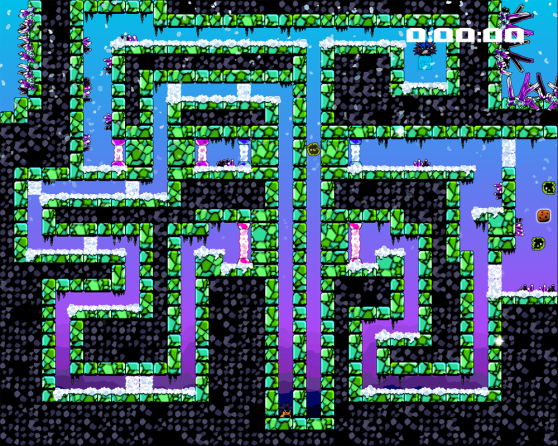 I only have two things to bring up here and they are more constructive tweaks than negative criticism. For one, spawning into a complex level can become disorienting. I’ve spent several moments staring at a complicated environment trying to locate where my character is. I finally jumped or dashed around to spot him, which risks slamming into a creature and getting reset back to the starting point.

Either the spawn point needs to have a sprite of its own that is visually clear, or spawning into the world needs a flashier, brighter animation effect.

The other visual hang up is that there is no way to view the entire level. Using an Xbox 360 gamepad (Fenix Rage’s preferred control method), I can hit X to snap the camera over to the exit portal. This is helpful, obviously, so I can at least get some bearing on which direction I need to go.

It would’ve been nice, however, if Green Lava Studios had expanded on this feature a little bit more. Perhaps allow me to pan the camera around the environment with the right thumbstick? (Even if it were to just get a brief glimpse of the areas immediately surrounding my character, like holding down or up in Sonic, The Hedgehog.)

Some of the levels in the second half are large and complicated. Being able to take a second to plan out how to attack them by seeing what I’m dealing with and where the cookie is located would really help. 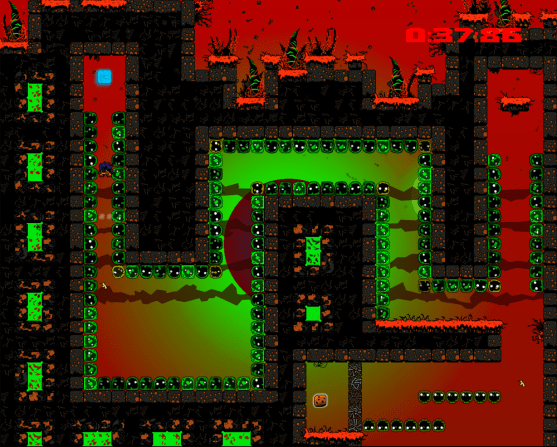 Above: A lesser player would’ve stopped trying to squeeze through there after the 50th time

If you haven’t caught on by now, Fenix Rage is difficult yet fair. I may love it for that, but others lack the blood pressure for it. If you’re prone to breaking controllers and screaming excuses at the screen, don’t risk the aneurysm by trying to conquer it. Even the obstacles in the excellent Super Meat Boy, although difficult, are a tad more forgiving than those I found in Fenix Rage.

Fenix Rage is hand crafted out of a gaming-phobe’s worst nightmare. With a facade that looks cute and accessible, it will come off as a calculative abusive experience for anyone with shaky play skills.

Skilled platform players, on the other hand, are going to absolutely love how tight, precise, and clever the level design is. It shows a respect for its audience, in that it will introduce a new concept on one level, then ramp the difficulty around that element up considerably, immediately.

It doesn’t pander to the player like a child, taking a long time to reach a modicum of difficulty. It’s under the impression that we’re here for a challenge and provides just that for us. Fairly, that is, so that the only one to blame for our violent rage quits are ourselves.

Fenix Rage released Sept. 24 for PC/Steam, with PlayStation 4 and Xbox One versions announced for 2015. The publisher provided GamesBeat with a Steam copy for the purposes of this review, but Stephen wishes it came with a bottle of aspirin.