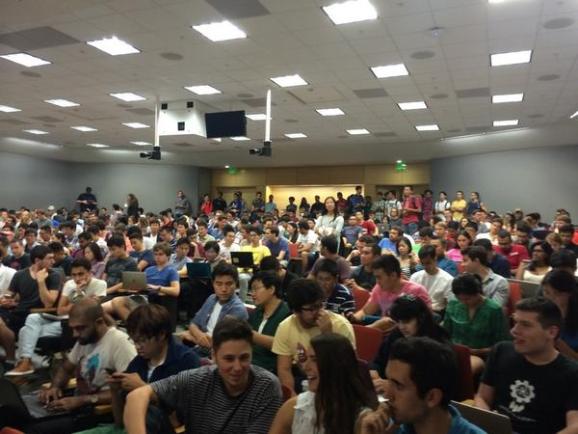 Stanford is offering a class in startups taught by some of the most successful tech founders in the valley. The class was packed on day one, as famed investor Sam Altman revealed some of the secrets he teaches aspiring startups at incubator Y Combinator. You can watch the full lecture with Altman and Facebook co-founder Dustin Moskovitz below. Through the semester, various guest lecturers who have built or seeded billion dollar companies will be added online.

The whole first lecture is worth watching, whether you’re itching to start your own company or just interested in tech culture.

For your convenience, though, here’s the best advice in 11 quotes.

1. “You should never start a startup just for doing so. There are much easier ways to get rich … the specific passion should come first and the startup, second.”

Both Altman and Moskovitz make a compelling case that startups are a very poor strategy for making money. Moskovitz shows a graph of how it’s far more likely that a smart person can be employee 100 at a billion dollar company and make just as much (if not more) than someone who starts their own company 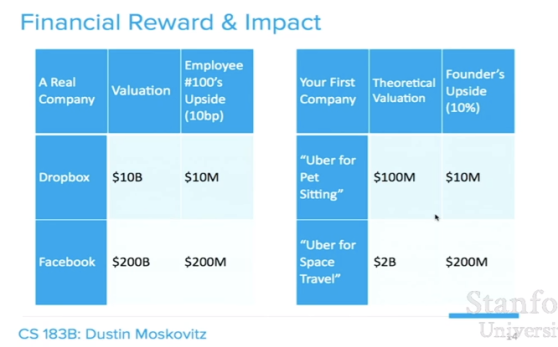 In Silicon Valley there are much quicker paths to becoming a millionaire than risking 10 years of your life on an unproven idea.

Moskovitz echos the common theme that startup founders should be inescapably passionate about their idea. Unless you feel you cannot live without building this product, you may not live through your company’s hard times, and you definitely won’t be able to recruit employees to follow you.

3. “Most great companies start with a great idea, not a pivot … if you look at the track record of pivots, they don’t become big companies.”

Altman dispels the myth that startup founders can go into a company with a mediocre idea and then evolve into a polished winner. He says that major pivots nearly always fail. And successful pivots are usually a change in direction closer to the problem that the founders meant to solve initially.

4. “The idea should come first, and the startup second … if you have several ideas that all seem pretty good, work on the one that you think about most often, when you’re not trying to think about work.”

I once heard that LinkedIn’s Reid Hoffman asked his friends about a few ideas and his friends advised him on LinkedIn (good call!). In other words, it’s not uncommon to want to solve many problems. But solve the one that you can’t stop thinking about.

5. “You need a market that’s going to be big in 10 years … this is one of the biggest systematic mistakes that investors make, they think of the growth of the startup itself, they don’t think about the growth of the market.”

Peter Thiel advises companies to try to create a monopoly. Own an entire sector. The only way to become a rich monopoly is to own the largest chunk of a sector that will be big in 5-10 years.

6. “In general, it’s best if you build something that you yourself need … you’ll understand it better than if you have to understand it by talking to a customer.”

This one is self-evident, if contentious. Silicon Valley gets a lot of guff for creating products for privileged yuppies. Altman seems to think this is the only way a good startup can begin.

7. “If it takes more than a sentence to explain what you’re doing, it’s almost always a sign that it’s too complicated.”

8. “More important [to success] than any particular startup is getting to know a lot of potential co-founders.”

Be a social butterfly. It’s hard to run a startup without any founding friends. Facebook, Paypal, and Google all had co-founders with very good relations, and many of them met through socializing.

9. “When really successful startup founders tell the story of their early days, it’s almost always sitting in front of the computer working on their product or talking to customers. That’s pretty much all the time. They do little else.”

In the early days, Altman advises founders not to hire a press team or sales reps. A good founder does everything him or herself so he or she can understand the product and how the customers want it to be better. I’m always surprised at how serial entrepreneurs with one previous exit under their belt act when they begin a new company: They can afford all the support they need, but they’ll take all the time in the world to hear about a customer complaint.

To grow a company by word of mouth, customers need to love the product. Like doesn’t cut it.

11. “The best ideas often look terrible at the beginning … the truly good ideas, don’t seem like they’re worth stealing.”

Obvious and compelling ideas are most likely already being built by large companies. Startups thrive in the spaces that seem crazy but are secretly brilliant.