The story of Tumug doesn’t end with his death. In the time it took me to kill him, his warlord boss was able to attract a second bodyguard. I went through the process to find and take him out, and I succeeded on my first try.

I hopped back into the menu to check on Sauron’s army and set a waypoint to direct me to the warlord I’d been aiming to kill for a couple hours when the bottom of my stomach fell out.

To my absolute horror, there he was: Tumug the Lookout back in action as if I had never killed him at all.

Here’s the worst part: This isn’t a bug (I thought it was at first).

As it turns out, I did kill Tumug that first time in the epic battle. He just has the ability to come back. And in the reality of the game, it makes sense. Hell, my character comes back from death over and over. It’s only fair that the bad guys get a second (or third) chance as well.

Here’s the problem. I’m a human being, and humans hate losing things once they earn them. Killing Tumug felt wonderful, but this sense of accomplishment doesn’t even close to the disappoint I felt at having that success ripped away. We have a name for this, it is called “sunk cost” or “loss aversion.” It’s the natural human response to losing something, and it means that going forward, all I’m going to think about are the hours I spent trying to kill Tumug that didn’t amount to anything.

I despise this design choice. I think maybe the idea was to create the possibility for a longer back-and-forth relationship between your character and powerful enemies, but it doesn’t work. All it does is pull the floor out from underneath the climax of my emergent story, and it is a new kind of backtracking.

I’ve gone on about this for a long time, and I bet you’re assuming that I hate Shadow of Mordor based on the way I’m writing about it. But I don’t. I would never feel this strongly about a game one way or the other if I didn’t love what it is doing at its core. And I have to acknowledge that your experience in this dynamic game could end up so completely different from mine that you’ll never end up with an issue like this.

Hey, remember how in The Lord of the Rings movies they have that Gollum creature and one character really hates and distrusts it and the other is willing to give it a chance? Yeah. That’s in Shadow of Mordor.

Remember how in everything that one guy is tormented by the murder of his wife and child? Shadow of Mordor has that covered.

Remember how in fantasy books you have to remember a lot of names and places and vague character motivations? Yeah. Shadow of Mordor.

As exciting as the emergent stories that pop out of Monolith’s nemesis system are, Shadow of Mordor’s actual narrative is very lacking. I don’t care about the goals of these characters. I don’t really know why I’m doing anything that I’m doing. Like a shadow, you can see it, but it has no substance.

Maybe this is all different for fans of The Lord of the Rings. I hope that it is. Again, that’s not me, and I won’t pretend to know what Tolkienites would enjoy. 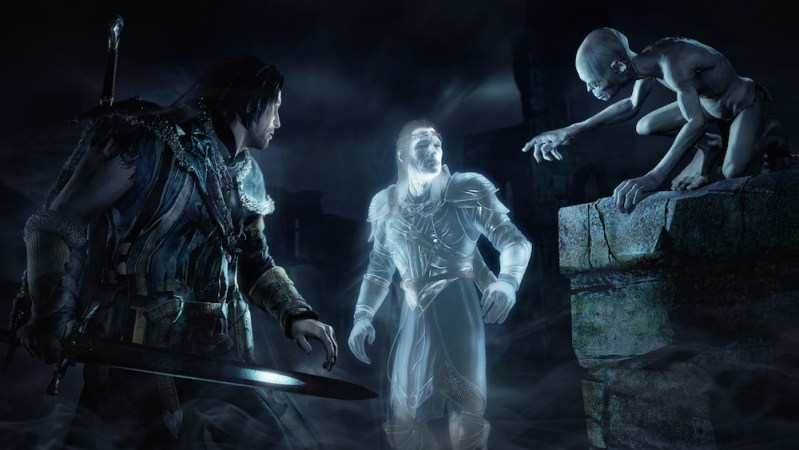 At its core, Shadow of Mordor is a fresh, exciting game. I love what it does to make every enemy feel special. Open-world games like Assassin’s Creed and Grand Theft Auto haven’t really done much to expand on the possibility for emergence in the genre. They look like a pair of Casio digital wristwatches compared to the complex moving parts of Shadow of Mordor’s intricate cuckoo clock.

But like any complex system, it’s easier to notice the effects of one misplaced component. The resurrecting bosses undo some of Shadow of Mordor’s magic, and the story and characters don’t do a ton to help.

I don’t want to turn everyone off of it. I think Shadow of Mordor deserves a huge audience. I like it bordering on loving it. Had Monolith tightened up a few things, I’d probably love it bordering on considering it one of the best games of the year.

Middle-earth: Shadow of Mordor is due out Sept. 30 for PlayStation 4, Xbox One, PlayStation 3, Xbox 360, and PC. Warner Bros. Interactive provided GamesBeat with a physical copy of the game for the PlayStation 4 for the purposes of this review.