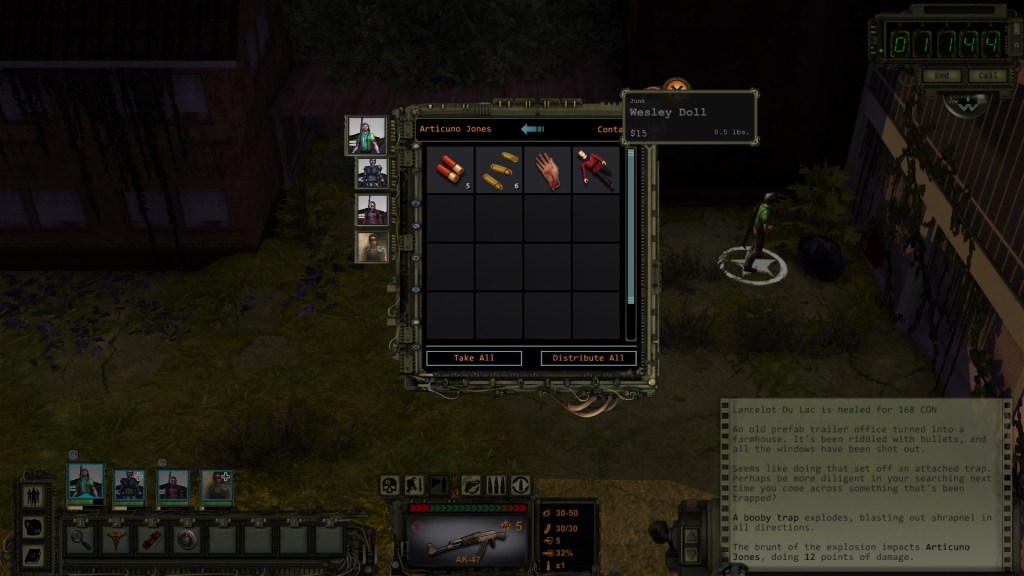 Above: Irrefutable evidence that Wil Wheaton will survive the nuclear holocaust.

A living environment unlike any you’ve seen before

Wasteland 2 also tests problem-solving skills in an unorthodox way. Each of your squad members levels up according to the experience they gain from quests, battles, conversations, and the use of various skills, which can be upgraded. 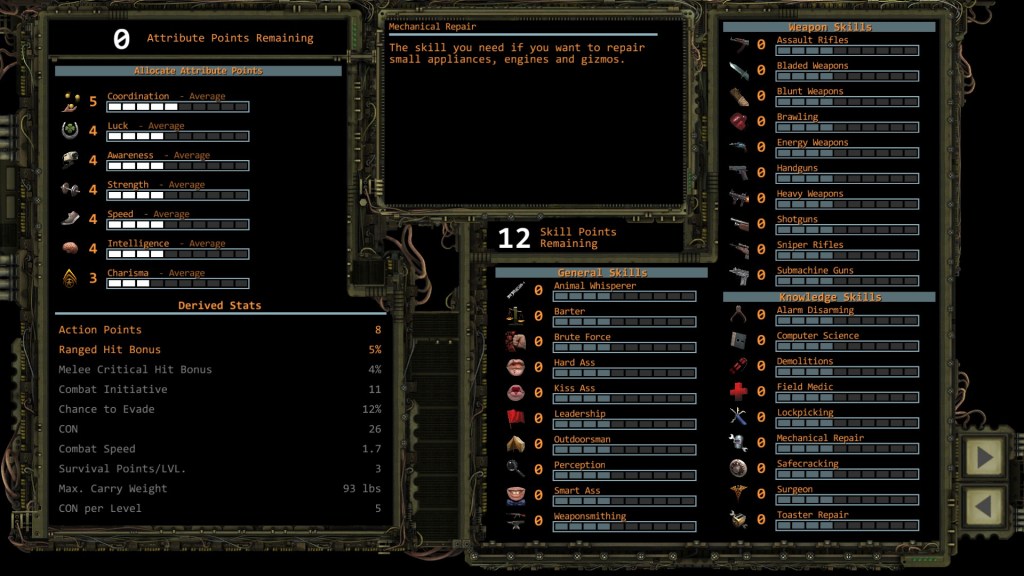 Above: The skill screen in Wasteland 2.

These skills are dramatically important because your squad typically receives very little help when tasked with a problem. A non-playable character will tell you to get from the bottom of a hill to the top, and that’s it. Doors, minefields, fences, computers, turrets, etc. will block your path, and it’s up to you to figure out how to navigate through all of this junk.

Wasteland 2 offers one tiny hint: When a player hovers over an interactive object, that object lights up. Most role-playing game series like Fallout and Dragon Age give players prompts on which skill to use, but Wasteland 2 does not.

Players face tens of thousands of these interactions throughout Arizona and Los Angeles. Some may find it tedious, but I really enjoyed the next-level thinking required to solve even the most mundane of puzzles.

The combat in Wasteland 2 is almost a mirror image of that found in the XCOM series. Squads assemble on a grid and take turns blasting each other in a slow, methodical strategy test. Players can take advantage of their environment by ducking squad members behind cover and blowing up flammable materials to wreak havoc on the enemy’s squad.

I noticed that Wasteland 2 has more destructible environment elements than the last few XCOM games. Everything even remotely flammable can be used to your benefit or disadvantage. The enemy AI is quite intuitive; if your squad is standing next to a barrel, the enemy will throw a grenade and wipe you all of the face of the Earth.

What makes the combat in Wasteland 2 stand out is the potentially high price of every battle. As I said in my hands-on preview, Wasteland 2 teaches players about its combat system by killing them repeatedly. I had to learn fast what to do and what not to do to ensure the survival of my squad, and I faced losses.

When a squad member dies in Wasteland 2, you get this screen:

Above: You deserved better, La Loca. How was I supposed to know that some crates explode?!

No. When they die, you just have a smaller squad now. Recruitment opportunities are extremely rare, and they have to be unlocked by your actions. If you are a jerk, NPCs may not join you.

I learned this lesson the hard way.

At the beginning of the game, I spent 30 minutes creating four custom members. I never gave any thought to the dozen or so pre-made members I could choose instead. Each member of my squad had a specialty, which is my typical strategy in these types of games. One member was big and tough, one did damage, one healed, and one knew a lot of skills.

Unfortunately, a reckless enemy grenadier threw a grenade near a mortar stockpile, killing four of his buddies and Ace McNeely (ironically the same name as the fallen NPC), my skill specialist. I assumed I could replace him, so I carried on. It was only later that I realized I now only have three members, and none of them knew how to unlock doors or do several other mandatory tasks.

I had to grind my squad up a few levels to teach them these skills. Squads can be anywhere from 1-7 members, and the game’s difficulty doesn’t adjust based on your hardships. If you only have one guy left, he will have to finish the game out.

These life lessons create a bond between you, the player, and your squad members. Their fragile little lives mean more to you than typical RPG teams. Thankfully, I only lost four members. If I had lost Madness, my crazy healing lady, I don’t know what I would have done. The same goes for Lancelot Du Lac, my armor-clad bruiser, or Articuno Jones, my hotshot weapons specialist. I’ve never felt more invested in a game’s playable characters than I did with Wasteland 2.

Squad members also don’t heal on their own, and supplies are limited. You can patch teammates up using various medical kits, but those run out pretty damn fast. I had to wander the wastes digging through trashcans and begging for supplies more than once.

I played the game on seasoned difficulty, which is the second-lowest of four levels. It was extremely tough, but in a good way. I was looking for an extremely challenging, take-no-prisoners RPG experience, and that’s exactly what I got. I can’t even fathom life at the higher difficulty levels, but some of you masochistic Dark Souls fans would probably delight in this torture.