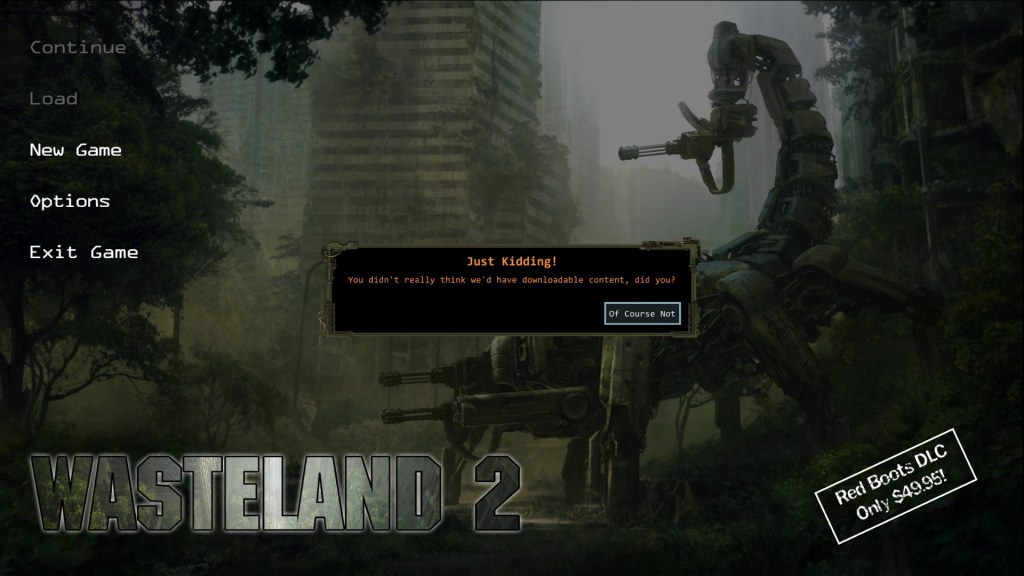 Above: Oh you got me good Fargo!

I loved Wasteland 2, but even I can admit that it looks like shit. Fargo’s team over at InXile clearly prioritized the title’s vast story and other features over the actual graphics. I’ve always felt that Indie titles can overcome a lack of funding by creating a unique art style, but Wasteland 2 doesn’t really attempt this either.

I wholeheartedly agree with the developers’ priorities, but certainly some people will be turned off by Wasteland 2’s lagging graphics.

My computer is right at the recommended specs, and I played the game at maximum graphic settings.

Here’s an example found immediately in the squad creation screen: 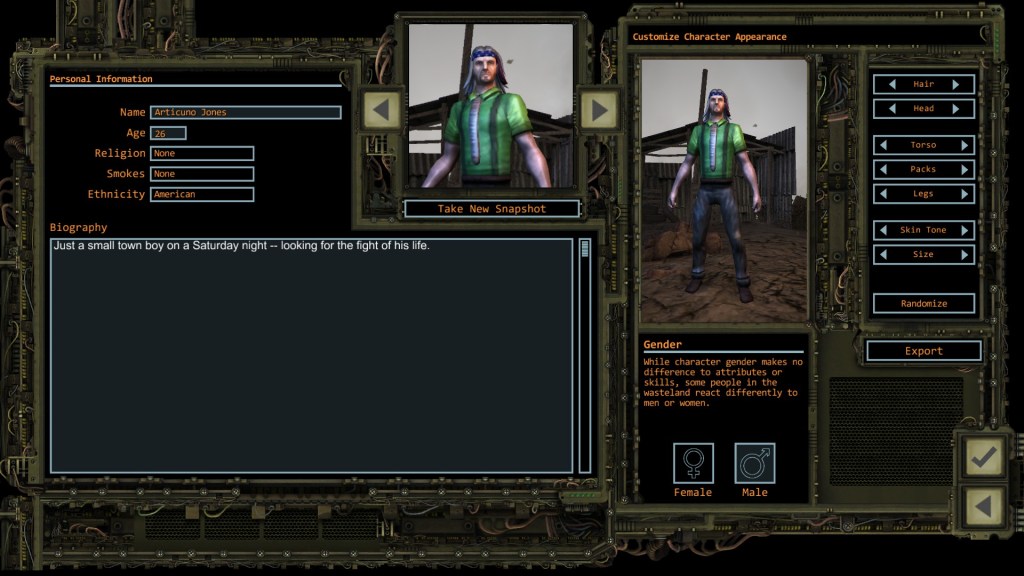 Above: Check out the low-level details on Jones’ poor face.

The in-game graphics aren’t much better. 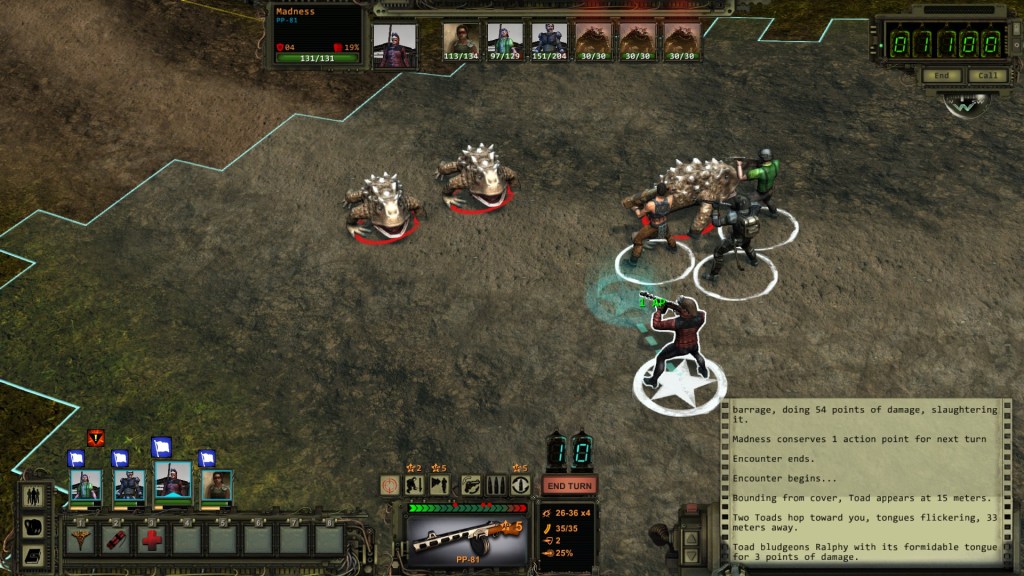 Above: Irradiated toads are a major nuisance in Wasteland 2.

I encountered a few problems during my 60+ hour journey through Wasteland 2.

The worst was a very serious bug I encountered while trying to clear the robot-infested city of Damonta. At this point in time, I was playing an earlier version of the game. It’s entirely possible that this bug has been ironed out (I didn’t have the time to play through 20 hours just to reach the same point again). Here’s what happened:

An evil scientist took over the town of Damonta. My squad checked the place out, and the people asked me to kill the bastard. I found the guy, and his robot army kicked my ass. I kept loading up previous saves and trying, but he was too strong. I needed healing, so I left Damonta to forage for supplies.

When I got back, the robot army had killed every living thing in the town. My bad, but I will at least make the scientist pay for this. I wiped the floor with him, but he now had robots in place of every person in the very large town. For some reason, these robots were included in my encounter with the mad scientist. The robots skipped their turn every time, but I couldn’t get out of the combat screen without fighting them.

I decided to fan my squad out across the map and find these random robots. This took almost two hours. Once I finally killed them all, I was still locked in the combat screen. Luckily, this quest was only a large side quest, so I was still able to progress through the game. But I was definitely pissed after wasting several hours on a huge encounter.

I also had about eight crashes to my desktop and several freezes throughout the early and current versions of Wasteland 2. I save frequently, and the title has an autosave feature, but it was still pretty annoying. 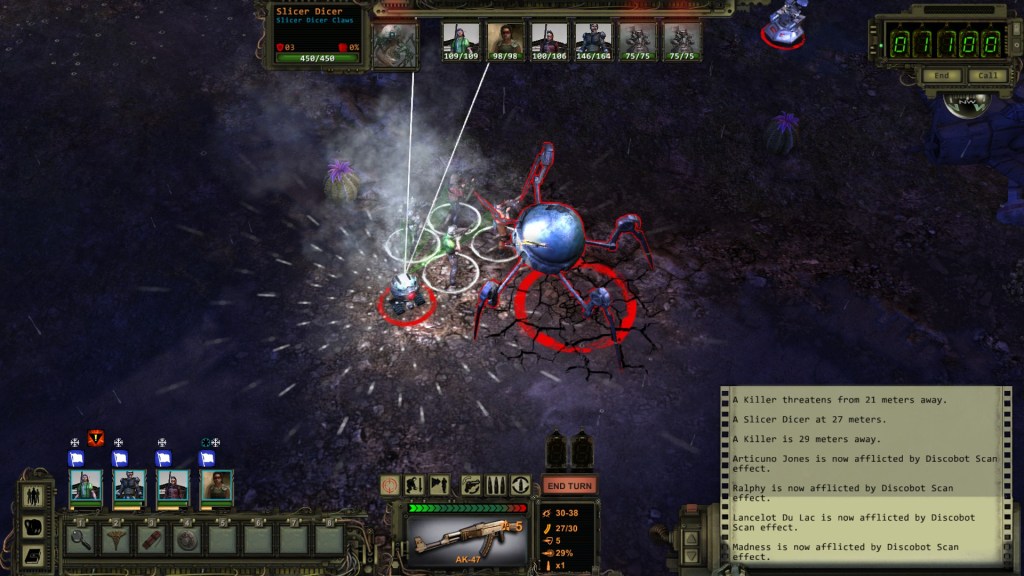 Above: I hate game code bugs, but I hate these disco-dancing robot spiders more.

The story lulls from time to time

Wasteland 2 does get repetitive and boring from time to time. The sheer magnitude of it has a lot to do with this, but I also encountered a few snooze-worthy quest pockets in the main storyline.

The biggest lull came when I first went to Los Angeles. I spent 35 hours roaming through the Arizona desert, and I expected a riveting story arch with different bad guys set in a new world.

What I found was the exact same setup as I had in Arizona. I had to wander around setting up radio antennas, just like the first few Arizona quests. The cities, though filled with grass instead of sand, looked the same. I found it really difficult to power through these first few L.A. quests.

The bad guys? Robots, crazy people, and religious zealots. The same core group found in Arizona and virtually every other post-apocalyptic game.

I also found the ending a little lacking. I won’t blow it for anyone, but I will say that I think a number of characters could have switched allegiances to really heighten the drama. It wasn’t a bad ending, and I enjoyed the game as a whole, but I think it could have done more.

Above: Seriously though. What is this thing? It looks like someone took the Volkswagon Beetle name a little too seriously.

I absolutely loved Wasteland 2. It succeeds on a variety of levels and manages to overcome its shortcomings by the sheer force of its overwhelming strengths.

The gritty world and its many pitfalls create a realistic post-apocalyptic experience where every choice can mean the life or death of any or all of your friends and enemies. The responsive combat system and environment test the limits of video game problem solving, and the size of Wasteland 2’s quest bank allows for countless hours of enjoyment.

The graphics aren’t great and InXile has a few kinks to work out in the game’s programming and storyline, but these become less and less apparent as Wasteland 2 sucks you into its brutal version of America.

Wasteland 2 is available now for Microsoft Windows, Mac OS X, and Linux. InXile Entertainment provided GamesBeat with a digital download code for the purposes of this review.