The next big game in Sega’s historical real-time strategy and combat series is being unveiled today: Total War: Attila. It is a kind of sequel to Total War: Rome II, the massive strategy game that debuted last year.

Sega developer The Creative Assembly gave me a preview of the game, and it looks like a lot of fun. This time, instead of building the Roman empire, you have to defend it from the invasions of barbarians. If you fail to hold back Attila’s armies, Rome will burn.

The preview of the 2015 title looks very exciting even in its pre-alpha test stage as you fly over the map of Europe, seeing everything from lush vegetation to arid deserts. Built on the polished game engine of Total War: Rome II, the Attila game is set in the same region as the last game but at a very different time of history. The production is very well done, and the trailer is truly movie-like.

“You built an empire beyond imagining, the pinnacle of human achievement and the envy of the world,” booms the voice of Attila the Hun in the trailer. “Did you think it would last?”

The core of Attila is the same as its predecessors. The game uses the Total War: Rome II engine, and it combines real-time combat between armies on a 3D battlefield with the Civilization-style strategic campaign where you manage your empire. But while last year’s Rome II enabled you to take over the known world, this time it’s different. The quality of the 3D graphics is getting better and better so that you can see flames licking the rooftops of a burning city while soldiers are clashing on the ground below. The sweeping views of the vast armies, with thousands of soldiers marching toward a city’s walls, are breathtaking. 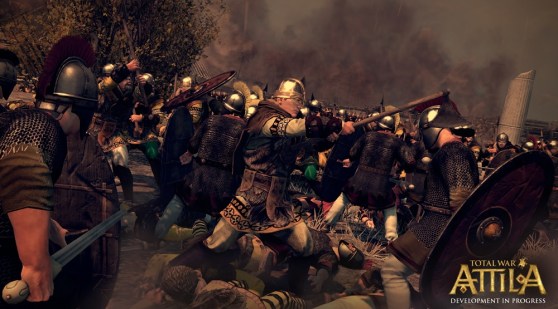 Above: Total War: Attila can zoom in on soldier-to-soldier combat.

Rome, the eternal city, is a glorious monument to power, culture, and learning. But it is circled by vultures.

“These are the death throes of Rome,” Attila says in the trailer, with drums beating. “The light of civilization dims.”

The real Attila probably wasn’t so eloquent. But it’s good drama, and that’s what The Creative Assembly, the U.K. studio that has created a whole series of Total War games, is aiming for. In these games, you can zoom out to see the strategic map of Europe on the edge of the Dark Ages. Then you can zoom in on cities and meet the enemy on the battlefield. The armies and landscapes are rendered in beautiful 3D graphics. You can zoom out to get a bird’s eye view of the action or zoom in during the battle to see individual soldiers fighting desperately.

The game opens in 395 A.D., when Roman civilization was on the verge of collapse. Climate change has forced migrations of the barbarian tribes from the East to the West. Those tribes come crashing like waves on the empire, which has now split into the Western Roman empire, centered in Rome, and the Eastern Roman Empire, centered in Constantinople. The Goths, the Visigoths, and the Vandals are all showing up. They flee the million mobile warriors of the Huns and smash into Rome. The campaign lasts about 70 years.

“Her armies are stretched then, and she finds it impossible to maintain her borders,” said Al Bickham, the communications manager for The Creative Assembly, in an interview. “You can see how our armies are stretched thin. It’s super tough for Total War veterans. It’s really about figuring what you can afford to lose and to consolidate to a position of power and then hopefully expand.” 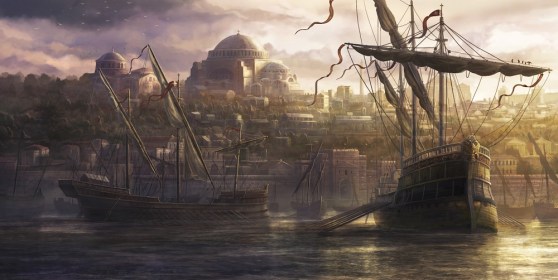 You can start out in command of the Western Roman Empire, fighting invaders in England and Germany. There are a bunch of other factions you can play. You can choose to defend your cities as they come under attack, or you can abandon them. You can burn a city down. If you retake it, you can assign an army to rebuild it. If someone attacks a city before it has been fully rebuilt, there will be gaps in the walls that make the city more vulnerable to attack.