It takes just a single turn in the new Civilization: Beyond Earth to realize that your first opponent is the planet itself.

I played through the first 250 turns of a traditional Civilization V: Brave New World game and then went through the first 250 of Beyond Earth, comparing the experience. Rest easy, Civ fans: CBE is the turn-based strategy game you remember from Civ V, both prettied and expanded. But it has a few changes that twist your gameplay.

The planet I chose was Protean, a fungal type with a handsome blue-green color scheme and plant life that fit the alien-mushroom theme. Players of Civilization should recognize the one-unit-per-hexagon setup from Civ V immediately.

Instead of starting with a small town as in the traditional Civ games, you start with a spaceship that you plunk down on the landscape, establishing your colony. That’s also how your human rivals will arrive later on. 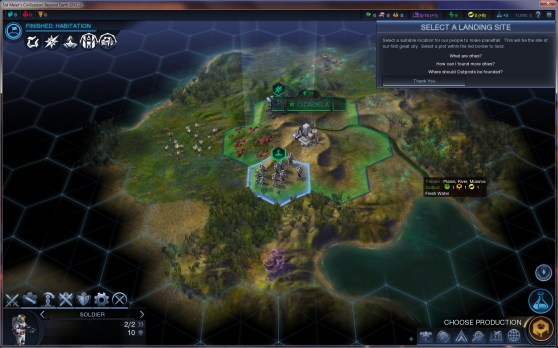 I chose the Brasilia faction (one of eight choices, each of which gives a different bonus – mine was +10% strength in melee combat), Engineer-type colonists (one of five, giving me a +2 production bonus), and the Lifeform Sensor ship, which immediately showed me clusters of aliens on my map.

My cargo was Weapon Arsenal, one of five choices, which gave me an instant unit of soldiers – CBE’s equivalent of Civ V’s warriors. I promptly moved them out and then watched in dismay as they started to die with nary an enemy in sight. I had unknowingly parked them on miasma, a marine-killing gas present on some hexes of the terrain.

Roving bands of barbarians would attack you in Civ V, and their equivalents are the fly-, bug-, and scorpion-like unintelligent aliens that roam the landscape in CBE. But the Earth itself would never slowly poison you.

Choose a harmonious path — or choke on the gas 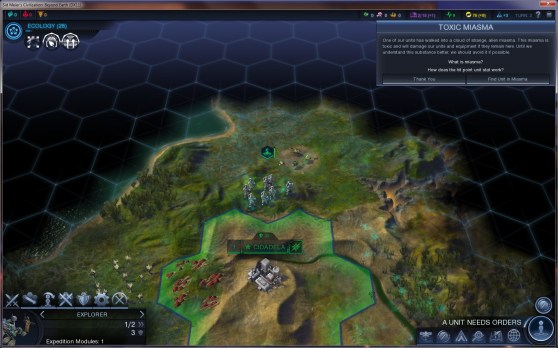 Above: Miasma is the blue stuff. Ow.

Which route you choose guides how your units will evolve (choose an upgraded form and all units of that type will automatically change, unlike in Civ V). Soldiers become Marines and then could become Brawlers or Sentinels or Disciples, depending on what you choose, and so on down the tree. Unlike Civ V, it’s not just dependent on your original faction or your tech.

Level up your Harmony far enough and your troops will actually heal in miasma. Sadly, I was nowhere near that level, so I kept moving.

I exposed a part of the map with aliens on it – the fly kind – and watched warily as I parked next to the group. Unlike the barbarians in Civ V, these buggers were neutral and didn’t attack. Later, they changed their mind and did, so I annihilated them. So much for my resolution to live in harmony with my native friends: Supremacy it is. 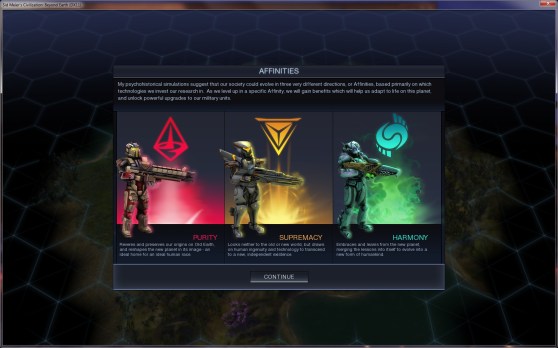 Above: Pillage, transcend, or cuddle: It’s your choice.